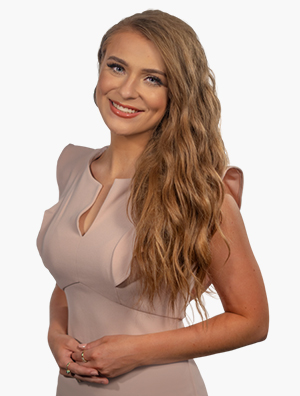 Allison Zeithammer joined the ABC57 news team in May 2020 as a Multimedia Journalist.

Allison is born and raised in South Bend, Indiana and is excited to be reporting in her home town! She went to Clay High School in South Bend, where she was heavily involved with interactive media classes and became a Friday Anchor for the schools’ small morning news show. Her experiences at Clay is where she found her passion for television news and reporting.

Allison took that passion and brought it with her to college. She graduated from Indiana University Bloomington in 2020 with a degree in Broadcast Journalism. During her time at IU, she was a reporter, anchor and social media manager for the schools student-run television station, IUSTV, where she volunteered every single week to tell Bloomington and campus stories. Allison also reported and anchored for IU NewsNet, another student-run television show. Her most memorable moment reporting at IU was going live multiple times during the Indiana University Dance Marathon, a 36-hour long marathon raising money for pediatric care.

Allison interned at ABC57 in the summer of 2019, where she developed a deeper love for journalism while shadowing and helping reporters and anchors daily. She also was an intern at WTIU/WFIU, a PBS station in Bloomington where she was an education reporter for both TV and radio. Her most memorable moment was producing a state-wide radio piece on the Red-For-Ed Rally in Indianapolis.

In her free time, Allison enjoys spending time with her family, friends and her two feline fur-children Bonnie and Clyde. Allison is also a huge movie connoisseur, so if she’s not with her loved ones, you more than likely can find her at the movie theater with a large popcorn and ICEE, or at the mall busting her budget.

Allison is dedicated her city, who strives to create meaningful stories to you! Do you have a story idea or tip? You can reach Allison through Twitter, Facebook or email.