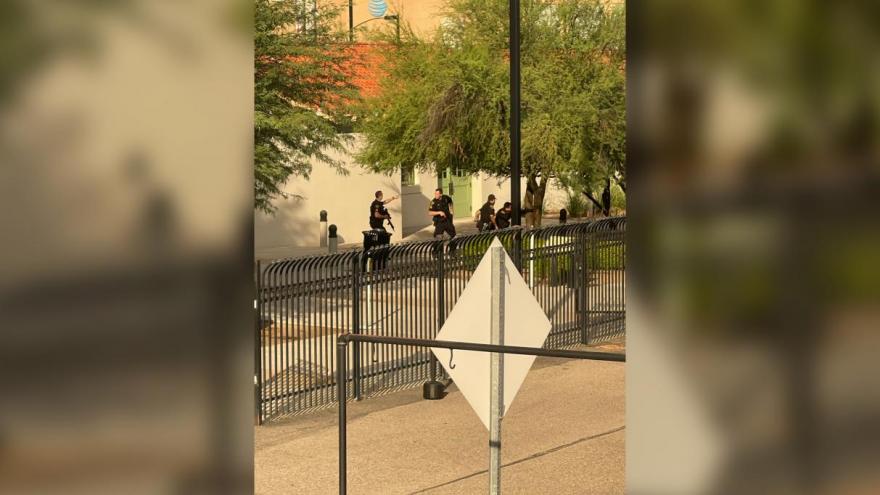 Evan Courtney shot this image of police responding to scene in Tucson, Arizona.

(CNN) -- A US Drug Enforcement Administration special agent was killed in a shooting on an Amtrak train in Arizona on Monday morning and two other DEA officers were wounded, police said.

One DEA special agent is in critical condition, and a Tucson police officer working on the DEA task force is in stable condition at a hospital, Tucson Police Chief Chris Magnus said.

The incident happened during a routine check for illegal guns, money and drugs, Magnus said.

Several officers boarded the train and made contact with two people on the second level of the double-decker train. While officers were detaining one person, a second person took out a handgun and opened fire on the officers, according to Magnus.

A gunman was pronounced dead after barricading himself in a bathroom, the chief said. A second suspect is in custody.

There were 137 passengers and 11 crew members on board, Amtrak said. All were evacuated.

"There are no reported injuries to the crew or passengers," Amtrak said in a statement to CNN.

Evan Courtney said he didn't see or hear what happened, but he was in a lounge car when "people came running through yelling, 'Shots fired!'"

Courtney said he then grabbed his backpack and ran. He said he huddled with strangers in a hallway, looking out the window.

"I looked out of the window and saw SWAT with assault rifles huddled behind barricades," Courtney told CNN.

"After about 15 minutes, police ran to us and told us to get out of the car and run in the opposite direction, out of harm's way."

A video live-streamed by Virtual Railfan appears to show police on a platform in Tucson confronting a shooter.

In the video, shots are heard near an Amtrak train, prompting an officer and police K-9 to respond. While entering the train they are confronted by the gunman, who shoots at the officer as he runs for cover. The shots also send passengers on the platform running for safety.

About 15 minutes later, more officers respond to the scene. An officer is seen taking cover behind a structure on the platform. A series of gunshots ring out and someone yells, "Put your hands up."

Shortly after, a second officer joins his partner behind the structure. More shots are fired, and one of the officers taking cover runs down the platform.

Passengers start trickling out of the train once the shooting stops. They run toward the officers who point them where to go.

An earlier tweet by Tucson police said it was a "very active scene" and asked people to, "please avoid the area" on Toole Avenue, where the Amtrak station is located.

The train, traveling from Los Angeles to New Orleans, had arrived at the station just before 8 a.m. local time Monday.

The FBI is taking the lead in the investigation, according to the bureau and the Tucson Police Department.

Correction: An earlier version of this story misstated the name of the US Drug Enforcement Administration.