10,000 mink are dead in Covid-19 outbreaks at US fur farms after virus believed spread by humans 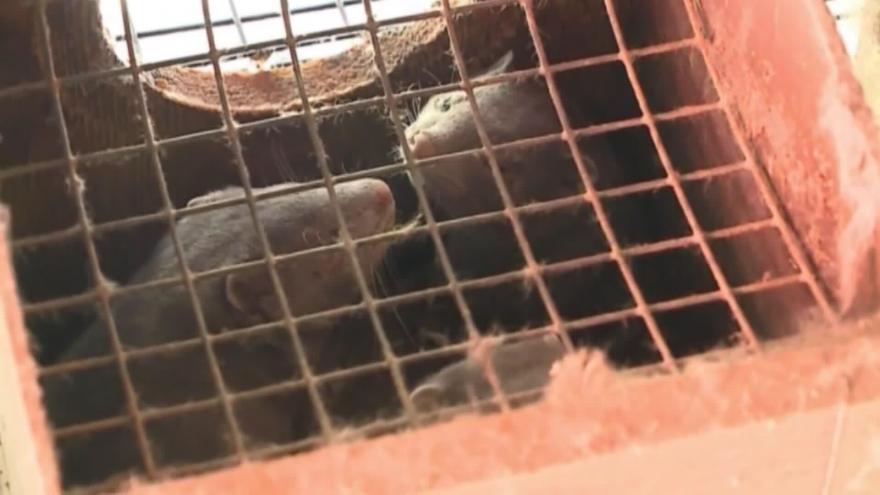 There are dozens of mink farms like this near Medford, Wisconsin, where one such farm is experiencing an coronavirus outbreak among the animals.

(CNN) -- Thousands of mink have died at fur farms in Utah and Wisconsin after a series of coronavirus outbreaks.

In Utah, ranchers have lost at least 8,000 mink to Covid-19 among the animals known for their silky, luxurious pelts.

The virus first appeared in the creatures in August, shortly after farmworkers fell ill in July, according to Dr. Dean Taylor, State Veterinarian of Utah. Initial research shows the virus was transmitted from humans to animals, and so far has not seen any cases of the opposite.

"Everything we've looked at here in Utah suggests its gone from the humans to the animals," Taylor told CNN. "It feels like a unidirectional path," he said, adding that testing is still underway. Utah's was the first outbreak among mink in the United States.

On Friday, Kevin Hoffman, a spokesperson at the Wisconsin Department of Agriculture, Trade and Consumer Protection, told CNN 2,000 mink have died from the coronavirus at a Wisconsin farm as well. Officials have quarantined the farm, Hoffman said in a release, meaning no animals or animal products may leave the Taylor County premises.

Dr. Keith Paulson with the UW-Madison Veterinary School Diagnostic Laboratory told CNN affiliate WISN that he noted "significant mortality in the mink" and that three workers there had recovered from the virus after displaying "mild to moderate clinical signs."

Other cases have been detected in the Netherlands, Spain and Denmark, according to the US Department of Agriculture.

The USDA's National Veterinary Services Laboratories has confirmed cases of SAR-CoV-2 -- the virus that causes Covid-19 -- in dozens of other animals, including dozens of dogs, cats, a lion, and a tiger.

Mink, which are closely related to weasels, otter and ferrets, appear to suffer similar symptoms to humans. Difficulty breathing and crusting around the eyes are usually seen, but the virus progresses rapidly, and most infected mink are dead by the next day, according to Taylor.

It's unclear what makes mink such a susceptible species, while others appear to be unaffected.

The cluster of cases in Utah has spread to nine farms, but Taylor warns that "we're still in the middle of the outbreak."

Each farm is under quarantine with only essential workers permitted on site. Farmworkers are being directed to use proper protective equipment at all times.

The pelts from most of the mink that have died from the virus have been either contained and buried or incinerated.

Taylor said that no pelts have left the state.