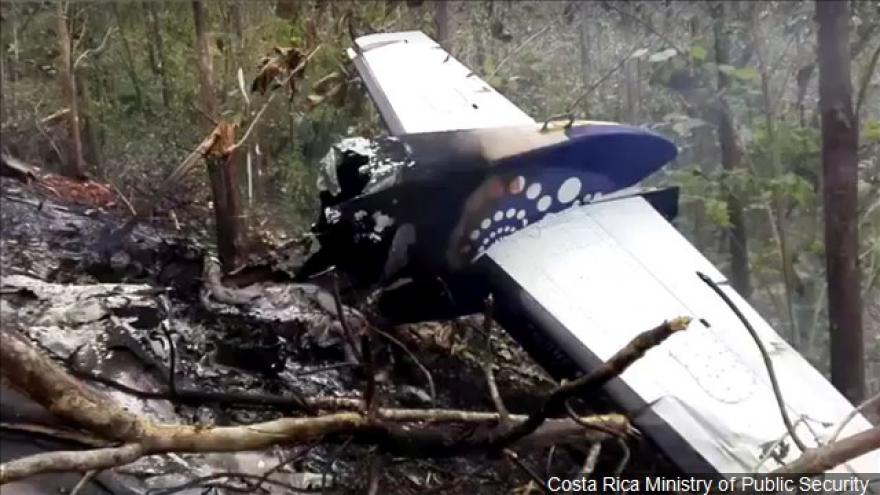 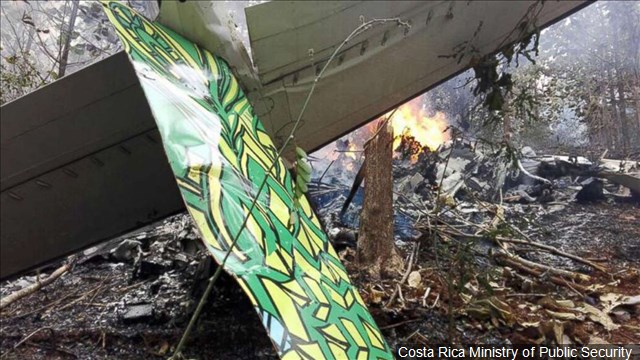 Authorities said they were focusing on recovering the victims' bodies and would begin an investigation into the cause of the crash first thing Monday. Costa Rica Ministry of Public Security

The single-engine turboprop's two Costa Rican pilots also died in the crash, President Luis Guillermo Solis Rivera said in a statement posted on social media. There were no survivors.

Costa Rica's Ministry of Public Security posted several images of the wreckage on its official Facebook page, showing the plane engulfed in flames in a wooded area, with smoke billowing from charred rubble.

It was not immediately clear what caused the crash, which occurred early Sunday afternoon in Nandayure, a region in Costa Rica's Guanacaste province.

Authorities said they were focusing on recovering the victims' bodies and would begin an investigation into the cause of the crash first thing Monday.

Earlier Sunday, heavy winds had forced the plane's pilots to land at another airport and delay their arrival in Punta Islita, Teletica said.

"The government vows to do everything necessary to help the victims' family members in whatever they need in this difficult moment and sends them the solidarity of all the Costa Rican people," Solis said.

The private aircraft, a Cessna 208B Grand Caravan registered as TI-BEI, was part of Nature Air's fleet, officials said. Officials from the airline could not be immediately reached for comment.

The Caravan is a popular utility aircraft that's routinely used for carrying passengers or cargo. More than 2,500 have been built since the aircraft entered service in 1984, according to the Aviation Safety Network.

One of the pilots who died in the crash was the cousin of Costa Rican ex-President Laura Chinchilla, the former leader said on her Twitter account.