10% of TSA employees called out Sunday as shutdown continues 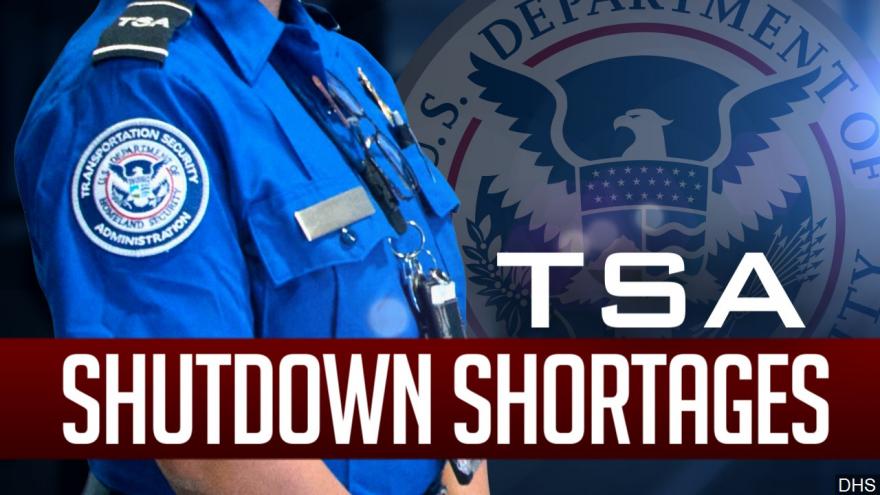 (CNN) -- The Transportation Security Administration said one in 10 of its employees scheduled to work Sunday took the day off, with many employees citing "financial limitations" preventing them from working.

"Yesterday's complete figures show that TSA experienced a national rate of 10 percent of unscheduled absences compared to a 3.1 percent rate one year ago on the same day, Jan. 20, 2018," the TSA said in a statement Monday. "Many employees are reporting that they are not able to report to work due to financial limitations."

As CNN previously reported, TSA screeners have called out from work through the shutdown, and the problem has taken on heightened attention as the shutdown has worn on and unscheduled absences have ticked up significantly relative to last year.

The TSA statement in the fifth week of the longest government shutdown on record underscored the particular impact the funding impasse has had on the nation's airports and the employees handling security screenings without pay.

The statement said that despite the high rate of unscheduled absences, wait times were "within normal TSA times" of 30 minutes in standard lanes and 10 minutes for TSA PreCheck flyers. The statement acknowledged that "some airports experienced longer than usual wait times."

While the national call out numbers are made public, TSA management sent a memo last week advising key agency officials at airports to not make details public about individual airports.

"Do not offer specific call out data at your airport," the email stated. "You can say you have experienced higher numbers of call outs but in partnership with the airport and airlines you are able to manage people and resources to ensure effective security is always maintained."