10 ways to conquer adult nightmares and get better sleep 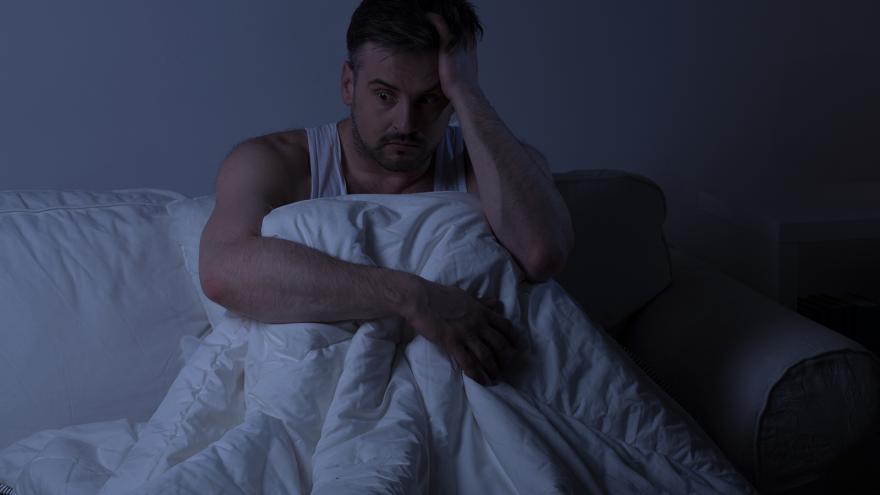 (CNN) -- We leave behind our fears of monsters under the bed as we say goodbye to our childhoods, but one can follow us into adulthood and loom over our heads.

Nightmares are more common in childhood, but anywhere from 50% to 85% of adults report having occasional nightmares.

Almost everyone can experience nightmares — and especially during the pandemic.

"With a combination of additional stress and safer-at-home orders, more people are struggling with nightmares," said Jennifer Martin, a professor of medicine at the David Geffen School of Medicine at the University of California, Los Angeles, and member of the American Academy of Sleep Medicine's board of directors.

If your days arefilled with online school for the children, social distancing, masks and a daily death toll, isn't it no wonder adults are having nightmares at night?

"Dreams do usually incorporate things that happened during the day, leading some researchers to hypothesize that dreams and rapid eye movement sleep is essential for memory consolidation and cognitive rejuvenation," said Joshua Tal, a sleep and health psychologist based in Manhattan. "Nightmares are the mind's attempts at making sense of these events, by replaying them in images during sleep."

Nightmares are what the American Academy of Sleep Medicine call "vivid, realistic and disturbing dreams typically involving threats to survival or security, which often evoke emotions of anxiety, fear or terror."

If someone has frequent nightmares — more than once or twice weekly — that cause distress or impairment at work or among people, he or she might have nightmare disorder. Treatments include medications and behavioral therapies.

Addressing frequent nightmares is important since they have also been linked to insomnia, depression and suicidal behavior. Since nightmares can also cause sleep deprivation, they are linked to heart disease and obesity as well.

Trying out these 10 steps could help you ease your nightmares and improve your sleep and quality of life.

Nightmares, Martin said, occur during rapid eye movement sleep, the phase during which our muscles relax and we dream. Waking up during REM sleep enables recollection of the dream and resulting distress.

"One of the most effective ways to treat nightmare problems in adults is actually to get them sleeping more soundly (so) they wake up less often," Martin said.

2. Cut back on alcohol

"A lot of people use alcohol as a way to wind down and feel sleepy at the end of the day, but it's really not the right solution," she added. Instead, try herbal teas and other beverages conducive to sleep. If drinking was theonly part of your relaxation routine, chat with your partner or read instead.

One drink more than three hours before bedtime is OK, Martin said. Just pay attention to whether it causes a post-dinner nap and alertness at bedtime, and eliminate that drink if it does.

Snacking can boost metabolism, which causes your brain to be more active and could lead to nightmares, according to the National Sleep Foundation.

While some people sleep better after eating a light snack, you should stop eating two to three hours before bedtime. If you notice that you have nightmares afterward, try avoiding nighttime snacking or heavier meals before bed.

Some medications can prompt nightmares by interrupting REM sleep.

"If people can identify that their nightmares either started or increased when they had a change in their medication, that's definitely a reason to talk to their doctor" about their medication schedule or alternatives, Martin said.

Melatonin, while a popular sleep aid, influences our circadian rhythm that regulates REM sleep, and can lead to more or fewer nightmares. If you want to take melatonin for better sleep, work with a sleep specialist to ensure you're taking it at the right time and not compounding the problem, Martin said.

Progressive muscle relaxation — tensing muscle groups as you inhale and relaxing them as you exhale — has been effective for reducing nightmares.

"The body also has an innate relaxation system: the parasympathetic nervous system, aka the 'rest and digest' system." Progressive muscle relaxation and other relaxation activities can help activate that system.

Write down your worries to get them all out ahead of time, lest they rear their disquieting heads at night. Journaling can be helpful for alleviating nightmares and stress in general, Tal said.

Since our nighttime observations can appear during sleep, "spend some energy engaging with things that are more emotionally neutral or even positive" before bedtime, Martin suggested.

During the pandemic, our everyday lives are looking pretty scary, too. "Reading the news media and then hopping into bed is more likely to trigger disturbing and upsetting dreams than looking through pictures from your last vacation with your family," she added.

Since nightmares can be learned behavior for the brain, this practice involves writing down in detail the narrative elements of the dream. Then rewrite the dream so that it ends positively. Just before falling asleep, set the intention to re-dream by saying aloud, "If or when I have the beginnings of the same bad dream, I will be able to instead have this much better dream with a positive outcome."

"By practicing a rewrite during the daytime, you increase your chances of having them at night while you're sleeping instead of your nightmare," Tal said.

9. Use a white noise machine

Silence is key in a sleep routine, but "for people who either don't like it to be completely quiet or who are awakened by noises they can't control during the night," background noise "is a good strategy," Martin said.

Try a fan or a white noise machine or app for several consecutive nights to help your brain adapt, she added.

10. Check up on your mental health

If nothing works and you're still having nightmares, talk with a therapist or sleep specialist.

"Nightmares might be a sign of a larger issue, such as PTSD or a mood disorder," Tal said. "It is possible to treat the nightmares without treating the underlying disorder, but it may also be helpful to treat both the symptom and the disorder.

"There has been great progress on psychological treatments for nightmares, insomnia, anxiety and mood disorders," Tal added. "Do not be afraid to ask for help; psychotherapy works and it is often short term and accessible."