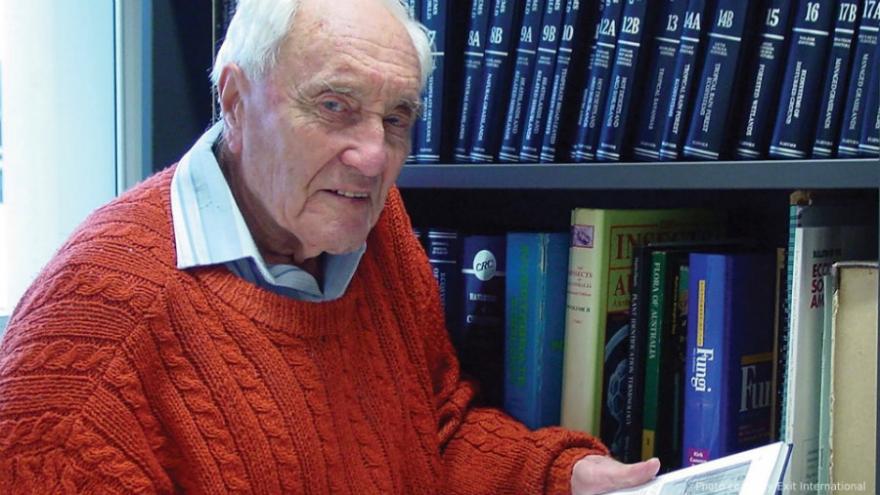 (CNN) -- A 104-year-old Australian scientist who had campaigned for the legalization of assisted dying in his home country has ended his life at a Swiss clinic, a representative from the pro-euthanasia group Exit International said.

David Goodall, a respected botanist and ecologist, died Thursday at the Life Circle clinic in Basel, Switzerland, after administering a lethal drug under the guidance of doctors.

Exit International, which represented the scientist, said Goodall passed away while listening to Beethoven's "Ode to Joy."

The grandfather of 12 had attracted over $20,000 in donations from the public to help fund his journey to Europe from Perth, Australia, earlier this month.

Speaking to CNN on Tuesday, two days before he was due to die, Goodall said that his life stopped being enjoyable "five or 10 years ago," in part because of his failing mobility and eyesight.

"My life has been out in the field (working), but I can't go out in the field now," said Goodall, who needs a wheelchair and walking frame to get around, during an interview at his Basel hotel.

"I would love to be able to walk into the bush again, and see what is all around me," added the father of four, who during his long life had three wives.

"I could still enjoy birdsong," he added. "But my lack of vision would seriously impair it."

Goodall told CNN he would have preferred to have died when he lost his driver's license in 1998, adding that the loss of independence at 84 was a big moment in his life.

"At my age, I get up in the morning. I eat breakfast. And then I just sit until lunchtime. Then I have a bit of lunch and just sit. What's the use of that?" said the scientist, who appeared to have lost none of his sense of humor on Tuesday, wearing a top inscribed with the words "Aging Disgracefully."

Euthanasia is illegal in Australia, thought the state of Victoria is planning to allow assisted dying from mid-2019. Goodall's home state of Western Australia is currently debating whether to introduce the policy.

Goodall said he hoped his story would lead to the legalization of assisted dying in other countries.

"I'm looking forward to it," he said of his imminent death. "I'm happy that this period beforehand has been used to interview me, and I've brought the ideas of euthanasia to light."

"What I would like is for other countries to follow Switzerland's lead and make these facilities available to all clients, if they meet the requirements, and the requirements not just of age, but of mental capacity."

Several US states have a form of physician-assisted suicide, as do a small number of countries including Japan, Belgium and Switzerland.

Born in London in April 1914, just months before the outbreak of World War I, Goodall and his family moved to Australia when he was a child.

The respected botanist and ecologist went on to hold academic positions across the world, including in the United Kingdom, the United States and Australia.

After his retirement in 1979, Goodall edited a 30-volume series of books called "Ecosystems of the World," written by more than 500 authors. In 2016, the professor was awarded the prestigious Order of Australia Medal.

A member of Exit International for over 20 years, Goodall said earlier this week that he did not fear death, but instead would "welcome it when it comes."

"The process of dying can be rather unpleasant, but it need not be," he said. "And I hope it won't be for me."