11 of 22 Chinese miners trapped in gold mine rescued, ten others dead 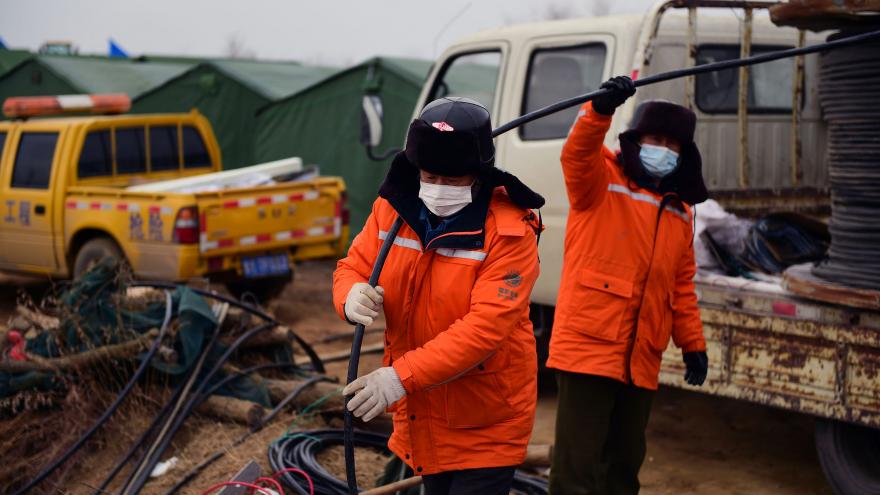 (CNN) -- Eleven miners who were trapped in a gold mine for more than two weeks in eastern China have been rescued, while ten so far have died, Chinese state media reported.

Authorities have been racing to dig out 22 people trapped underground in the city of Qixia, Shandong Province, since an explosion blocked their exit on January 10.

The first miner was rescued on Sunday morning at about 11:13 a.m. local time, and was in "extremely weak condition," according to state-run news wire Xinhua. State broadcaster CCTV said he was sent to hospital.

The next 10 were lifted from a deeper section of the mine. At least one of them was injured, according to CCTV, but it is not clear how seriously.

A total of ten miners have been found dead, according to Yantai city mayor Chen Fei speaking on Chinese state media.

One miner's body was recovered on January 21 and nine more recovered Monday, media reported. Rescuers are still searching for one more miner out of 22.

Authorities had previously said 10 people who were stuck in the mine's chamber 600 meters (1,969 feet) underground were in contact with the outside world after rescue workers drilled a channel into a section of the mine and installed a telephone line, according to Xinhua. It is not yet clear if those 10 are among those who have been rescued.

Efforts have been underway to reach the workers since the blast occurred about 240 meters (800 feet) from the mine's entrance, but Chinese officials had said Thursday it could take 15 days to drill through 70 tons of debris trapping many of the miners.

Food, medical supplies, blankets, and batches of nutrient solution have been passed down a shaft to the 10 workers who have been located. They are in good physical and psychological condition, Xinhua reported.

According to state media, rescue teams are hoping to pull the miners out through a 711-millimeter (28-inch) diameter passage. By noon Thursday, rescuers had drilled 18 meters (59 feet) into the mineshaft but heavy debris could slow efforts.

Concern has been growing for the uncontacted miners. Some of the workers in the chamber are trying to help rescuers locate their missing colleagues by using laser pointers and loudspeakers, but they have received no response, Xinhua reported.

Rescuers have also drilled smaller channels into other sections of the mine and are lowering nutrient solutions and other means to detect breathing or movement, but no signs of life have been encountered.

Rescue workers are reported to have first heard knocking sounds from those trapped on January 17, followed by pulling on iron ropes. On Monday, miners were able to get a note to rescuers. Xinhua quoted the note as saying: "We are heavily exhausted and in urgent need of stomach medicine, painkillers, medical tape, external anti-inflammatory drugs, and three people have high blood pressure."

Explosions and deaths are not uncommon in Chinese mines. In September, at least 16 workers in southwestern China died after they became trapped underground in a coal mine and exposed to unsafe levels of carbon monoxide, state media reported.

And in 2016, dozens of workers were confirmed dead after a gas explosion at a coal mine in the city of Chongqing.