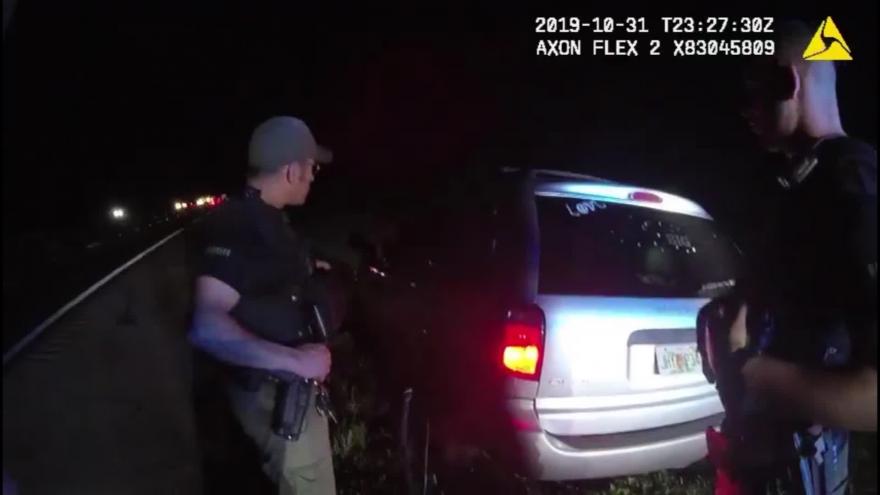 (CNN) -- A 12-year-old girl called police after her mother passed out from a heroin overdose on the side of the highway in Volusia County, Florida, on Thursday night.

The woman's daughter called 911 from the family's minivan that was parked on the side of I-4 after the mother, Tiffany Smith, pulled over and lost consciousness, the Volusia County Sheriff's Office said in a press release on its website.

"Um, my mom won't wake up and we're on I-4 in the car," the daughter says in a panicked voice on a 911 call released by the agency.

When deputies arrived, they found Smith unconscious with her 12-year-old daughter, a 7-year-old boy, a 1-year-old boy and two dogs in the minivan.

Paramedics administered a dose of Narcan to revive her, police said. Afterward, she can be heard on body camera footage telling deputies she was on a five-hour trip to her sister's in South Carolina with the children when she began to experience back pain.

"I honestly took heroin because my back was hurting," Smith, 28, told the officials.

"Is that something you should be taking for your back?" a deputy asks.

"It's not, but I had no pain pill and my back was hurting and I'm making a five-hour trip," she responded.

Smith was taken to AdventHealth Fish Memorial hospital in stable condition. She was charged with neglect but was not immediately booked into Volusia County Branch Jail pending her treatment at the hospital, police said.

The children were not injured and were placed in the custody of their grandmother, police said in the release. The dogs were turned over to animal control officers.