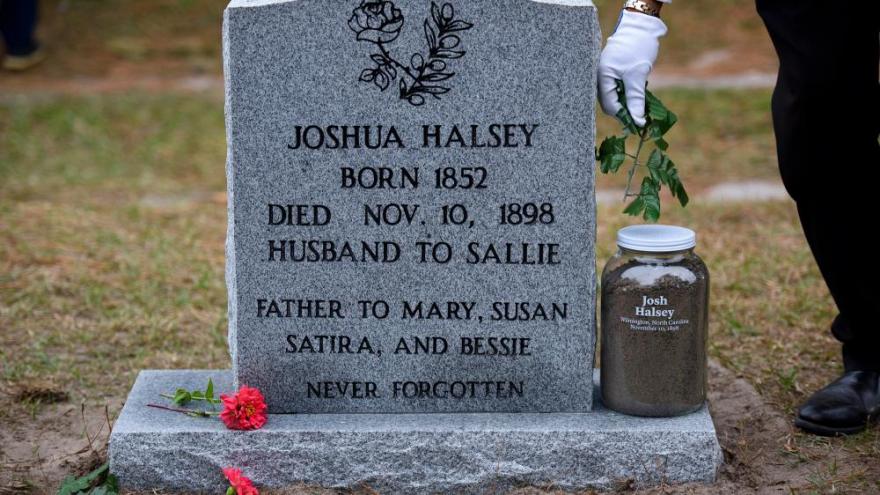 Halsey now has a headstone at the cemetery where he was buried.

(CNN) -- Joshua Halsey was murdered in the November 1898 massacre of Black people in Wilmington, North Carolina, by White supremacists. On Saturday, 123 years later, Halsey was honored with a funeral.

Halsey's unmarked grave is the first identified of the victims -- thought to be more than 100 by the Third Person Project, a historical research group. There could be as many as 250 victims, John Jeremiah Johnson, who worked with the project, told CNN.

It was the tireless efforts by the project to locate the unmarked graves and no small amount of sleuthing -- not just combing through a Black cemetery's records -- that led to the discovery.

That's after a state report in 1998 -- the 100th anniversary of the massacre -- identified two of the victims of the massacre: Halsey and Samuel McFarland.

Elaine Cynthia Brown, a Halsey descendent, said the discovery was "surreal' for the family.

"We were in shock, because this is so unprecedented," Brown told CNN. "But then we said, 'You know what? Why not Joshua?'"

"Why not be the beacon of what can happen when we sort of unearth the truth, uncover the truth and unpack it?" Brown said. "You know, this is where it's going to start and the stories are going to come out as more victims are found, and we hear their stories. But we now know that it exists. We now know that we can change it. We now are getting the true history of what happened here."

At the time of the massacre, Wilmington -- like Tulsa, Oklahoma, before the massacre there -- had a thriving Black community that had formed a building and loan association, built libraries. They "were employed in all segments of the workforce, as professionals, skilled artisans, government employees, maritime crew members, industrial workers, laborers and domestics," the 1898 Wilmington Race Riot Commission found.

Black people were even part of the city's government that White supremacists set out to destroy. Shortly after the Democratic Party -- the party of White supremacy at the time -- won the county's election by intimidating Black voters and tampering with the returns, according to the commission, armed White men burned down The Daily Record, Wilmington's Black newspaper and then began attacking Black people.

"On the same day, local elected officials were forced to resign, and were replaced by white supremacist leaders," according to a timeline of the events by the North Carolina Department of Natural and Cultural Resources.

It is often cited by historians as the only violent coup d'etat in the United States. The massacre forever changed Wilmington's culture.

"The events of the 1898 coup marked a turning point in the post-Reconstruction South that changed the trajectory of race relations in North Carolina and marked the start of Jim Crow laws in the state, which further enforced racial segregation through the mid-20th century," according to a guide of the events published by the William Madison Randall Library of the University of North Carolina Wilmington.

The ceremony is part of series of events planned from November 1 to 10 by the county, the city of Wilmington and several organizations to commemorate the massacre and honor its victims.

On Saturday, a horse-drawn hearse carried to the funeral soil collected from the site of Halsey's home. Rev. William Barber II of the Poor People's Campaign -- a social justice movement inspired by Martin Luther King Jr. -- gave the eulogy, surrounded by several of Halsey's descendents and a crowd of people, both Black and White.

"We must find the vestiges of systemic racism that are still happening today and that are still going on today," Barber said. "And we must call them out in Joshua's name. I'm here to tell you that what killed Joshua is still alive today."

Gwendolyn Alexis, a great granddaughter of Halsey's, teaches African American history, including the Wilmington massacre, but she had no idea she was connected to one of its victims.

"And when I found out that my great grandfather was killed, one of the people killed, it took my breath away," Alexis told CNN. "Because not only did I find family, I found history," and it made it much more real, she said.

Though this has been painful, it's also an opportunity for change, Halsey's descendents said.

"So we have to tell the the truth, talk about it and then find ways to deal with this," she said. "So this sort of thing doesn't happen again."