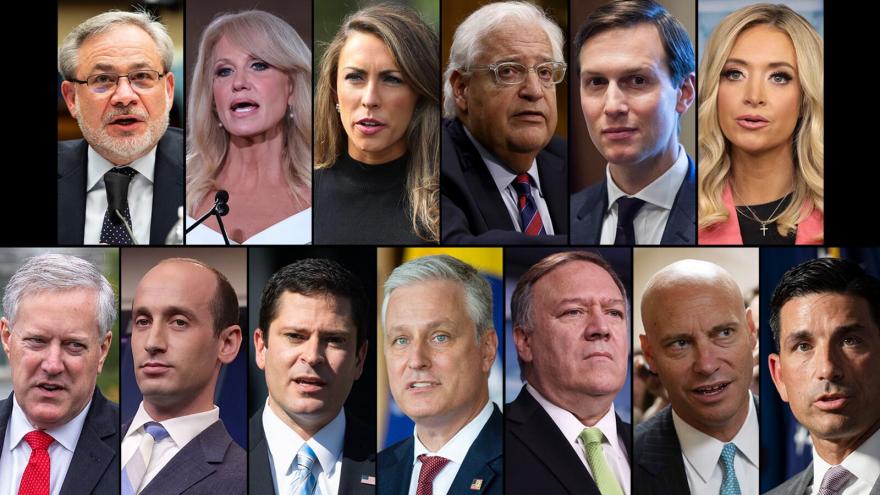 Thirteen senior Trump administration officials violated the Hatch Act, according to a report from the US Office of Special Counsel that was released on Tuesday.

(CNN) -- Thirteen senior Trump administration officials violated the Hatch Act, according to a report from the US Office of Special Counsel that was released on Tuesday.

Eleven of those senior Trump officials allegedly violated the Hatch Act by "campaigning on behalf of President Trump's reelection" during 18 official interviews or media appearances, and two of them committed violations related to 2020 Republican National Convention, the report said. The agency, which is charged with investigating Hatch Act violations, also found that some Trump administration officials "intentionally ignored the law's requirements and tacitly or expressly approved of senior administration officials violating the law."

The agency said it began investigating the officials after many complaints were submitted during and after the convention.

Former Secretary of State Mike Pompeo was found in violation of the Hatch Act when he addressed the 2020 Republican convention in a pre-recorded video, even after charging employees to "not improperly engage the Department of State in the political process," a move where he used "his official authority while giving that speech to promote President (Donald) Trump's candidacy," according to the report.

"Secretary Pompeo's approval of the change to State Department policy is a similar manipulation of government business to benefit a particular candidate," the report also said.

CNN reached out to Pompeo, Miller and other former senior administration officials for comment on Tuesday.

A source close to Short called the violations "a publicity stunt," adding: "Neither Marc nor OVP counsel had prior notice of these alleged OSC findings."

Though Farah told CNN that "live television or press briefings, when you're asked off the cuff questions, make it challenging," she said Hatch Act violations are inexcusable.

"We all need to hold ourselves to the highest standards (of) political impartiality when working for the American taxpayer," she said.

The report comes after a number of Trump administration officials were cited for allegedly violating the Hatch Act while Trump was in office but did not receive consequences.

CNN previously reported that a source familiar with the situation said Trump asked Pompeo to speak, and he considered it a high honor to have been asked. The speech was cleared through Pompeo's personal lawyers, State Department and White House lawyers, and RNC lawyers, the source said at the time. They called it "completely lawful and completely appropriate."

Former Acting Homeland Security Secretary Chad Wolf's violation stemmed from a naturalization ceremony where he issued an oath to five people and aired during the RNC. He previously said he was unaware footage of the ceremony would be aired during the convention and the Office of Special Counsel also said in the report he told them he had no knowledge that it would be played at the convention.

As President, Trump turned a blind eye before to potential violations of the Hatch Act, which limits the political activities of federal employees while on duty. Conway remained an adviser to the President despite the Office of Special Counsel recommending her removal for violating the act on several occasions.

While the President and vice president are exempt from the Hatch Act, a federal law that generally forbids the use of government property for political activities -- some previous officeholders have sought to limit political activity in the White House, for instance, by holding political events elsewhere or in the residential spaces of the presidential mansion.