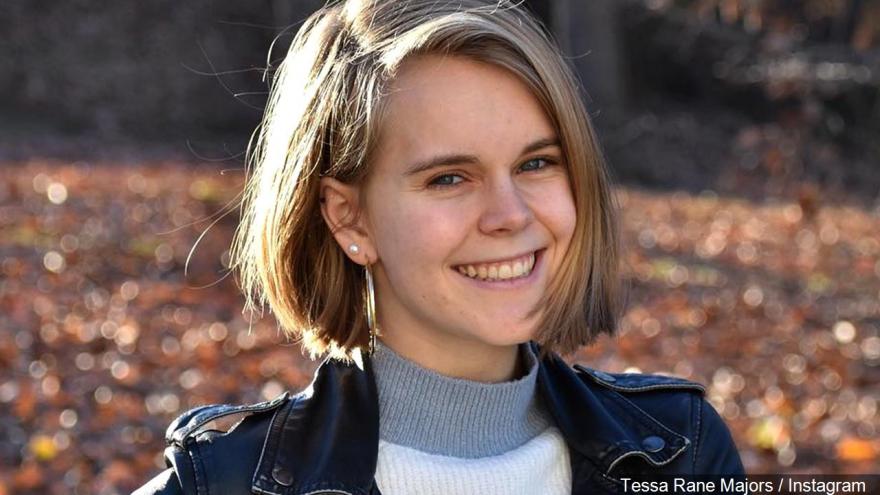 (CNN) -- The 13-year-old arrested in connection with the fatal stabbing of Barnard College freshman Tessa Majors will make a court appearance on Tuesday.

The teen will appear for a probable cause hearing, according to online court records. He was last in court on Friday for a pre-petition hearing and was "remanded to the Administration for Children's Services for secure detention," according to a statement from the New York City Law Department.

Majors, 18, was walking through Morningside Park, near the school's campus, on December 11 when police believe she was attacked by between one and three assailants, according to New York Police Department Chief of Patrol Services Rodney Harrison.

The New York City Medical Examiner ruled her death a homicide Monday, caused by stab wounds to her torso, according to Aja Worthy-Davis, a spokesperson for the office.

The 13-year-old was found with a knife and admitted being involved in the attempted robbery and stabbing, a law enforcement source familiar with the investigation told CNN Friday.

Police recommend charges of second-degree murder, first-degree robbery and criminal possession of a weapon against the teen, the source said. Prosecutors will decide the charges and whether he will be prosecuted as an adult.

Teen admitted to being part of the robbery

The 13-year-old was observed by police Thursday in the lobby of a building near the Manhattan neighborhood where the stabbing occurred one day earlier, according to a law enforcement source familiar with the investigation. He was wearing clothes matching the description given for the suspect in the Barnard student's killing. He was picked up on suspicion of criminal trespass.

The day that Majors was killed, the 13-year-old suspect in custody and two friends were at Morningside Park to rob people, NYPD Det. Vincent Signoretti testified at Friday's hearing, according to the New York Times.

The trio initially followed a man but targeted Majors instead, Signoretti said, according to the Times.

The detective testified that the boy said he watched as his two friends grabbed Majors and put her in a chokehold before taking items from her pockets,the New York Times reported. One of them slashed her with a knife shortly before 7 p.m., causing feathers from her coat to fall out, the Times said Signoretti told the court.

After the attack, she stumbled up a flight of stairs to street level before collapsing at a security booth near campus, according to Harrison. A school security officer called 911.

CNN has sought comment from the police and the District Attorney's office.

The boy's Legal Aid Society lawyer, Hannah Kaplan, told the court police had no evidence outside her client's statement. He had no criminal history, she said.

"There is no allegation my client touched the complainant in this case," she told the court. "He was merely present when this took place."

A second person was in custody in connection with the incident but has since been released, according to a law enforcement source with knowledge of the investigation. Police have not ruled out any involvement he may have had in the crime and are still searching for evidence in the case.

Authorities are searching for a third person who may have been involved.

"We lost a very special, very talented and very well-loved young woman," Majors' family said Friday in a statement. "Tess shone brightly in this world and our hearts will never be the same."

Majors was from Charlottesville, Virginia, where she previously attended a boarding school.

"Tess was a shining light in our community, a good friend, respected classmate, trusted teammate, and creative and passionate musician," said David Lourie, head of St. Anne's-Belfield School, where counselors were provided for students and alumni.

"Her death is an immeasurable loss, and we mourn alongside the Majors family and all who knew and loved Tess."

Lydia Pickering lived two houses down from Majors when they were kids, she told CNN. She saw Majors like an older sister.

"I can't even begin to explain the impact she had on me," Pickering said. "She brought joy wherever she went. She had a personality no one could ever copy, she was really just special."

She was committed to music and well known on the local scene, said Jeyon Falsini, assistant manager of The Southern Café and Music Hall, one of the venues where she performed. Classmate Lexi Phelan said Majors was "excited about life and deeply devoted to her music."

The NYPD increased patrols in and around the park and the nearby schools, including Barnard.

"The idea that a college freshman at Barnard was murdered in cold blood is absolutely not only painful to me as a parent, it's terrifying to think that that could happen anywhere," New York Mayor Bill de Blasio said at the news conference.

"It's unbelievable to me that that could happen here, next to one of our great college campuses," he added. "It's an unacceptable reality."

The city has offered Barnard College any help it needs, and it's sending mental health professionals to help students deal with the news, de Blasio said.

Barnard College is an all-women's school in Manhattan with more than 2,600 students. The school's campus stretches from West 116th Street to West 120th Street off Broadway in the Morningside Heights neighborhood of New York City.

"This is an unthinkable tragedy that has shaken us to our core. Please know that we are all grieving together and I am thinking of you as we process this awful news as a community," Barnard College President Sian Leah Beilock said, adding that Barnard's public safety department provides a 24-hour escort service for students.