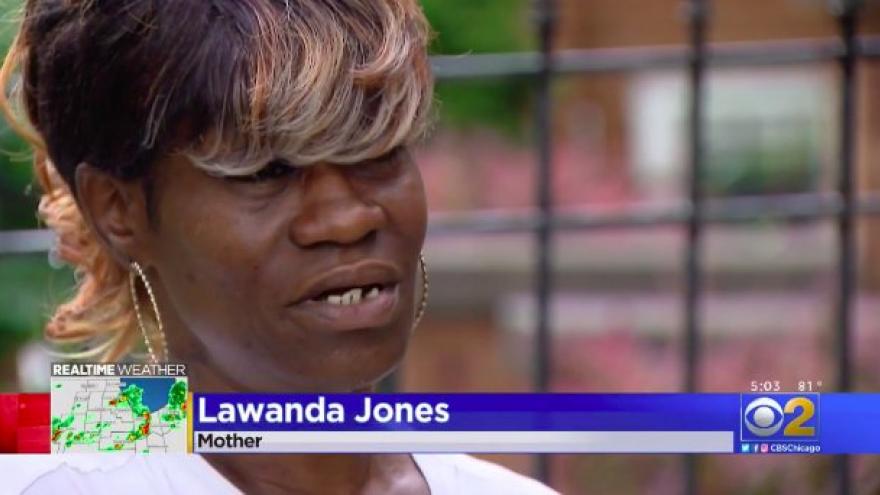 Chicago, IL (WBBM) -- A total of 102 people were shot in Chicago over the Father’s Day weekend, between Friday evening and 5 a.m. Monday. Thirteen of those people were killed, including at least five children.

As CBS 2’s Chris Tye reported, one of those children was Amaria Jones, 13, who was in the middle of showing her mom a dance move at their West Side home when a gunman – still on the loose – ended a life loaded with promise.

“She was showing me this dance called TikTok,” said Amaria’s mother, Lawanda Jones.

The 13-year-old had dreams of becoming an attorney. But those dreams were dashed when the bullet pierced the window of the family’s home in the 1000 block of North Leclaire Avenue in the South Austin community, went right through the family television, and struck Amaria in the neck.

“I turned around and I was looking for her and she was on the ground reaching out like this, holding her neck,” Lawanda Jones said. “I was like, what?! What?! What?!”

“The last thought that I have of my baby is her reaching out with blood gushing out her neck,” she continued.

Lawanda Jones said she joined a club this weekend to which she never wanted membership.

“No one want to be a member of burying their child,” she said. “It’s supposed to be is — them burying us, not us burying them.”

It was 8:36 p.m. Saturday when the shooting happened. Two teenage boys were sitting on the porch when another man saw a red laser light pointed at him and heard multiple gunshots, police said.

The boys, ages 15 and 16 who were outside, and Amaria was inside the home when all were shot, police said.

Amaria was shot in the right side of the neck and was taken to Stroger Hospital of Cook County in critical condition, police said. She died at the hospital about half an hour later.

The bullet went through a “Chicago Lives Matter” sign hung and still hangs.

“They talk about the police killing — killing our citizens. They’re killing each other off,” Lawanda Jones said. “Our kids are not safe no more. Period. You can’t sit on your porch. You can’t even be in your own house. You’ll get killed.”

Lawanda Jones was the recipient of a call from Mayor Lori Lightfoot. She was also the author of a message to the other parents whose children lost their lives on this deadly Father’s Day weekend in Chicago.

“To the other parents whose kids got shot — my heart goes out to them too, because don’t nobody know what it’s like unless you are in these shoes, to lose a child,” Lawanda Jones said. “You might sympathize with us, but you ain’t going to feel the pain until it actually happens.”

Lawanda Jones also lost a nephew to gun violence one year ago, just three blocks from where her daughter was shot and killed this weekend.

She is calling on the person who shot and killed her daughter this weekend to turn themselves in. She said the idea of burying her own daughter is often just too difficult to bear.

Meanwhile, a vigil was held late Monday to remember Amaria’s life, as well as the life of Mekhi James, a 3-year-old boy who was shot in the back and killed as he rode in the back seat of his stepfather’s car, only a couple hours earlier and only a matter of blocks away in the 600 block of North Central Avenue.