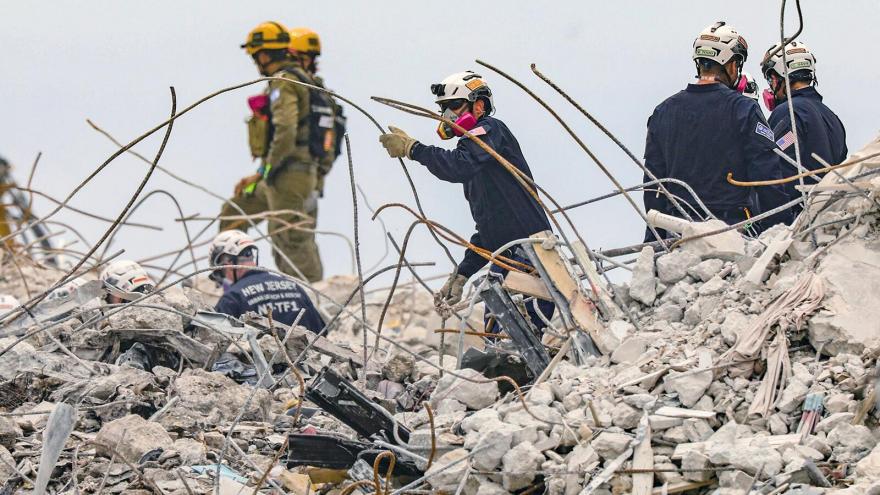 Of those, 53 victims have been identified, she said.

Currently, 61 people are potentially unaccounted for, the mayor added.

Experts from the National Institute of Standards and Technology (NIST), including the agency's physical measurement laboratory, have "made significant progress in tagging and transporting" more than 200 pieces of forensic evidence in the search for clues into the cause of the collapse, according to Levine Cava.

The mayor said 60 trucks a day have hauled away 13 million pounds of concrete and debris from the site.

Eight additional victims were identified by Miami-Dade Police on Friday.

Police identified them as Vishai Patel, 42, and Bhavna Patel, 36, who were recovered from the rubble on Tuesday.

And Maria Teresa Rovirosa, 58; Luis Lopez Moreira III, 3; Luis Pettengill, 36; Deborah Berezdivin, 21; and Juan Alberto Mora, 80 -- all whose remains were recovered on Wednesday, according to police. Sophia Lopez Moreira, 36, was found on Thursday.

"The magnitude of this tragedy is growing each and every day," Levine Cava said. "It's an aching hole in the center of this close-knit family."

Although authorities at the Surfside condo collapse site have lost hope of finding survivors, they remain committed to recovering the remains of those still unaccounted for and reuniting them with their families, Surfside Mayor Charles Burkett said.

The pile of debris, once four or five stories high, has been reduced to ground level or below in some areas, Burkett said. The crew has been "identifying, labeling, categorizing and storing" all valuable items and keepsakes found at the site, he said.

"We owe a duty to the families," he said. "This undertaking is very very important work."

Fire officials met with families Thursday, when Burkett said a representative assured them the department "will not stop working until they've gotten to the bottom of the pile and recovered every single one of the family's missing loved ones."

"The speaker further said that I can assure you, we are not stopping. And your missing children are coming back to your family," Burkett added.

Friday was the 16th day since the Champlain Towers South condo building came down in the middle of the night, setting off one of the deadliest building collapses in US history, not including acts of terror or fires.

For nearly two weeks, officials had labeled the effort a rescue mission but transitioned to a recovery operation at midnight Wednesday, after determining "the viability of life in the rubble" was low, Miami-Dade County Fire Chief Alan Cominsky said.

And though crews are still searching aggressively, space is being made to allow the community to grieve.

Levine Cava said some of the families who lost loved ones were brought to the site Thursday at their request.

"Every victim we recover is handled with extreme care and compassion," Levine Cava said. "We have a tent designated on-site, and when a Jewish body is discovered, a prayer is performed and specific protocols are followed to honor both the faith traditions and the integrity of the investigation."

Victims will have help piecing life back together, congresswoman says

Dozens of families have lost loved ones or lost everything they had as they escaped the collapse, and US Congresswoman Debbie Wasserman Schultz promised federal assistance Thursday to help both "piece back shards of their lives that have been blown apart."

"When the cameras turn off and when the hard work begins to make sure that the recovery -- for not only those that have been lost, but the families who have lost everything -- we [will] make sure that pathway is as smooth as possible," Wasserman Schultz said during a news conference.

Wasserman Schultz said she is working with multiple agencies. including FEMA, NIST, and OSHA to address the long-term needs of families.

The Democratic congresswoman said she will be "working at the very most personal level with my constituents, to see how we can help them just to get through the overwhelming bureaucracy that this tremendous tragedy has represented."

Wasserman Schultz said "no one budgets" for such "an unimaginable, unprecedented tragedy like this."

"No one plans for the kind of response that is necessary and so making sure that we stay in this for the long haul is going to be absolutely essential," she added.

Some needs can be met by adding to the federal budget and others may require an emergency supplemental appropriations bill, she said.

Concrete samples from sister building to be investigated

Another priority for officials is determining what caused the structure to come down and whether it can happen to other buildings in the area.

Samples of the concrete the Champlain Towers North building have been taken to determine if there is potential salt contamination, Burkett said Thursday.

Salt content in the structure would compromise the building, he said.

The sister building to the collapsed Champlain Towers South, is "substantially the same as the building that came down: the same construction, the same developer, the same name, probably the same materials," he said.

Allyn Kilsheimer, a structural engineer hired by the city of Surfside to investigate the collapse took CNN on a tour of Champlain Tours North on Friday.

Kilsheimer said his team has been at the north tower for two days, using ground-penetrating radar (GPR) to check the thickness of the concrete and collecting samples.

Kilsheimer said he has not seen anything that concerns him.

"The thing that I'm looking for is anything that would warn me ... to get people out of the building," he said. "I've not seen anything like that at this point in time."

Other buildings in the area will soon receive letters from the mayor advising them to take the necessary steps to assure residents their buildings are safe, according to a copy of the letter obtained by CNN.

Regardless of the age of the building, the city is recommending the hiring of an engineer to review structural drawings and review basements, as well as a geotechnical engineer to examine the foundation.