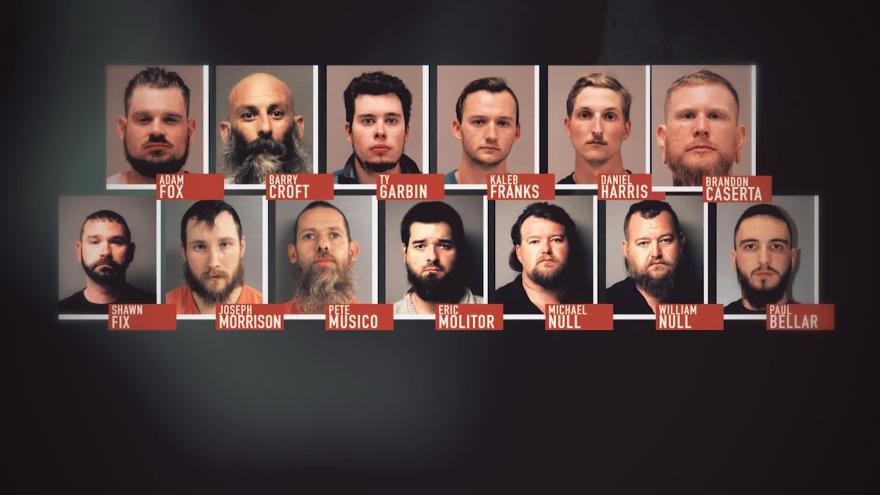 A 14th person has been charged in the alleged domestic terrorism plot to kidnap Gov. Gretchen Whitmer, according to the Michigan attorney general's office.

(CNN) -- A 14th person has been charged in the alleged domestic terrorism plot to kidnap Gov. Gretchen Whitmer, according to the Michigan attorney general's office.

Brian Higgins, 51, of Wisconsin Dells, Wisconsin, has been charged with material support of an act of terrorism for his "alleged participation in a plan of domestic terrorism that included storming the Michigan Capitol building and harming government officials," Attorney General Dana Nessel's office said in a release.

Seven other people, all associated with the extremist group Wolverine Watchmen, were charged by the state of Michigan last week, and the federal government has charged an additional six people.

"While the political rhetoric in our nation may at times be divisive, I am encouraged by the united front our law enforcement community has displayed in response to this indescribable act of terror," Nessel said.

"These were very credible and very serious threats to our elected officials and the public in general, and the swift actions taken by state and federal authorities this past week are nothing short of heroic," she said.

Higgins has been charged with "material support or resources to a terrorist organization," according to the arrest warrant.

Higgins is thought to have "provided material support and resources in the furtherance of terrorist acts," according to the affidavit.

Higgins provided his night-vision goggles for surveillance of Whitmer's vacation home and used a dash camera in his vehicle to record the surveillance "to aid in kidnapping plans," the affidavit said.

Those charged in Michigan last week are suspected of attempting to identify the addresses of law enforcement officers "in order to target them," Nessel said after those arrests.

They "made threats of violence intended to instigate a civil war, and engaged in planning and training for an operation to attack the capitol building of Michigan and to kidnap government officials, including the governor of Michigan," Nessel said.

CNN is trying to determine whether Higgins has an attorney.

Higgins and seven other individuals were charged with a total of 20 state felony charges filed by Nessel.

If convicted, Higgins faces up to 20 years in jail for the act of terrorism charge.

Higgins was arrested in Wisconsin on Thursday and will be extradited to Michigan, according to the news release.

No court dates have been scheduled yet, according to the release.