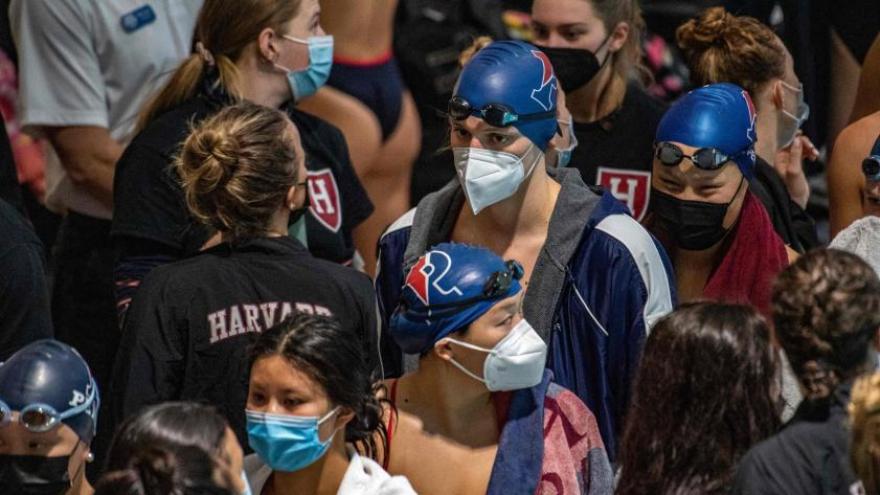 (CNN) -- A letter written on behalf of 16 members of the University of Pennsylvania's swim team was sent to the university and the Ivy League on Thursday asking that they not pursue legal action to challenge the NCAA's new transgender athlete participation policies.

The letter was written by Nancy Hogshead-Makar, CEO of Champion Women and an Olympic champion in swimming, on behalf of 16 members of swim team.

Thomas, a transgender woman who swims for the Quakers women's swim team, won the women's 100- and 200-yard freestyle at Harvard last month and set record times on the women's team this season. She had previously competed on the men's swimming team at Penn and underwent two years of hormone therapy.

In the letter obtained by CNN, the swim team members say they feel that she holds an "unfair advantage over competition."

"We fully support Lia Thomas in her decision to affirm her gender identity and to transition from a man to a woman. Lia has every right to live her life authentically," the letter says. "However, we also recognize that when it comes to sports competition, that the biology of sex is a separate issue from someone's gender identity. Biologically, Lia holds an unfair advantage over competition in the women's category, as evidenced by her rankings that have bounced from #462 as a male to #1 as a female."

The identities of the teammates were not revealed.

The new NCAA policy states that transgender athletes will now have mandatory testosterone testing, starting with the 2022-23 academic year -- at the beginning of their season and again six months later, according to rules approved this week by the NCAA Board of Governors. Additionally, they will need to be tested four weeks before championship selections.

The NCAA previously required that transgender women have testosterone suppression treatment for a year before competing on a women's team.

Penn Athletics said it will work with the NCAA regarding Thomas' participation in the 2022 swimming and diving championship in March.

The Ivy league said it does not "publicly respond to letters submitted to our office."

CNN contacted the school for comment but did not immediately hear back before this story was published.

The letter comes after multiple members of the UPenn swim and diving team voiced their support of Thomas earlier this week.

"We want to express our full support for Lia in her transition," the athletes said via ESPN. "We value her as a person, teammate, and friend. The sentiments put forward by an anonymous member of our team are not representative of the feelings, values, and opinions of the entire Penn team, composed of 39 women with diverse backgrounds."

UPenn is next scheduled to compete February 16-19 at the Ivy League Championships at Harvard. Thomas has qualified for the NCAA championships, which are scheduled for March 16-19 in Atlanta.