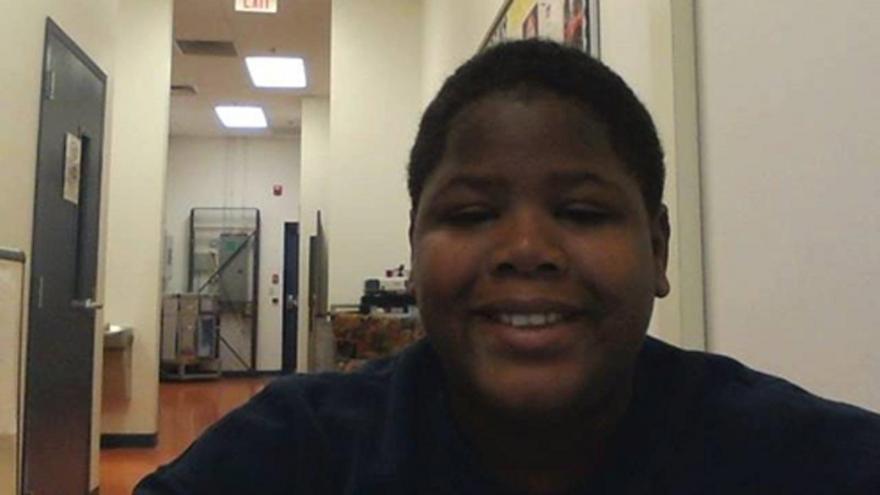 (CNN) -- A 16-year-old Michigan boy went into cardiac arrest and died after several staff members of the residential treatment facility he stayed at restrained him, according to a lawsuit filed Monday.

Cornelius Fredericks was staying at Lakeside Academy, a residential treatment facility in Kalamazoo, Michigan, intended for young adults ages 12 to 18 placed through the foster care system or by their parents to receive behavioral health services.

On April 29, Fredericks allegedly threw part of a sandwich at another resident and Lakeside staff used an "improper restraint" on him, which resulted in him going into cardiac arrest, according to the lawsuit. Two days later on May 1, Fredericks died, the lawsuit states.

After Fredericks's death, Michigan Department of Health and Human Services (MDHHS) launched an investigation into the facility. In the full report provided to CNN, officials said that staff initiated restraint that was "significantly disproportionate" to Fredericks's behavior, and the facility did not followits own restraint policy.

MDHHS has since terminated all contracts with Lakeside and has begun the legal process to revoke its license, according to a press release from the agency. At the time of the investigation, MDHHS found "10 licensing violations, including a failure to follow rules related to resident restraint and discipline," the press release said.

In a statement to CNN, Sequel Youth & Family Services, the owner of Lakeside Academy, said it is "making the necessary changes to ensure something like this never happens again."

"We are deeply saddened by the tragic loss of Cornelius and acted quickly to terminate all staff involved. Additionally, we have removed the former executive director of Lakeside from the organization," the statement reads.

"We have been in regular contact with law enforcement and state officials to help ensure justice is served and have accelerated the work that was already underway across our organization to move to a restraint-free model of care," the statement continues. "We take our obligation to meet the significant behavioral health needs of all our students incredibly seriously and remain focused on our mission of providing the absolute best care and treatment possible for our clients."

The Kalamazoo County Office of the Prosecuting Attorney confirmed it is reviewing the incident and will decide on the appropriate charges.

"It's sad it took the death of this young boy in order to bring this about," Marko said. "It shouldn't have come this far. Cornelius shouldn't have had to die for people to wake up."

When asked for comment about Marko's claims, the company referred CNN to its original statement, which did not address those accusations.

According to the report from MDHHS, the incident started when Fredericks threw part of his sandwich at a nearby resident.

Fredericks was restrained for approximately 12 minutes, according to the report. About 10 minutes in, the Director of Nursing came in and observed the restraints, the report continues, and about 12 minutes after the staff members released Fredericks, the nurse called 911.

Fredericks was then transferred to Bronson Methodist Hospital where he later died, the report says.

When it is used, Sequel Youth & Family Services said, it is intended as a minimal level of intervention, it isnot meant to be used as "a means of coercion, discipline, convenience, or retaliation by staff."

After Fredericks's death, all 125 residents at the facility were "removed and placed in other appropriate settings," according to a press release from MDHHS.

The agency announced a ban on the use of physical restraints in all its licensed and contracted child-caring facilities, and will provide technical assistance to all licensed providers on alternative methods to restraint before the policy takes effect. It also asked three national organizations with expertise in child welfare to do an independent assessment of the department's "licensing and contract oversight functions."

"MDHHS continues to mourn the loss of this young man's life, which came needlessly to an end at the hands of those meant to care for him," said JooYeun Chang, executive director of the MDHHS Children's Services Agency.

"We are committed to protecting children and will not accept the completely unnecessary death of a youth who is deprived of the opportunity to grow up, complete his education, begin a career, and start a family. Not only is it critical that we hold the agency accountable -- we must also improve our policies and practices so that a tragedy like this never happens again."

Lakeside may appeal the recommendation to revoke its license, MDHHS said.

Michigan Gov. Gretchen Whitmer also commented on the case, saying her office was taking steps to prevent this from happening again.

"Protecting our most vulnerable is a top priority of my administration," Whitmer said, "and the senseless death of a youth at Lakeside for Children in Kalamazoo is intolerable and heartbreaking."