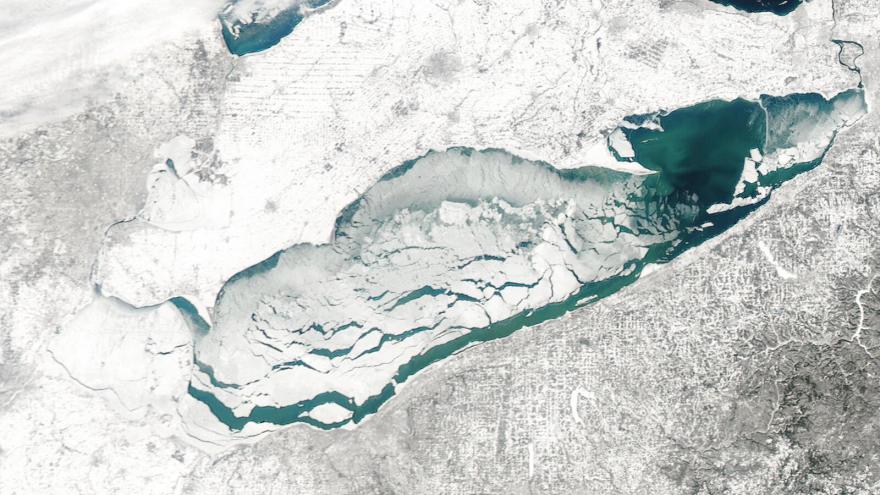 A satellite image from the US National Oceanic and Atmospheric Administration shows the crack in the ice on Lake Erie Sunday.

(CNN) -- Eighteen people were rescued from an ice floe that separated from land near Catawba Island in Lake Erie, the US Coast Guard said Sunday.

A sheet of floating ice broke away while the individuals were snowmobiling, according to the Coast Guard.

Authorities used a Coast Guard Station Marblehead airboat and an Air Station Detroit helicopter to rescue the stranded group, the Coast Guard said earlier in a tweet. A "good Samaritan" with an airboat also assisted with the operation.

"The helicopter lowered its rescue swimmer and began hoisting operations while Station Marblehead's airboat got underway," the Coast Guard said in a news release.

No one needed medical attention, according to the news release.

"There's no such thing as safe ice, but people can mitigate their risks," said Lt. j.g. Jeremiah Schiessel with the Coast Guard Sector Detroit. "Always be sure to tell someone where you're going and when you expect to be back. Great Lakes ice is unpredictable, and conditions can change fast."

The National Weather Service Cleveland had warned earlier on Twitter that increased wind could cause ice to break away from the lake's shore.

"You are urged to stay off the ice on Lake Erie as there is the possibility that the ice will drift away from shore," the tweet said. "Dangerous ice conditions could develop causing people to become trapped on the ice."