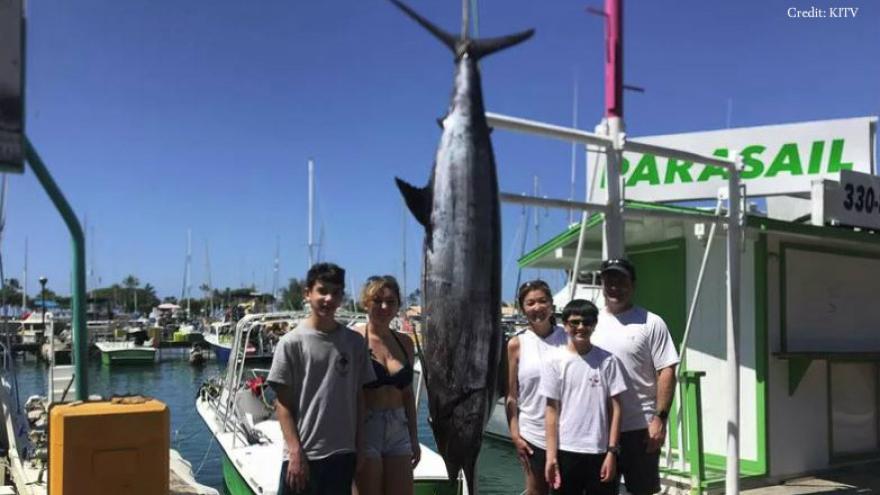 18-year old Bridgette Collins and her family chose to celebrate her father’s 50th birthday in Hawaii. For his special day, they decided to go fishing.

They left in the morning on an Island Charters Sport fishing boat, and after several hours of waiting for something to bite their bait, finally heard the line snap.

"The fish jumped out of the water and we pointed it out. It was pretty far out, a little further than I anticipated." Explained Chris Collins, Bridgette’s father.

He said Bridgette didn’t hesitate to jump into action while they cheered her on.

"My dad brought the reel over and I was just reeling it in for an hour and a half. It was really tough. My arm was falling off." Said Bridgette. Eventually, three people were able to hoist the beast on board, finally revealing their hard-earned prize, a nearly 450-pound Marlin.

"I thought it was awesome. That's the biggest fish I've ever seen in my life." Explained Bridgette.

For the Collins, it was the first and last catch of the day.

"We had to come in because of the size of the fish. We were supposed to be out there till 4:00 this afternoon and they said we don't have enough ice. We have to bring it in." said Bridgette’s mother, Betty Collins.

Local fishermen say catching a large Marlin is more common than you think, but for this family it was a once in a lifetime experience.