19 sharks have been sighted at beaches in Long Island, county executive says 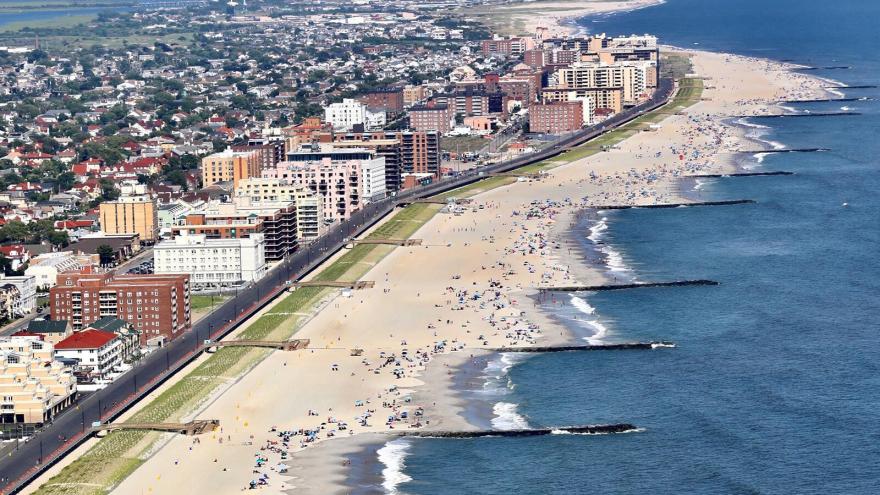 There have been at least 19 shark sightings on Long Island's Nassau County in New York this season. This image shows an aerial view of the ocean and shoreline at Long Beach, New York on July 27, 2020.

Curran called the number "a significant increase." No attacks have resulted from the increased sightings and the county hasn't had more than 12 recorded shark attacks since 1837, according to Nassau County Police Commissioner Patrick Ryder.

Beaches in Nassau County's town of Hempstead have been closed or restricted multiple times this summer due to shark sightings. The latest shark-related sightings were on Thursday, after which the town announced in a tweet that swimming was restricted to "knee-deep" only.

Nickerson Beach, part of the Nassau County-operated beaches, had its latest shark-related closing on Tuesday, when a shark was spotted 40 yards offshore by lifeguards and beachgoers, Curran tweeted earlier this week. The beach restricted swimming to "waist deep" due to another shark sighting two days earlier, Curran tweeted at the time.

Curran said sharks, and the schools of fish that they chase, are attracted northward by streams of warm water that flow from the subtropics and tropics. The water around Long Island has gotten a lot cleaner recently, potentially contributing to the increase in shark sightings, Curran said.

Paul Sieswerda, executive director of New York-area advocacy group Gotham Whale, said at a press conference last month that the organization has received "more than double" the number of shark sightings this season than in past years.

However, Sieswerda said that number includes sharks that "normally occur" in the New York area and not just bull sharks or great white sharks.

Nassau County announced in July they would be enhancing helicopter patrols and marine ocean patrols over the shoreline to help alert beachgoers of the presence of sharks. If a shark is spotted too close to shore or displaying aggressive behavior, pilots will immediately get information to all beaches, even if they are not technically in Nassau County, Curran said at the time.