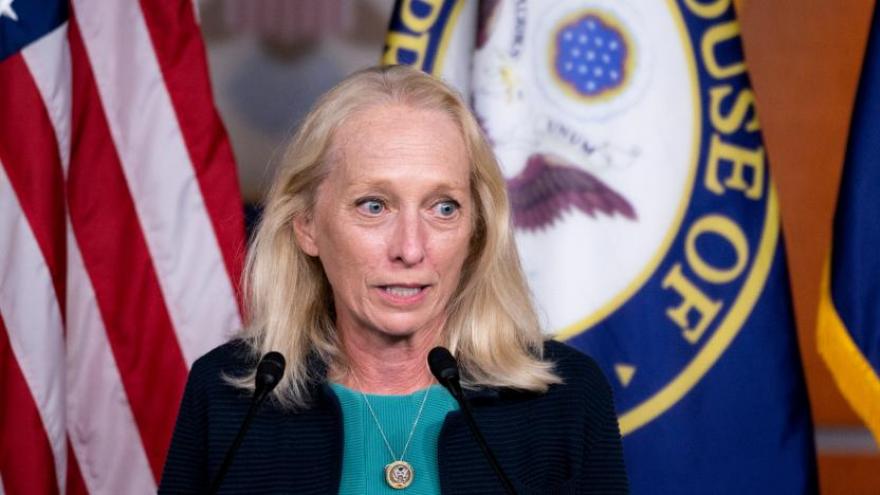 Rep. Mary Gay Scanlon, a Pennsylvania Democrat, speaks during the news conference introducing the Protecting Our Democracy Act in the Capitol on Tuesday, Sept. 21.

(CNN) -- Federal prosecutors have charged a Delaware man with carjacking Democratic Rep. Mary Gay Scanlon of Pennsylvania and using a firearm during a crime of violence, the Justice Department announced Thursday.

CNN is attempting to locate attorney information for Brown. Scanlon was physically unharmed during the incident.

According to the federal criminal complaint, Brown and other unidentified accomplices were in Philadelphia on Wednesday. At least one of them saw and approached Scanlon, identified as "M.S." in court records, pointed a gun at her and demanded her car keys, the complaint said.

The group then drove to Delaware, where the vehicle was later located, and Brown was arrested. During an interview after his arrest, Brown "provided a written apology to the victim, indicating that he was sorry for stealing the car and for pointing a gun at her," according to the criminal complaint.

"My family car was stolen from me at gunpoint in broad daylight, in a busy public park. Obviously, it was a scary thing to have happen, but I'm extremely grateful that no one was hurt," Scanlon said Thursday during a news conference in her first known public comments since the incident.

Authorities have not said whether Scanlon was targeted as a member of Congress, but an FBI official indicated that the victim was a "total stranger" to the suspects in the Justice Department statement. Court records do not indicate Brown is being charged with assaulting a federal official.

"The investigation into this incident is in its very initial stages, and we are continuing to investigate and evaluate charging decisions," said US Attorney Jennifer Arbittier Williams.

Car jackings in Philadelphia have more than doubled in the last two years, Philadelphia Police Department chief inspector Frank Vanore said at a news conference Thursday. "The increase is pretty profound," he said, adding that of the 700 cars that have been stolen this year, more than 500 were reportedly taken by gun-wielding carjackers.

Brown appeared before a magistrate judge on Thursday, according to prosecutors, and remains in federal custody.

Authorities also took four other suspects into custody in connection with the incident, who have been charged with receiving stolen property, Senior Cpl. Jason Hatchell of the Delaware State Police told CNN Wednesday night.

Scanlon has served in the House since 2018. Her district includes part of Philadelphia and its suburbs. She sits on the House Judiciary Committee as well as the House Rules and Administration committees.

Asked by CNN on Thursday if she plans to reach out to her Republican Senate colleagues to share her experience and ask for their support for long-languishing gun control legislation, Scanlon said, "I'd be happy to do so."

"There's a lot that the American public broadly agree upon. And you know, maybe the Senate hasn't gotten the message yet," Scanlon said of gun control bills, some of which have already passed the House but do not have the 60 votes needed to pass in the Senate.