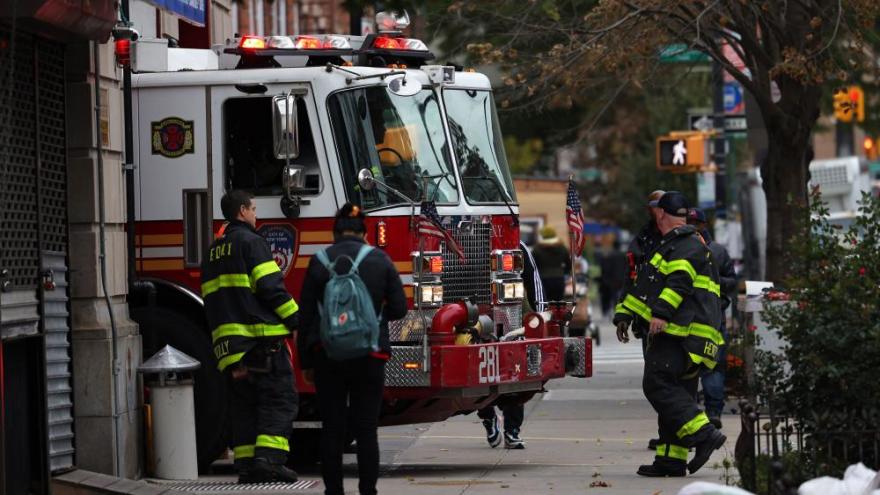 Members of the New York City fire and police departments and other city workers had until Friday evening to show proof they have received at least one dose of the Covid-19 vaccine or be placed on unpaid leave. Firefighters are shown here as their fire engine enters the FDNY Engine 281/Ladder 147 station on October 29, 2021 in the Flatbush neighborhood of Brooklyn borough in New York City.

(CNN) -- Hundreds of New York City firefighters called in sick Monday morning as the Covid-19 vaccine mandate for municipal employees went into effect, bringing the total number of sickouts in the fire department to 2,300, FDNY Commissioner Daniel A. Nigro said at a news conference.

Nigro said many people calling in sick were protesting the vaccine mandate.

"Once the members come to their senses and stop using medical leave improperly, they can help out not only the citizens of the city but their brothers and sisters who are staffing these units," Nigro said.

With many public safety unions pushing back against the mandate, city officials had worried about employee shortages in the fire and police departments.

Speaking at a news conference, Mayor Bill de Blasio said approximately 9,000 city employees are on leave without pay as of Monday, out of a workforce of 378,000, for not complying with vaccine mandate regulations. He said public safety has not been compromised.

De Blasio said people who are inappropriately using sick leave in the fire department or any other department are facing very serious consequences.

"When a city employee fakes it and puts other people's lives in danger, that's a serious thing and there are going to be consequences for that," he said.

There are 18 fire units out of service out of 350 total, Nigro said, adding no firehouses are closed. NYPD Commissioner Dermot Shea said 34 of 35,000 uniformed officers were on no-pay status on Monday, along with 40 of 17,000 civilian employees.

FDNY-Firefighters Association President Andrew Ansbro said he doesn't know how many firefighters would not be permitted to work Monday morning due to still being unvaccinated, stating the FDNY does not share those numbers with them.

Ansbro said the vaccine mandate is "causing an exodus" of firefighters from the department and the remaining firefighters are "going to have to work to the breaking point" to make up for the staffing shortages. Ansbro maintained their union is "not anti-vaccine, we are anti-mandate."

Ansbro said many firefighters who decided to get vaccinated over the weekend are taking sick days because of reactions to the Covid-19 vaccine.

"Everyone knows the vaccine causes mild flu-like symptoms regularly, so these members are not coming to work feeling those symptoms," Ansbro said.

Mayor says no service interruptions because of vaccine mandate

De Blasio said Monday the start of a Covid-19 vaccine mandate has not resulted in service interruptions for the city police, fire and sanitation departments, though a high number of city employees called in sick, citing health reasons.

De Blasio said Monday 91% of all municipal employees have been vaccinated with at least one dose of Covid-19 vaccine, including large percentages of first responders.

The NYPD has an 84% vaccination rate, up from 70% when the citywide vaccine mandate was announced October 20, de Blasio said.

NYPD Commissioner Dermot Shea said the department's vaccination percentage was 85%, with the vast majority of the remaining unvaccinated requesting accommodations for religious or medical reasons.

"Members of the police department responded to this (vaccine mandate), they came to work as they always do and there is literally no effect on service at this point," Shea said Monday.

The FDNY has a 77% vaccination rate, up from 58% when the mandate was announced. The city Department of Sanitation vaccination rate rose to 83% from 62%. Emergency Management Services went to 88% from 61%.

De Blasio said the mandate spurred people to get vaccinated.

He said 22,472 city employees have been vaccinated since October 20 and 3,564 people received at least one vaccine dose over the weekend after the 5:00 p.m. Friday deadline passed.

From Saturday night to Sunday night, at least 1,400 NYC employees received at least one dose, based on the data provided Sunday by the mayor's office.

Members of the fire and police departments and other city workers had until 5 p.m. Friday to show proof they have received at least one vaccine dose or be placed on unpaid leave. The same mandate has been in effect already for city health care and education workers.

With a number of public safety employees pushing back against the mandate, officials had scrambled to deal with potential staff shortages.

One source told CNN last week the Fire Department of New York was preparing for a 20% reduction in service starting Monday. The source who spoke to CNN said as many as a fifth of the city's fire companies could be closed as a result of unvaccinated staff shortages and added a fifth of the department's ambulances could go out of service.

It is a challenge familiar to other cities that have worked to enact vaccine mandates amid ongoing resistance from law enforcement officers and their unions.

FDNY-Fire Officers Association President Jim McCarthy said Monday morning "all we are asking for is extra time" regarding the city mandate, so their members can have more time to make decisions on whether to get the vaccine, to file any religious or medical exemptions, or potentially decide to retire.

McCarthy said the department's previous policy of testing unvaccinated FDNY members for Covid-19 was working and claimed the Covid-19 positivity rate for the department was less than one half of one percent.

A Staten Island judge denied a request by the city's largest police union Wednesday to block the vaccine mandate. The decision was a "violation of police officers' rights and would lead to fewer officers on the streets," said Patrick Lynch, head of the New York City Police Benevolent Association.

To avoid getting vaccinated, thousands of NYPD employees applied for a "reasonable accommodation" before the mandate went into effect, Shea told local station WNYW.

Anyone who goes to work Monday who is not vaccinated and does not have a pending reasonable accommodation request submitted by Wednesday will "be sent home without pay," Shea told the news station.

FDNY members protested the mandate outside De Blasio's official residence Thursday, sporting signs with phrases including "My Body My Choice" and "#Natural Immunity."

Hospitalizations have dropped in NYC

Covid-related hospitalizations are dropping sharply in New York City -- and the nation.

Data from NYC Health showed the seven-day average for Covid hospitalizations in the city was 23 on October 26, the last time figures were released, down from 77 on September 26 and 107 on August 26.

Nationally, there are 48,609 people hospitalized for Covid-19, according to the US Department of Health and Human Services, the lowest the metric has been since late July.

Ensemble forecasts from the US Centers for Disease Control and Prevention published Wednesday predict new Covid-19 hospitalizations and deaths will decrease over the next four weeks.

The newest hospitalizations forecast predicts there will be 1,600 to 7,400 new confirmed Covid-19 hospital admissions likely reported on November 19, 2021.