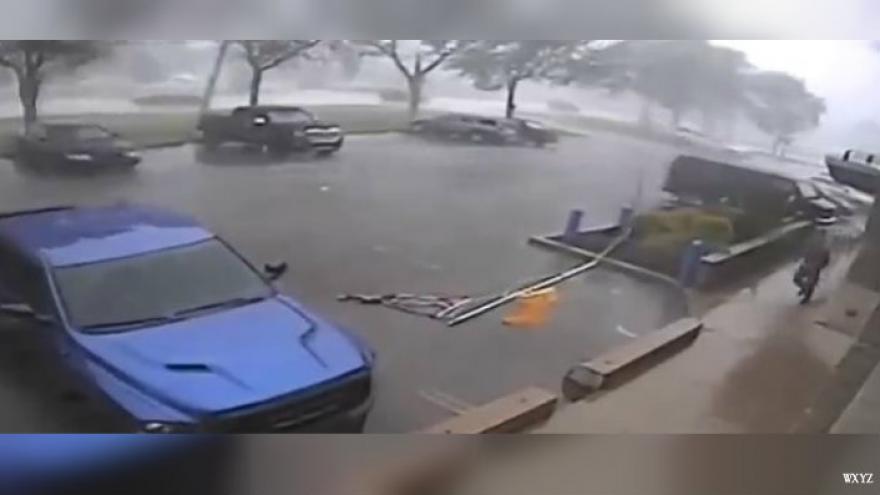 TAYLOR, Mich. (WXYZ) -- Two soldiers showed their true patriotism two weeks ago by protecting the American flag during a storm.

It happened at Top Gun in Taylor during July 26th’s severe weather, and it was caught on camera.

Sgt. Ferguson describes the moment when he and Sgt. Eric Barkhorn ran out into the storm with winds so strong it snapped the flagpole in half.

Barbour was hosting a Patriot Week, and that day the soldiers were in the store recruiting when the severe weather caught their attention.

Sgt. Ferguson said,“Everyone rushes to the door to, kind of, to see what was going on.”

“This is crazy, power flickered, we had an event going on, we are hoping we weren’t losing power,” explained Barbour.

Sgt. Barkhorn ran out first when the pole broke in half, bringing Old Glory down.

“I wasn’t going to leave the flag on the ground,” Sgt. Barkhorn said.

Sgt. Ferguson added,“It’s important not to let it hit the ground like that.”

They needed to move fast because of lightning, so a Top Gun employee ran out with a knife to cut the rope.

The soldiers brought it inside and folded the flag properly before handing it to Barbour.

Sgt. Ferguson said,“Everything that we stand for, our freedoms that we have, we carry it on our shoulders every day.”

Barbour said 15 seconds after the soldiers came in, a gust of wind came through so strong it caused at least $70,000 worth of damage on the roof and side of the building.

“Hail was really pounding on the roof,” he said. “The wall fell in, but nobody heard it because the other noise was so loud.”

Barbour put the video of the soldiers in action on Facebook, and within a few days it got more than 9,000 views

“They are not even deployed, and they are still back here taking risks,” he said about the soldiers.

Sgt. Barkhorn said, “Something we would do if nobody was watching anyways.”

The soldiers say the love they have for the red white and blue is worth fighting through a storm.

Sgt. Barkhorn added,“I hope that anybody else would do the same thing.”