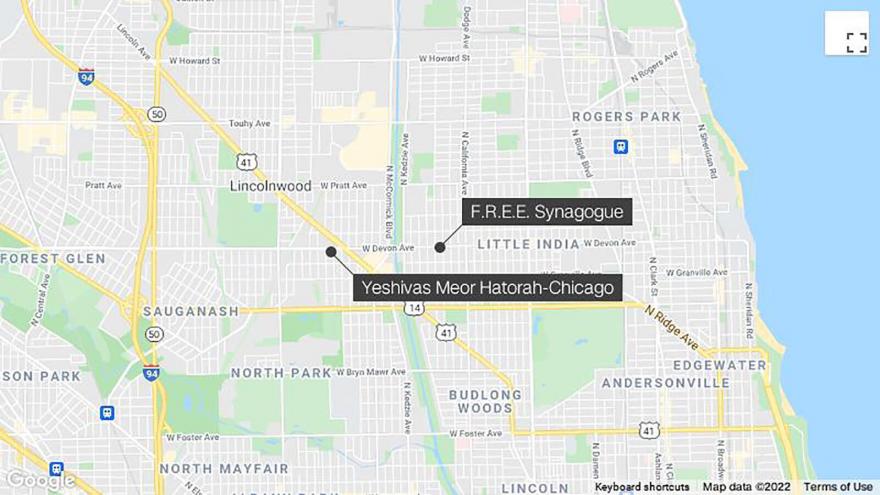 Two synagogues in Chicago were vandalized over the weekend and someone is in custody, officials said, as American Jewish communities remain on edge over anti-Semitic incidents, including last month's hostage-taking at a Texas synagogue.

(CNN) -- Two synagogues in Chicago were vandalized over the weekend and someone is in custody, officials said, as American Jewish communities remain on edge over anti-Semitic incidents, including last month's hostage-taking at a Texas synagogue.

A person of interest in the Chicago cases has been in custody since Sunday but had not been charged as of late Monday afternoon, a Chicago Police spokesperson told CNN.

"We were packing food at our food bank for Russian seniors and Holocaust survivors, and as we walk outside, we see a swastika on the building," Rabbi Levi Notik of the F.R.E.E. Synagogue told CNN.

A young man was "jumped" around the same time the swastika was noticed Sunday, Notik said. He sustained minor injuries.

Another synagogue less than 2 miles away also was vandalized over the weekend, according to a woman who answered the phone at Yeshivas Meor Hatorah-Chicago.

"There was some vandalism, and the police are investigating," she told CNN, declining to comment further.

"Unfortunately, we are seeing more and more of these incidents in the past couple of weeks," the American Jewish Committee's director for combatting anti-Semitism, Holly Huffnagle, told CNN's "New Day" on Tuesday.

"Even in January, there were neo-Nazis waving flags in Florida, there were synagogues defaced in Chicago," she said. "Right here in Washington, DC, where I'm based, there are Nazi swastikas on Union Station, there have been Jewish children spat on in New York and just a couple weeks ago the horrific hostage situation in Colleyville, Texas. This is part of a larger picture the last few years here in America."

This weekend was not the first time F.R.E.E. synagogue has been attacked, Notik said.

"This building that we're in now, actually, we got it after our prior synagogue was burned to the ... ground in 1993 due to anti-Semitism," Notik said.

"I want to thank law enforcement for doing an amazing job," he told CNN in reference to the weekend incident. "I mean, they were really quick and on scene, and they have someone in custody."

"We are going to stand strong," the rabbi added. "We'll get through this; we will overcome it together as a community, but we have to eradicate hate through love."

Attacks on Jewish people have been on the rise, the Anti-Defamation League warns. And while the majority of anti-Semitic incidents involve harassment and vandalism, assaults have also happened, with at least six turning deadly since 2016, including at Pittsburgh's Tree of Life synagogue in 2018.