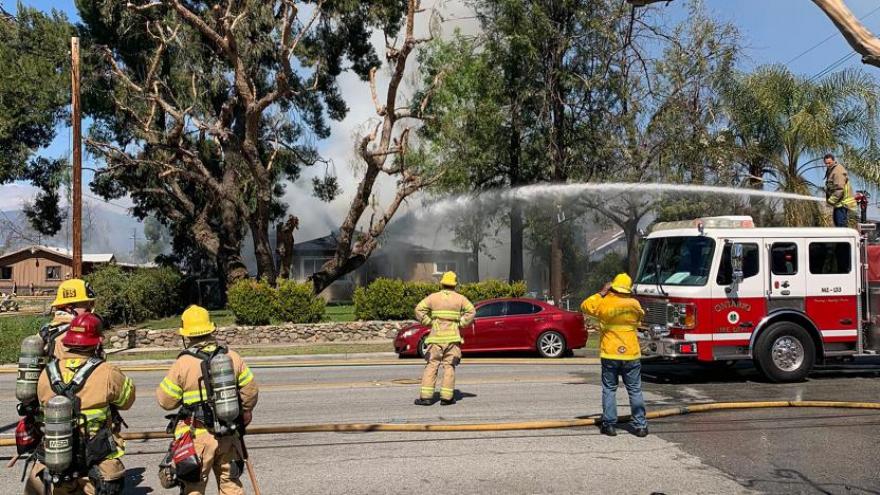 A powerful fireworks explosion at a home in Ontario, California, about 35 miles east of downtown Los Angeles, left two dead.

(CNN) -- Two people were killed Tuesday after a powerful commercial fireworks explosion in Ontario, California, according to the city fire department.

Multiple police and fire units responded to the scene -- about 35 miles east of downtown Los Angeles -- around 12:30 p.m. PST. A house was in flames, the department said.

Dramatic cell phone video shows fireworks and a plume of smoke rising above the scene.

"An explosion that size, I'd imagine there might be some damage to the houses directly next to it," said city spokesman Dan Bell.

Reina Jimenez, who lives close to the explosion area, told CNN there were at least three explosions.

"The first explosion was like an earthquake or like something fell outside near us," Jimenez said. "The second explosion was bigger and louder. It shook the whole house ... My husband started filming when the third explosion went off. It was also really big and loud and shook the house again. We were worried the explosion would reach the house so we started getting the kids ready to leave."

The deaths occurred "in the area" of the blast and the two individuals have not been publicly identified, Bell said. There were people in the house who were able to get out safely, according to a fire department spokesperson.

One additional minor injury was reported, the fire official said. The explosion is under investigation.

Evacuations were ordered for at least three streets in the neighborhood and fire officials warned residents to stay away from the area.

Multiple structures were damaged and covered with debris, the fire official said. At least one horse was released from the immediate area by firefighters.

Jimenez told CNN that her family has been hearing loud fireworks go off in the general area for the past five years.

"About once a week, one will go off or more during the summer or close to Fourth of July, and we just got used to them," she said.

People have complained on the Ring neighborhood app about the issue before, though, she said.