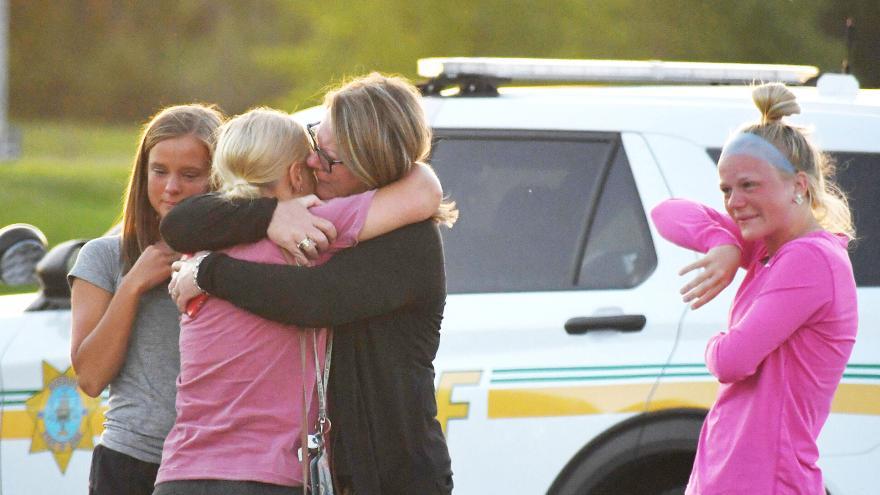 People console each other after a shooting outside Cornerstone Church in Ames, Iowa.

(CNN) -- Two college students were shot to death Thursday evening in a church parking lot in Ames, Iowa, police said, before the shooter fatally turned his gun on himself.

The shooting at the Cornerstone Church was the result of a "domestic situation" between the shooter, a 33-year-old man from the city of Boone, and one of the women, said Story County Sheriff Paul Fitzgerald at a news conference Friday.

Both women, ages 22 and 21, were students at nearby Iowa State University, he said.

"This is a very tragic event for our community but I think also nationwide as we experience violent incidents nationwide, and it only seems to increase," said Capt. Nicholas Lennie of the Story County Sheriff's Office.

The shooting came the same night President Joe Biden addressed the nation on the need for stricter gun laws. Gun massacres have left the country shaken and prompted new discussions about how to prevent them. The most recent incident was just a day earlier, when a man bought an AR-15 style rifle and attacked an Oklahoma hospital, killing four people and then himself.

In Iowa, authorities got a call of shots fired in the parking lot at 6:51 p.m., they said.

The shooter arrived in a pickup truck "and the chaos began," Fitzgerald said.

"He went right into action when he got there," he said. "He was there for a specific purpose, which he accomplished."

The shooter had been arrested May 31 on charges of third-degree harassment and impersonating a public official, all related to his recent breakup with one of the victims, Fitgerald said. He posted bond, Fitzgerald said, and was scheduled to be back in court June 10.

The shooting happened during the first summer night of a youth Bible study program, Fitzgerald said. About 80 high school and college students were in the church auditorium.

The shooter made no apparent effort to go into the church, Fitzgerald said.

It was a "targeted act of violence," he said. The shooter approached the women as they walked toward the church, fired "several rounds" and the two were dead "in a matter of seconds."

The shooter appears to have acted alone, he said.

At the shooter's home, authorities found an AR-15 rifle with ammunition that "played no part in this event whatsoever," Fitzgerald said. In the shooter's vehicle, they found more 9mm ammunition he bought an hour before the shooting.

"Our hearts break for all involved, and we are praying for everyone affected," Pastor Mike Vance said in a statement. "Our Ministry staff are available to support all those impacted, and we will continue to fully cooperate with authorities as they complete their full investigation."

"Tonight's act of senseless violence took the lives of two innocent victims at their place of worship," she said. "We ask that Iowans pray for the victims and their families, the members of Cornerstone Church, and the entire Ames community."

Ames is about 30 miles north of Des Moines.