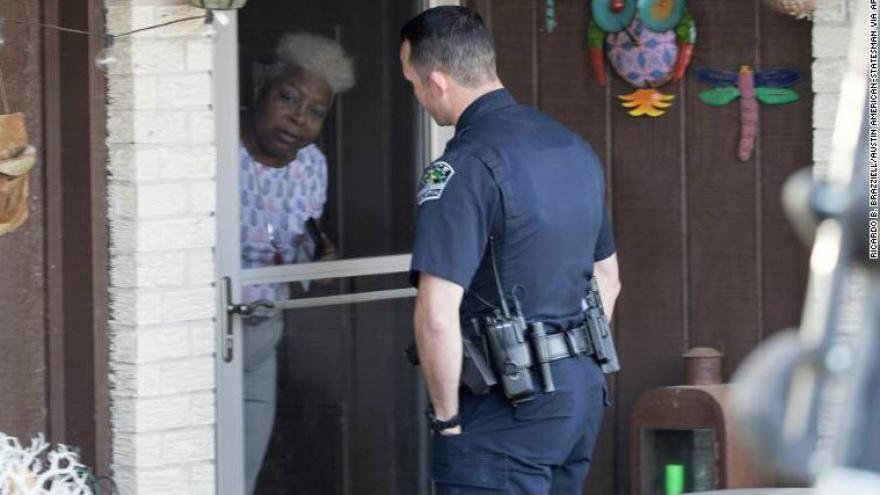 (CNN) -- Two package bombs that exploded Monday at residences in Austin, Texas, killing a teenage boy and critically injuring an elderly woman, appear to be linked to a March 2 bomb that killed a man, police said at a news conference.

All residents of Austin should be careful about packages, Manley said. Investigators have not come up with a motive, and he did not say if anybody has claimed responsibility. It's not known if the victims knew each other or if they were targeted, he said.

"If you've received a package that has been left on your doorstep or left in your yard or left on your driveway that you were not expecting or that was not from someone you know, then give us a call," Manley said.

Likewise, he urged the thousands of visitors in town -- many at the South by Southwest Conference and Festivals -- to be cautious. "Enjoy yourself, have a good time," he said. "But be aware, be suspicious."

SXSW began Friday in downtown Austin, bringing in thousands of people to the state capital. The explosions were not in the immediate vicinity of the festival and authorities say the bombings don't appear connected to the festival.

In describing the Monday morning blast that killed the teenager, the chief said: "What we understand at this point is that early this morning is that one of the residents went out front and there was a package on the front doorstep. They brought that package inside the residence and as they opened that package, both victims were in the kitchen, and the package exploded, causing the injuries that resulted in the young man's death and the injuries to the adult female."

That woman's injuries were not life-threatening, he said.

In the second Monday explosion, the package exploded when the elderly woman picked up the package, the chief said.

The March 2 explosion was first regarded as an isolated incident. Police now classify it as a homicide.

Police were processing the scene at the first Monday explosion when the second occurred.

Manley said the packages are "average sized delivery boxes, not exceptionally large" that the residents found outside their houses.

"These are very powerful devices," he said, declining to be specific. "There's a certain level of skill required to move a device like this."

Texas Attorney General Ken Paxton urged all Texans to be cautious. "With three reported explosions in the Austin area, I want to urge all Texans to report any suspicious or unexpected packages arriving by mail to local law enforcement authorities. Call 911 immediately if you receive something suspicious," he said on Twitter.

Local police, as well as agencies including the FBI, and the Bureau of Alcohol, Tobacco, Firearms and Explosives, are working on the case.

Gov. Greg Abbott announced a $15,000 reward for information leading to the identification and arrest of the person or persons involved in the package blasts.

Correction: A previous headline for this story on the CNN app incorrectly stated that the explosive packages were connected to the South By Southwest Festival, currently taking place in Austin. The police have not said there is a connection. The CNN app headline has been corrected.