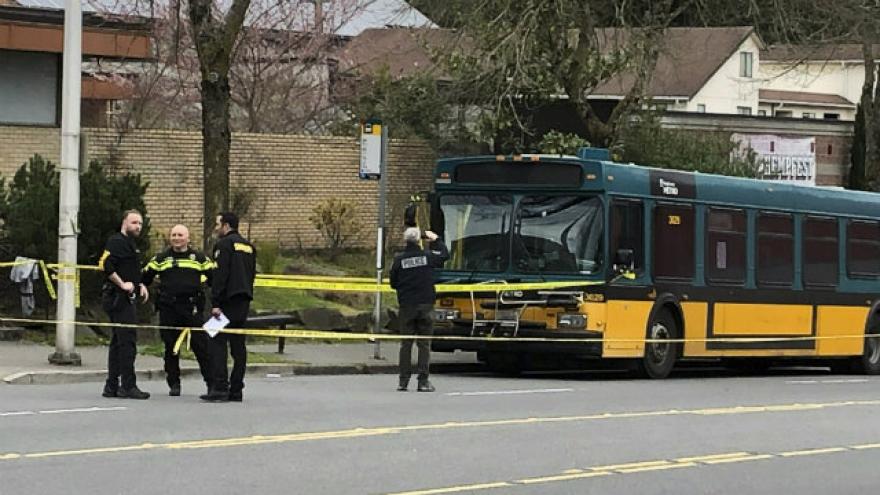 Investigators work on the scene of a shooting in Seattle on March 27, 2019. Two men were killed and two others were critically injured when a gunman opened fire in a street and then fled, leading to a fatal car accident. Photo courtesy Gene Johnson / AP

(CNN) -- Two men were killed and a man and woman were injured when a gunman opened fire in a Seattle street and then fled, leading to a fatal car accident.

The suspect, who has not been identified, was taken into custody Wednesday after a rampage that Seattle Police Deputy Chief Marc Garth Green described as a "random, senseless act."

Seattle police say that around 4:05 p.m. PT, a resident in the Lake City neighborhood walked outside with a handgun and approached a woman who was driving. He tried to carjack the vehicle, and in the process shot her, critically injuring her, authorities said.

Then the gunman walked into the street and fired at a Metro bus.

The bus driver was hit by the gunfire, but was able to turn the bus around and get away, police said.

The gunman then carjacked a red Prius, shooting and killing the 50-year-old driver, police said. When officers arrived, they tried to talk to the gunman, Green said. But the gunman closed the car door and took off in the Prius, with officers pursuing him for about a block and a half "at a high rate of speed," according to police.

During the chase, the gunman collided with another car, killing the other driver, a 70-year-old man, authorities said.

After a brief standoff, officers took the gunman into custody. He was taken to Harborview Medical Center with non-life-threatening injuries where he is under police guard.

"Our hearts go out to the families, the folks that are here, the folks who are affected by this and our community as a whole," Green told reporters. "We're outraged at what this suspect did."

Harborview received three patients, who were conscious when they arrived, said Susan Gregg, the spokeswoman for the hospital. None are in critical condition or suffering life threatening injuries, she said.

Dow Constantine, the King County executive, in a tweet praised the wounded bus driver for acting "heroically in the face of extreme adversity to protect his passengers this afternoon."

Green agreed, calling the bus driver a "very courageous individual" who did an "outstanding job."

"This bus driver truly is a hero. He was able to have the wherewithal to put the bus in reverse, back it up, turn it around -- which is no easy feat in and of itself -- and to take those passengers and himself out of harm's way, move to a different area, get those folks off the bus, and then get aid for himself."

A witness to the shooting, John Barrett, told CNN affiliate KOMO that he saw a man pointing a gun at people on the street, Sand Point Way.

"He was walking down Sand Point Way just firing at anything -- just without any regard, just kept firing," Barrett said.