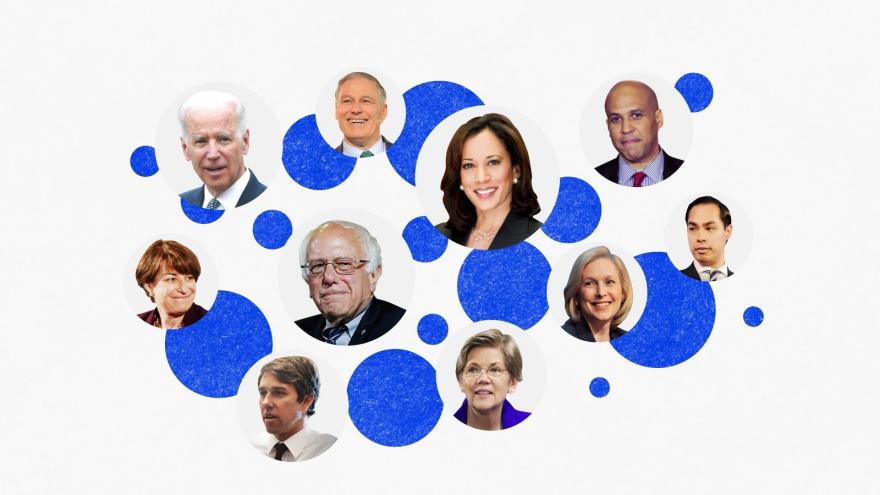 (CNN) -- The race to the Iowa caucuses, now less than eight months away, gets its unofficial kick-off this weekend as nearly 20 Democratic primary candidates swarm the state, holding dozens of rallies before gathering in Cedar Rapids on Sunday to take turns pitching a crowd of state party officials, activists and organizers.

The annual Hall of Fame dinner will be the largest event yet in a state that's already seen the titanic field of 23 hopefuls host hundreds of rallies, town halls and house parties. It comes just a few weeks before the first round of debates and, with each of the 19 candidates attending allotted just a few minutes to speak, will offer them something rare -- the undivided attention of Iowa's most dedicated Democrats.

And if the tone of last weekend's party convention in California is any indication, the speakers can also be expected to use their time to swipe at the frontrunners -- either hitting Vermont Sen. Bernie Sanders from the right, or jabbing former Vice President Joe Biden from the left. The shindig will also present yet another opportunity for Sen. Elizabeth Warren, the rising progressive from Massachusetts, to highlight her message -- which went over so well out west -- and entrench herself among the top tier of contestants. A good showing in Cedar Rapids, for Warren or anyone else, could have a multiplier effect, as the faithful in attendance leave to spread the word in their hometown precincts.

But there will be one big name missing from the menu this weekend and, notably, on Sunday afternoon: Biden, whose campaign told CNN that he has an important, previously scheduled family event that will keep him away. At a DNC gala in Atlanta on Thursday night, Biden said he was heading out for his granddaughter's graduation.

Biden will be in Iowa on Tuesday, the same day as President Donald Trump, and Wednesday -- a contrast his campaign, which has sought to keep him above, or away, from the Democratic primary fray, will surely welcome.

"These are Iowans who will have a very high propensity to caucus," Matt Paul, Hillary Clinton's 2016 Iowa state director, said of the audience at the Hall of Fame dinner. "The people in a busy summer weekend that come to Cedar Rapids on a Sunday afternoon to sit through 19 speeches are people who are absolutely going to caucus."

For the candidates, he added, there will also be an element of luck that, in such a long program, could help make or break their weekends.

"You want to either close it out and close it out with a stemwinder and knock it out of the park," Paul said. "Or you want to go first and be the speaker that everyone compares themselves to."

There is another variable the assorted headliners won't be able to account for going into the weekend: the release of a new CNN/Des Moines Register poll of likely Democratic caucusgoers in Iowa, which will land at 8 p.m. ET Saturday, less than 24 hours before they step up to speak.

Even in his absence, Biden is likely to feature prominently -- even if his name goes unspoken -- with Democrats on the ground this weekend tempted to unleash another series of jabs at the absent frontrunner. Sanders in his remarks at the California party convention last weekend made a pointed note of Biden's decision to campaign elsewhere.

"As you all know, there is a debate among presidential candidates who have spoken to you, here in this room, and those who have chosen for whatever reason not to be in this room, about the best way forward," Sanders said, without naming the former vice president. "So let me be as clear as I can be: In my view, we will not beat Donald Trump unless we bring excitement and energy into the campaign."

Warren also took her shot, however indirect, at the man who wasn't there -- along with other more cautious rivals who were.

"Some Democrats in Washington believe the only changes we can get are tweaks and nudges. If they dream at all, they dream small," Warren said. "Some say if we'd all just calm down, the Republicans will come to their senses. But our country is in a time of crisis. The time for small ideas is over."

As much as the mass audition in Cedar Rapids will offer some of the lesser known candidates a stage to make their names, the campaigns will also be using their time in the state -- on a weekend that figures to bring out so many potential voters -- to build contacts and engage with supporters and volunteers.

Pete d'Alessandro, Sanders' 2016 Iowa campaign coordinator and a senior Iowa adviser this time around, said the Hall of Fame event would be the "base" for a weekend of organizing -- not unlike four years ago.

"There could be campaigns that are saying, 'Yeah, we have to make a splash here' and then there's other campaigns -- and I think this is where we were last time -- where, you always want to do well and you're hoping to see some stuff resonating, but we were in such a field building organization mode" at this point in the last cycle.

California Sen. Kamala Harris, whose campaign recently announced she will be growing her Iowa operations by hiring 65 new paid staffers by July 1 amid plans to return to the state three times over the next five weeks, will be among those ramping up activities here as the campaign heats up in the coming months.

Deidre DeJear, Harris' Iowa chair, said the campaign sees the Sunday event as a springboard to a summer of organizing and Harris' speech as an invitation to the highly engaged activists in the room.

To that end, Harris will host a pre-Hall of Fame rally in the same venue as the big event so that the attendees will be able to hear more from her than just her five-minute speech.

For Biden, there is "certainly risk" in missing out on the weekend swirl, said Paul, the Clinton campaign veteran. But he also noted that then-Sen. Barack Obama missed the event in 2007, a decision that "certainly worked" in the end for the future two-term president.

"I can understand the decision to want to do your own event, you are more than likely going to see the people who are in the room several times before the caucuses," Paul said. "But it would have been a good opportunity for him to demonstrate the support he has in the state, which is significant."