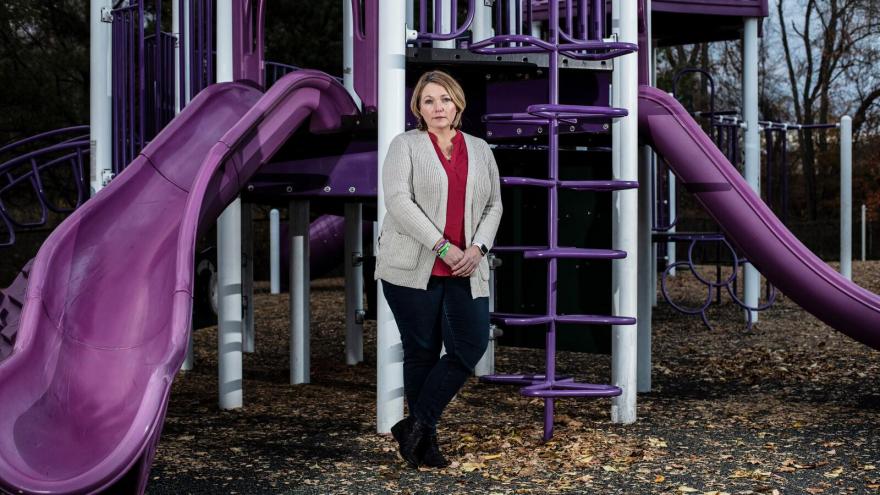 Nicole Hockley poses for a portrait at a playground dedicated to her son Dylan, a Sandy Hook victim, in Westport, Connecticut.

By Jeanne Bonner, CNN Photographs by Bryan Anselm/Redux for CNN

(CNN) -- From afar, it looks like any playground. Kids are playing after school on a cold fall day, as the temperature drops and a family of deer appears briefly. Similarly, a blonde-haired woman in jeans resting for a moment on one of the swings could be any mom.

But the playground is a memorial to Dylan Hockley, one of 20 first-graders killed in 2012 at Sandy Hook Elementary School in Newtown, Connecticut, in one of the deadliest school shootings in American history. And the woman is Nicole Hockley, Dylan's mother, who since the tragic death of her 6-year-old son has dedicated her life to preventing similar tragedies.

The playground is one of 26 that were built in the shooting's aftermath -- one for each of the 20 first-graders who died and the six educators who gave their lives trying to protect the school children in their care.

Tuesday, December 14 marks nine years since Adam Lanza burst into the elementary school and opened fire. The shooting rocked the nation, prompting a normally stoic President Barack Obama to tear up at a news conference.

As horrific as the killing was, there hasn't been a major change in federal gun safety policy in the United States. While Obama vowed that "These tragedies must end," congressional efforts he backed for comprehensive gun control failed soon after the rampage. The legislation would have included expanded background checks and a new assault weapon ban.

Meanwhile, school shootings -- like the one in Oxford, Michigan, last month that took the lives of four students -- continue, even after high-profile massacres at Marjory Stoneman Douglass High School in Parkland, Florida, and Santa Fe High School in Texas spurred outrage and activism.

But that doesn't mean Sandy Hook didn't mark a shift in mass shootings in the US, nor that its legacy is confined to the memory of the innocent people lost.

The parents of the slain children have been unusually vocal about the horror they experienced, and they have used their unique perspective to become powerful advocates for more gun safety and expanded mental health resources at schools.

And their grief has inspired others to act.

"What didn't exist before Sandy Hook was a grassroots movement that could go toe to toe with the gun movement and win," said Shannon Watts, a mother of five who didn't lose a child at Sandy Hook but who was so angry about the massacre that she immediately formed Moms Demand Action.

Watts points to 21 states with expanded background check laws, a supporter base of eight million volunteers ready to fund the cause that now rivals the National Rifle Association's membership and a national focus on electing candidates who favor gun safety, including Georgia Congresswoman Lucy McBath.

The Sandy Hook parents also formed non-profits to enact changes. Hockley's non-profit, Sandy Hook Promise, advocates for gun safety, often with provocative videos. In one, children show how their back-to-school shopping can be used in a shooting. One boy extols his new sneakers while he is seen running from an active shooter, while another girl hiding in a bathroom stall uses a new cell phone to send her mother a final message. The video has been viewed on YouTube nearly eight million times.

Nine of the families of victims also took the unprecedented step of targeting gun marketing in a suit against manufacturer Remington, which was forced to offer a $33 million settlement this fall. Previous wrongful death lawsuits against gunmakers had failed, but the Sandy Hook families argued that Remington advertised the product as a combat weapon, in violation of a Connecticut law that prevents deceptive marketing practices.

The parents' efforts have influenced school safety protocols and helped shift a focus on mental health, said Michele Gay, whose daughter Josephine was killed. She said before Sandy Hook, safety was often not a budget line item for elementary schools. She and Alissa Parker, whose daughter Emilie also died at Sandy Hook, launched a group called Safe and Sound Schools. The group holds a national school safety summit each year. The non-profit also conducts programs to help school personnel and students identify signs a child may be struggling with mental health issues.

'I consider this playground his memorial'

And another part of the shooting's legacy is similarly enduring.

The parents backed a project that provides a physical legacy to the shooting that's visible to more than just the Newtown, Connecticut, community: a network of 26 playgrounds in New York, New Jersey and Connecticut that are dedicated to the victims of the shooting. Each playground honors one of the slain victims and is decorated with photos, favorite images and even messages written in the victims' handwriting. Dylan's playground in Westport, Connecticut, for example, features the butterflies he loved so much.

In the years since the tragedy, the shooting has torn the Sandy Hook families apart. While nine of the families sued Remington, the gun manufacturer, most did not. Ten of the families have sued the conspiracy theorist Alex Jones, who insists the shooting was staged. Last month, a Connecticut state judge found Jones, who runs the InfoWars website, liable for defamation. A separate lawsuit is pending in Texas.

While some have taken on public campaigns for gun safety or mental health, others have sought privacy. Some families have relocated to other parts of the country. Others have faced hardships like divorce. The families were approached by myriad charities, with good intentions but perhaps with their own agendas.

But the playgrounds unite them.

"It's the only thing all 26 families agreed to," Hockley told CNN in an interview at Dylan's playground. "I consider this playground his memorial."

Michelle Gay agrees. "It was very important to move forward with our daughter, in a way that connected us to her spirit, to her positively," she told CNN.

Hockley and her ex-husband, Ian, were the ones first approached about the playgrounds by Bill Lavin, who at the time was a firefighter and president of the New Jersey State Firefighters' Mutual Benevolent Association. He had a vision for playgrounds as highly personal memorials to the victims. And the group he formed, Where Angels Play, collaborated with the Sandy Hook parents to design and build the playgrounds.

In interviews, some of the parents of children who died at Sandy Hook said the playgrounds should be a place where kids can be kids, first and foremost. But they also hope it will spur questions about the tragedy and the ways it could have been prevented.

Mark Barden, whose son Daniel was one of the first graders killed and whose playground in Highlands, New Jersey, features Daniel's drawings, said the playgrounds provide "a tangible reminder" and "an insight into what is lost and what continues to be lost." That reminder is for people who were not necessarily touched by the event, said Barden, who help formed Sandy Hook Promise, which has an anonymous hotline for school kids in 22 states that has fielded 82,000 tips used by police, according to Barden, to prevent some 60 credible school shooting plots.

"People who have no reason to think about it (gun safety) but who find themselves at the playground will think about it," said Barden. "We hope people will think about how they can get involved in something that leads to solutions around this epidemic of gun violence."

It's a conversation Dan Canavan thinks people should be having. On a windy fall day, Canavan, 46, was walking on the beach by the playground in Fairfield dedicated to Jessica Rekos, which features a horse drawing.

Canavan said he visits often with his two children, and that during the summer it's mobbed with kids and families.

"My kids think it's the best playground," he said. "They love it."

They don't know yet why the playground is there or much about Rekos, one of the slain first-graders, he said, because they are only ages 3 and 6, but Canavan said he knows that conversation is coming one day, and it won't be easy.

"People should be talking about it," he said. "Not only because of the playground, but hopefully the playground keeps the conversation going."

At another playground, in Norwalk, Connecticut, Chris Campbell shakes his head. The playground at Oyster Shell Park, which features goldfish, is dedicated to first grader Allison Wyatt.

"It's heartbreaking. Let's have sane gun control," the 69-year-old told CNN as he walked near the playground. "Let's not have to build playgrounds like this for kids."

Lavin -- the man behind the construction of the playgrounds and who has forged enduring bonds with the victims' families -- agrees.

"I hope one day we don't have to build any more playgrounds," he told CNN. "But until that happens, we're here to honor the victims."

Lavin admits it's easy to be discouraged.

"Here's the frustration: the polls say the vast majority are in favor of background checks and common-sense gun control," Lavin said. "Nobody is against the hunters. There are members of Sandy Hook families who are gun owners."

But Lavin said he takes his inspiration from the parents who are dogged in their conviction that "their loved ones didn't die in vain" and school shootings can be stopped. And that may mean some uncomfortable moments on the playgrounds for parents untouched by the shooting.

"We want people to imagine if you had to have a playground built in honor of your child because of a lapse in laws or the accessibility of firearms," he said. "Because only by imagining it will people maybe act."

The foundation that built the Sandy Hook playgrounds has built 57 playgrounds, mainly for victims of tragic events. And some of the parents and loved ones of those who perished at Sandy Hook continue to help out by traveling with Lavin to the new sites and breaking ground.

The surviving parents say their kids' playgrounds keep the focus on the children and underscore what we all have in common, regardless of where people may stand on gun control policy.

"Anyone who has children in their lives -- not only as a parent but an aunt or a caregiver or a neighbor -- there's common ground," Hockley said. "These tragedies are preventable."

Michele Gay, whose daughter's playground in Bridgeport, Connecticut, features puzzle pieces as a symbol of the autism Josephine had, feels the same way.

"It is an evolving conversation for families," she said. "Our kids will eventually be part of the solution and make sure schools are safe and sound."

Parents like Gay shake their heads when people say nothing has changed since Sandy Hook. Watts of Moms Demand Action agrees.

Inspired by the approach taken by Mothers Against Drunk Drivers in the 1980s, Watts lists legislative wins on the state level. In addition to convincing 21 statehouses to pass background checks, she said they have successfully lobbied 19 state legislatures and Washington, DC, to enact extreme risk laws aimed at temporarily disarming someone deemed a threat to others. She also said the gun safety movement now outspends the NRA during elections.

Back at Dylan's playground in Connecticut, Nicole Hockley remarked that it's particularly hard to recall the tragic events when she considers the fact that Dylan would now be 15 years old.

Tearing up for the first time since she began the interview, she said, "I miss him terribly."

On Tuesday, as she marks nine years since losing her son, she will be at Dylan's playground.