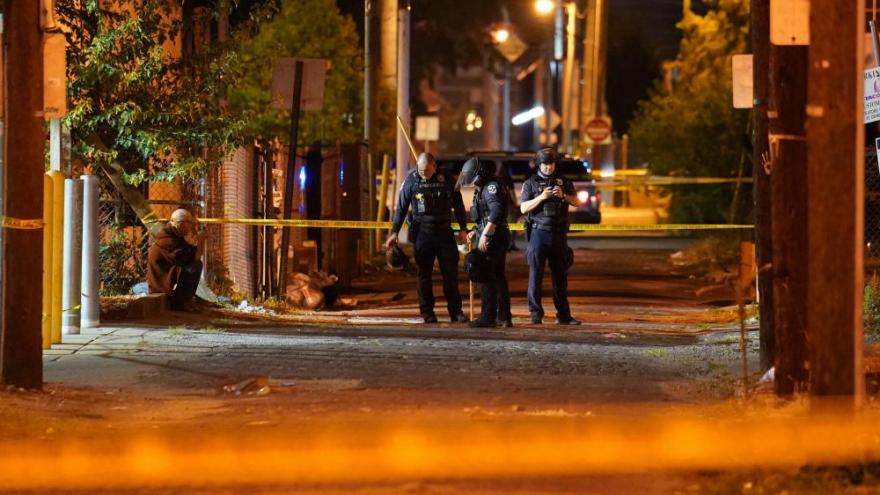 (CNN) -- Police have arrested a 26-year-old suspect in the shooting of two police officers during protests in Louisville, Kentucky, over the charging decision in the case of Breonna Taylor.

The officers suffered non-life-threatening injuries on Wednesday night, according to police.

CNN couldn't immediately determine Thursday whether Johnson had attorneys who would speak on his behalf. He's expected to be arraigned Friday morning.

Both of the wounded officers are expected to recover, Louisville Metropolitan interim Police Chief Robert Schroeder told reporters. He identified them as Maj. Aubrey Gregory and Officer Robinson Desroches.

"We are extremely fortunate that these two officers will recover," he said.

Hours before the shooting, Kentucky Attorney General Daniel Cameron announced that none of the three Louisville police officers involved in Taylor's death would be charged directly for her killing.

One of the officers, former Det. Brett Hankison, faces three counts of first-degree wanton endangerment for allegedly firing blindly through a door and window, with bullets entering an adjacent apartment where a pregnant woman, a man and child were home, the attorney general said.

The long-anticipated decision was met with outrage and heartbreak from community members and activists, who have rallied around Taylor, her family and her case in recent months amid a reckoning over racial injustice and police brutality.

Gunfire rang out near one of the marches Wednesday shortly before a 9 p.m. ET countywide curfew, according to videos from the scene and reports.

Police were starting to move forward as three apparent flash bangs were fired into the air toward protesters, a video livestreamed by the Louisville Metro Police Department shows. Nine shots are heard in videos taken by police and Regg Inkagnedo, who also livestreamed the moment.

Shots are also heard on a third video obtained by CNN. In that footage, officers quickly approach an ambulance and apparently load an injured person into it, the video by CNN affiliate Spectrum News 1 Kentucky reporter Khyati Patel shows.

In a statement, the FBI's office in Louisville asked for the public to share information or videos they have related to the shooting.

Gregory, who joined the department in 1999 and is a commander of the department's special operations division, suffered a gunshot wound to the hip, Schroeder said. He's been released from the hospital.

Gregory was leading operations on the ground, and Schroeder praised him for his work over the last several months as a leader in the police response to protests, calling him the "bedrock" of those efforts.

Gov. Andy Beshear told CNN he spoke to one of the officers, who he said had a "very good" prognosis and was in good spirits. Beshear also spoke with the mother of the officer in surgery, he said.

"When we think about everybody's pain today, these individuals are also people's children, often times people's parents, and we are rooting for a full recovery," the governor said.