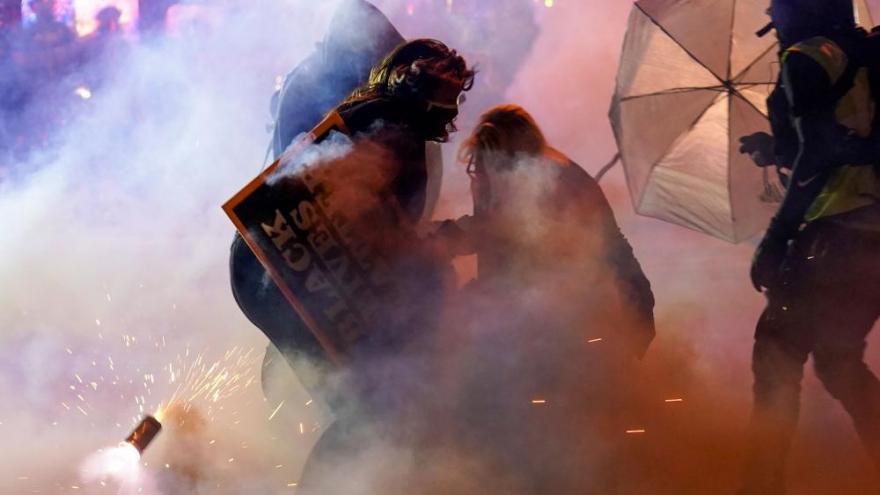 Tensions escalated for a third night in Wauwatosa, Wisconsin, as police used tear gas on demonstrators, who were protesting the fatal shooting of Alvin Cole by police.

(CNN) -- Nearly 30 people were arrested late Friday as tensions escalated for a third night in Wauwatosa, Wisconsin, where officers used tear gas on demonstrators against the fatal police shooting of Alvin Cole.

Clashes between police and protesters followed news that Officer Joseph Mensah, who shot 17-year-old Cole in February, will not face criminal charges -- a decision that sparked protests amid a monthslong wave of nationwide demonstrations over how police treat Black people.

Police and the National Guard are working to patrol Wauwatosa, and a curfew is in effect nightly from 7 p.m. to 6 a.m. until Monday.

Wauwatosa police, with the assistance of other law enforcement agencies, arrested 28 people, according to a department statement on Saturday.

Two arrests were on felony charges, one was a misdemeanor arrest, and 25 were municipal arrests, police said. Two of those arrested were evaluated for minor injuries.

One arrest involved the driver of a vehicle that nearly struck a police detective after a group of people gathered outside the Wauwatosa Police Department just after 1 a.m. Saturday to demand the release of prisoners.

Police recovered a handgun and a stolen vehicle.

About 75 demonstrators began gathering outside City Hall around 5 p.m. Friday, police said. After about an hour, more than 200 demonstrators had amassed in separate groups. National Guard members were deployed.

Just after the 7 p.m. curfew, the statement said, police made first of four unlawful assembly announcements and directed the crowd to disperse. At about 8 p.m. law enforcement advanced toward the crowd and some demonstrators hurled rocks and bottles at them. Police said they responded with tear gas, pepper balls and paint balls.

Police said some demonstrators tried to use dumpsters to block a street. Others tried to start fires. One group broke the windows of a gym, police said.

The confrontation between police and protesters Friday also followed the arrests of Alvin's mother and sisters Thursday night, according to the family's attorney Kimberly Motley.

Alvin's mother, Tracy Cole, who uses a cane, was taken to a hospital with a large bump on her forehead and an injured arm that, Motley said, resulting from "roughly being handcuffed." Tracy and Tristiana Cole later were released from the hospital, Motley added.

"It's unclear why they were arrested. At the time of their arrest, they were in their vehicle -- they got pulled out of their vehicle," the attorney said. "Tracy -- who walks with a cane, who is a peaceful protester -- was essentially assaulted and then taken to the hospital by police and sustained injuries as a result.

"Their car was impounded. Taleavia Cole and Tayudah Cole were taken to two different precincts in two different cities following their arrests. All have been released without charges," she said.

A total of 24 people were arrested Thursday, and two of them asked for medical attention, Wauwatosa police said in a news release Friday.

A police spokesperson told CNN Motley also advised that Tracy Cole received medical treatment, but her arm was not broken. Police did not have the details of the second arrest requiring medical attention.

Alvin Cole was shot and killed outside a Wauwatosa mall on February 2 when officers responded to a disturbance call, police said. Wauwatosa Police Chief Barry Weber told reporters at the time that Alvin fired a gun before an officer returned fire.

Milwaukee County District Attorney John T. Chisholm wrote in a letter to the Wauwatosa police chief that there was "sufficient evidence" showing that Officer Joseph Mensah believed deadly force was necessary and "that belief was objectively reasonable."

The prosecutor in his report said Alvin had a stolen 9 mm pistol while he was at the mall and displayed the pistol during an argument with another patron.

"He was encountered by Wauwatosa Police officers in the parking lot of Mayfair Mall, ran from the police, discharged the firearm and was ordered to surrender the weapon," Chisholm wrote. "He did not surrender the weapon and was fired upon by Officer Mensah causing his death."

Chisholm released an eight-minute compilation video of the night Alvin was fatally shot.

The video shows what looks like an officer walking toward something and pointing a gun. Someone says "drop the gun," before a gunshot sounds. Alvin cannot be seen in the footage at the time of the shooting. What sounds like several gunshots can be heard soon afterward.