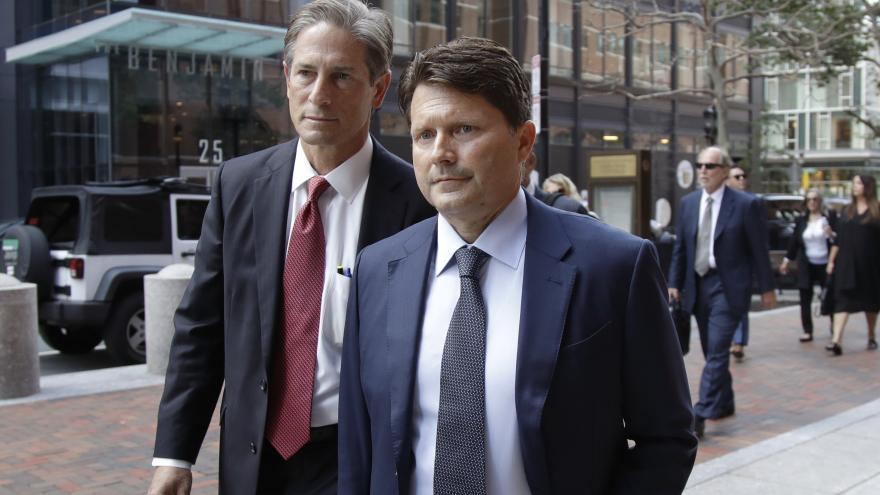 (CNN) -- An executive who paid $250,000 to get his son into the University of Southern California falsely as a water polo player was sentenced to four months in prison as part of the college admissions scam, a federal judge ruled Tuesday.

Devin Sloane, the founder and CEO of a provider of drinking water and wastewater systems, also must serve 500 hours of community service and pay a $95,000 fine, the US Attorney's Office for the District of Massachusetts said.

Sloane pleaded guilty to conspiracy fraud in May. Prosecutors had recommended he be sentenced to one year and one day in prison, a year of supervised release, a fine of $75,000, forfeiture and restitution.

Sloane is the second parent to be sentenced in the college admissions scam, and his sentence represents the most significant punishment so far in the case. Earlier this month, the actress Felicity Huffman was sentenced to 14 days in prison, 250 hours of community service and a $30,000 fine for paying $15,000 to the scam's mastermind to boost her daughter's SAT scores.

A total of 35 parents have been criminally charged as part of the sprawling investigation into the scheme to cheat, bribe and lie to get an advantage in the college admissions system.

As described in the complaint, Sloane carried out some of the more egregious -- and comical -- actions of the scam.

As part of his and Rick Singer's plan to get Sloane's son into USC as a water polo recruit, Sloane purchased water polo gear, including a ball and cap, on Amazon, the complaint says. He then emailed a graphic designer a photo of his son purporting to play water polo wearing that gear.

Sloane then sent Singer an edited photo of his son in water polo gear with his right arm and upper torso above the water line of a pool.

"Yes but a little high out of the water- no one gets that high," Singer replied.

Sloane then sent another version of the photo in which his son appears to be lower in the water. Singer said that was "perfect."

Singer then emailed USC coach Laura Janke to create a fake profile for Sloane's son that said he was a perimeter player for the "Italian Junior National Team" and the "LA Water Polo" team.

This false profile was presented to the USC subcommittee for athletic admissions in November 2017, and the son was accepted to the university.

The acceptance raised eyebrows, though. Sloane's son's high school did not have a water polo team, and one of the high school counselors questioned his college acceptance, the complaint states.

Heinel, who was fired by USC in March, has pleaded not guilty to racketeering conspiracy.