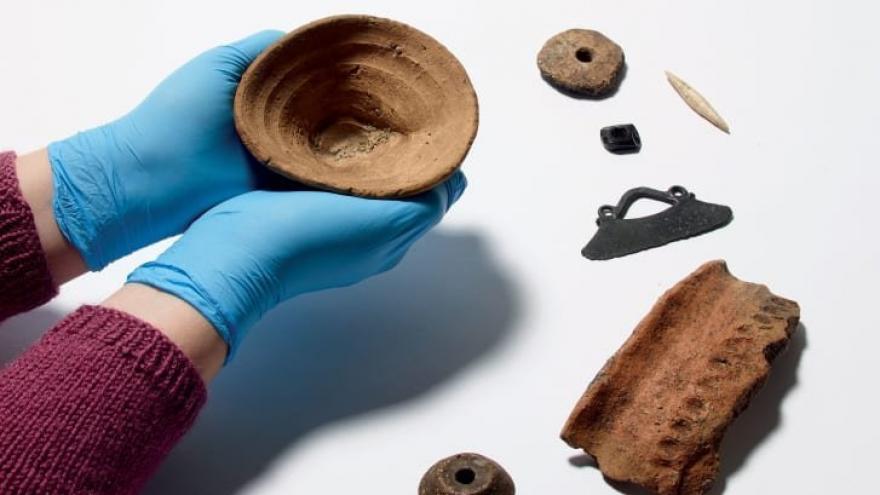 Thousands of the cups, designed to contain wine, have been discovered in archeological sites on Crete. Source: Trustees of the British Museum
Originally Published: 16 DEC 19 07:34 ET
Amy Woodyatt, CNN

(CNN) -- A disposable cup sits in a museum gallery, fully intact even after being cast aside thousands of years ago.

But this isn't a vision of the future -- a 3,600-year-old cup, designed to be thrown away after a single use, will go on display at the British Museum in London.

The handleless clay cup was made by the Minoans -- one of the first advanced European civilizations -- between 1700 and 1600 BC on the Greek island of Crete.

Thousands of the vessels, designed to contain wine, have been discovered in archeological sites on the island, and experts believe the cups were designed to be used just once and then cast aside after feasts.

"The elite were showing off their wealth and status by throwing these great big parties, feasts and festivals," Julia Farley, a curator at the British Museum, told the PA Media news agency.

"People were getting together in large groups and much like today, nobody wants to do the washing-up," Farley added.

The cup will go on show in the display "Rubbish And Us" at the British Museum, alongside more modern examples of single-use products shown to have unexpected endurance -- including a waxed paper cup made for serving hot drinks on flights and airports in the 1990s.

"People may be very surprised to know that disposable, single-use cups are not the invention of our modern consumerist society, but in fact can be traced back thousands of years," Farley said in a statement.

"Three and a half thousand years ago, the Minoans were using them for a very similar reason to us today: to serve drinks at parties. The only difference is the material," she said.

"With ceramics being a higher status material to us now, it seems strange to throw them away after just one use. But like plastic today, clay was readily available, cheap to acquire, easy to mold. But also like plastic, clay stays in the ground for many, many years," she added.

Packaging is filling up landfills and polluting our oceans, where materials like plastic and polystyrene can take centuries to decompose.

While some governments and companies are taking steps to reduce the use of throwaway packaging, we are already seeing the effects of pollution on the natural world.

Earlier this year, researchers found that seabirds are becoming smaller and lighter and suffering from a litany of health problems after ingesting the plastic that litters the world's oceans.

Almost 1 million shoes and over 370,000 toothbrushes were among more than 400 million pieces of plastic recently found washed up on a remote group of islands in the Indian Ocean.