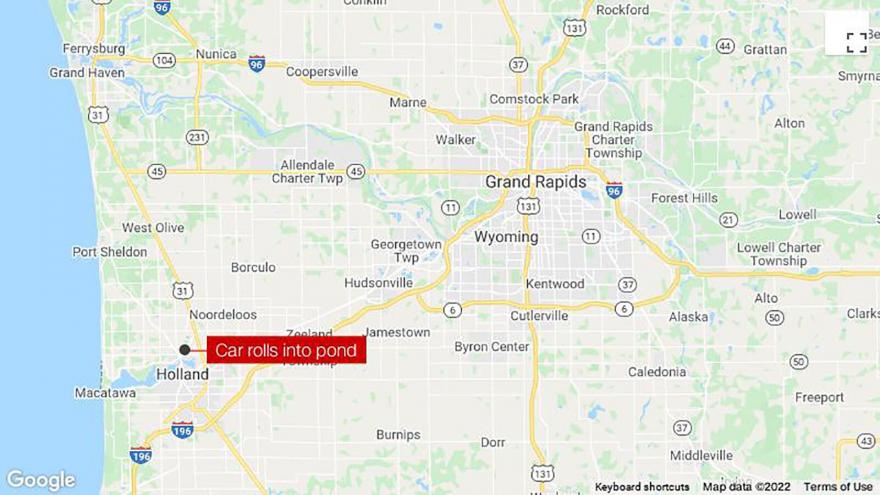 Three brothers died in Michigan after their car gets trapped in an icy pond.

(CNN) -- Three young brothers died in Michigan after the car they were in struck a curb and rolled into an iced-over retention pond in Holland, Ottawa County Sheriff's Lt. Eric Westveer said.

The mother of the three boys swerved her Chevy Tahoe into oncoming traffic on Thursday around 11a.m., hit a curb and rolled into the pond, Westveer told CNN Saturday.

The 30-year-old mother, whose name was not released, was able to escape the vehicle but could not free her sons, who were all restrained by seat belts and car seats, Westveer said.

Authorities eventually freed the boys from the partially submerged vehicle, which was upside down in 3-to-4-feet of water, and transported them to local hospitals, Westveer said.

The mother was treated for minor injuries at Zeeland Community Hospital and released, officials said.

Westveer told CNN the cause of the accident is still under investigation, but said he did not have any specific evidence suggesting that the mother was under the influence. The conditions of the road were likely not a factor in the incident because the roads were dry at the time, he added.

According to CNN affiliate WWMT, Capt. J. Douglas with the Ottawa Sheriff's Department said deputies were on the scene within three minutes and rushed into the icy water. The vehicle flipped over and penetrated seven inches of ice, he added.

By the time first responders removed the last child from the vehicle, it had already been submerged for roughly 12 minutes, Douglas told WWMT.

Holland is on the coast of Lake Michigan, southwest of Grand Rapids.

Correction: A previous version of this story incorrectly stated where the mother was treated for her injuries. She was treated at Zeeland Community Hospital.