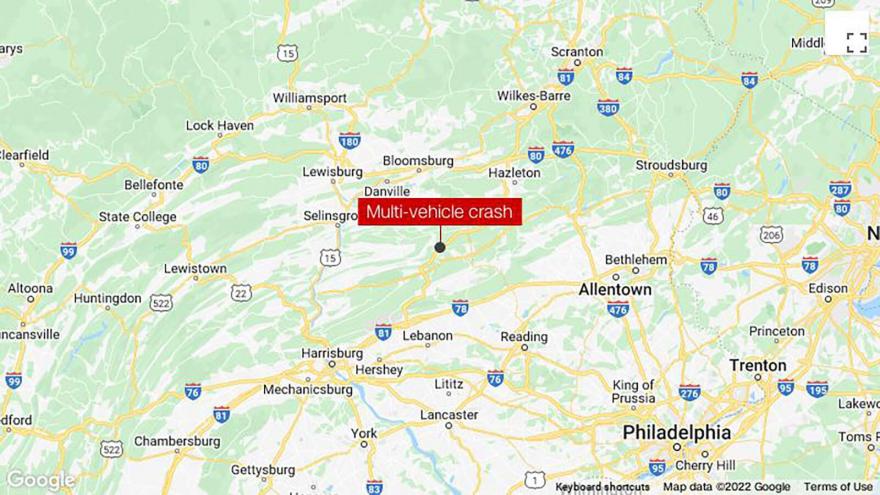 At least 25 vehicles were involved in a crash on a major highway in eastern Pennsylvania during a snow squall on March 28.

(CNN) -- At least three people have died after a snow squall led to a multi-vehicle crash on a Pennsylvania highway on Monday, state coroner's office spokesman John Mika confirmed to CNN.

Heavy fog and precipitation from the squall caused a mass pileup of about 40 vehicles on Interstate 81. About 20 people were taken to area hospitals, according to John Blickley, deputy emergency management coordinator for Schuylkill County.

Over two dozen fire companies responded to the crash, where multiple vehicles were on fire, Blickley said.

The pileup happened shortly after 10:30 a.m. on Monday in the northbound lanes of Interstate 81 near mile marker 116, Blickley said. The location is about 50 miles west of Allentown. The Pennsylvania Department of Transportation wrote in a tweet Monday morning that all lanes of the highway were closed near the crash.

Mike Moye was one of those caught up in the crash and captured video of the mayhem. He told CNN he was driving on I-81 when the snow and fog made it difficult to see the road, so he pulled his Dodge Charger over to the side of the highway.

"I thought it was going to be okay. I thought the cars in the back would know to slow down but no one slowed down. They just kept piling up," he told CNN.

Moye got out of his car and walked off the road and began filming as a series of cars and trucks skidded down the road and slammed into the backs of other vehicles.

Down the road, huge plumes of smoke flood out of a truck that caught fire, the video shows. Moye was not injured, he told CNN.

Other videos show the aftermath of the pileup. Drone footage of the scene shows dozens of cars and trucks pointed in various directions across the road.

Videos from another driver, Basia Szydlowski, show the vehicles, at ground level, splayed across the highway.

A snow squall warning for the county and several others in Pennsylvania was in place until 1:30 p.m., the National Weather Service said. A snow squall is an intense period of moderate-to-heavy snowfall of limited duration that is accompanied by strong, gusty surface winds and possibly lightning. Snow accumulation may be significant.

A strong arctic front moved across the New York and New England region on Monday, bringing snow squalls that were expected to lead to dangerous travel conditions.

There wasn't a snow squall warning issued for the location of the accident at the time the crash happened. However, a narrow band of snow was falling in the vicinity and across I-81 based on radar data analyzed by CNN meteorologists. Winds of over 20 mph were reported in the region, which could have resulted in low visibility.