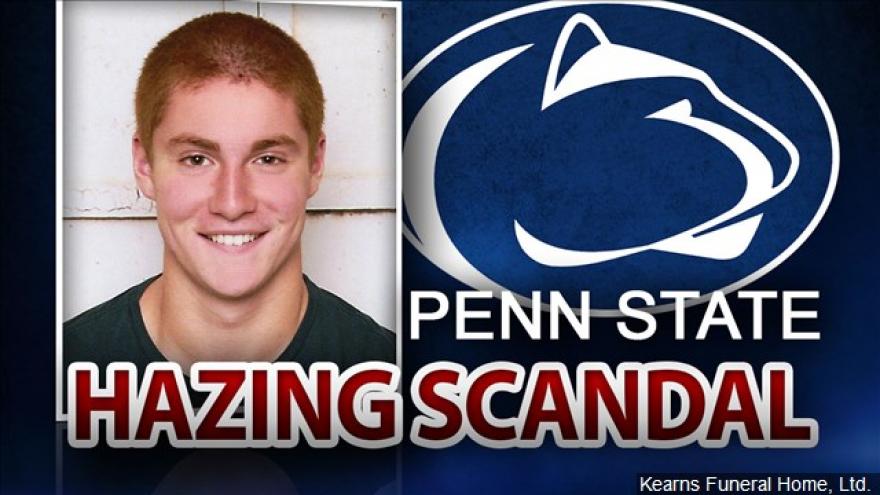 (CNN) -- Four former Penn State University fraternity brothers have been sentenced in connection with the death of a pledge during a hazing ritual, with three receiving jail time, according to a source familiar with the case.

Each had pleaded guilty to hazing-related charges in connection with the February 2017 death of 19-year-old Timothy Piazza, a sophomore at Penn State. Piazza died after drinking large quantities of alcohol during his first night of pledging at Beta Theta Pi fraternity.

This the first time jail sentences have been handed out in the case, though there is a possibility a judge may amend the sentences to house arrest, the source said.

Piazza was pledging the Beta Theta Pi fraternity when he drank 18 drinks in 82 minutes as part of a hazing ritual. He fell down a flight of stairs into the fraternity house's basement, and fraternity members waited 12 hours to call 911. Piazza ended up dying from a traumatic brain injury, according to court records and testimony.

Piazza's blood-alcohol level went "from a zero to as high as a .36," a grand jury report said, four-and-a-half times the legal limit.

Eleven Penn State Fraternity members went to trial in the death. Charges initially included involuntary manslaughter and reckless endangerment, but those were dismissed by the judge.

In December, Pennsylvania Gov. Tom Wolf signed an anti-hazing bill named after Piazza that requires Pennsylvania schools to have policies and reporting procedures in place to stop hazing.

The state became the 45th to enact anti-hazing laws -- 12 of those make hazing a felony if it results in death or serious injury --and there have been more than 77 fraternity-related deaths across the country since 2005.