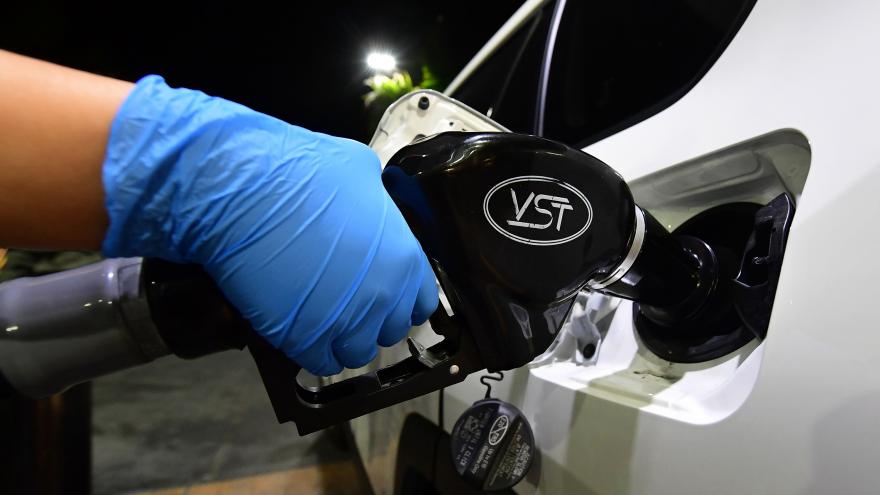 A person wearing a glove fills gas at a petrol station in Los Angeles, California on April 21, 2020, a day after oil prices dropped to below zero as the oil industry suffers steep falls in benchmark crudes due to the ongoing global coronavirus pandemic. - US oil prices surged on April 22 after falling below zero for the first time at the start of the week as markets drown in crude due to a virus-triggered collapse in demand. - Frederic J. Brown/AFP/Getty Images

(CNN) -- OPEC and Russia's unprecedented production cuts last spring lifted oil prices out of a death spiral. Nearly a year later, the group is under pressure to cool off the red-hot market.

US crude has raced back above $60 a barrel. That's a far cry from the depths it reached last April when oil crashed below zero (negative $40.32 a barrel, to be exact) for the first time in history. Prices at the pump are starting to creep higher, too. The national average hit $2.70 a gallon Friday, according to AAA. That's well above the April low of $1.76 per gallon.

Investors are betting the pandemic will soon be under control — and that in turn will unleash pent-up demand for road trips, cruises, flights and other oil-consuming activities.

Against this backdrop, OPEC and its allies, known as OPEC+, are scheduled to meet Thursday to deliberate whether to add more barrels into to the hungry market. They've certainly got the firepower, and the price incentive, to do just that.

Last year, OPEC+ slashed output by a record-shattering 9.7 million barrels per day. The emergency steps, along with production cuts by US and other producers, drove a strong rebound in prices. That recovery has accelerated in recent months as millions of people around the world have gotten vaccinated against Covid.

OPEC+ could soon announce the market is now healthy enough to step up production this spring.

"Given the allure of higher prices, there should be more supply coming onto the market," said Ryan Fitzmaurice, energy strategist at Rabobank.

Indeed, sources within OPEC+ told Reuters last week that an output increase of half a million barrels per day beginning in April is possible without building up inventories, although a final decision had not been made.

"Given where prices are, how will anyone tell Russia that they need to curtail production?" said Jim Mitchell, head of Americas oil analysts at Refinitiv.

There are several good reasons for OPEC+ to release more barrels.

First, higher prices mean countries like Saudi Arabia that rely on oil to balance their budgets can bring in badly-needed revenue.

Second, if OPEC+ doesn't start producing more, other countries will. That includes frackers in Texas who were sidelined by the oil crash.

Bank of America strategists told clients in a recent note that OPEC+ will "preserve market share" by pumping more soon. During the second quarter alone, Bank of America expects OPEC+ to add more than 1.3 million barrels per day of supply.

There's another reason OPEC+ will want to act before it's too late: self-preservation.

If gasoline prices keep rising and hit $3 a gallon — and beyond — it will only accelerate clean energy investments and persuade more drivers to dump their gas-guzzling SUVs for electric vehicles.

"If oil shoots up to extreme levels," said Rabobank's Fitzmaurice, "that only helps the renewables story and eats away at oil demand."

Hyundai is recalling 82,000 electric cars globally to replace their batteries after 15 reports of fires involving the vehicles. Despite the relatively small number of cars involved, the recall is one of the most expensive in history.

The numbers: The recall will cost Hyundai 1 trillion Korean won, or $900 million. On a per-vehicle basis, the average cost is $11,000 — an astronomically high number for a recall.

The episode signals how electric car defects could create hefty costs for automakers — at least in the near future, report my colleagues Chris Isidore and Peter Valdes-Dapena.

The recall is another indication of just how expensive EV batteries are relative to the cost of the entire car. Until the cost of batteries comes down, through greater production worldwide and economies of scale, the cost of making electric vehicles will remain higher than comparable gasoline cars.

Once batteries do become less expensive, as is expected in the coming years, electric cars could become much cheaper to build because they have fewer moving parts and require as much as 30% fewer hours of labor for assembly compared to traditional vehicles.

Fewer parts on electric vehicles could also mean that auto recalls become less common in the future. But for now, there could be significant costs if battery fire problems require battery replacements.