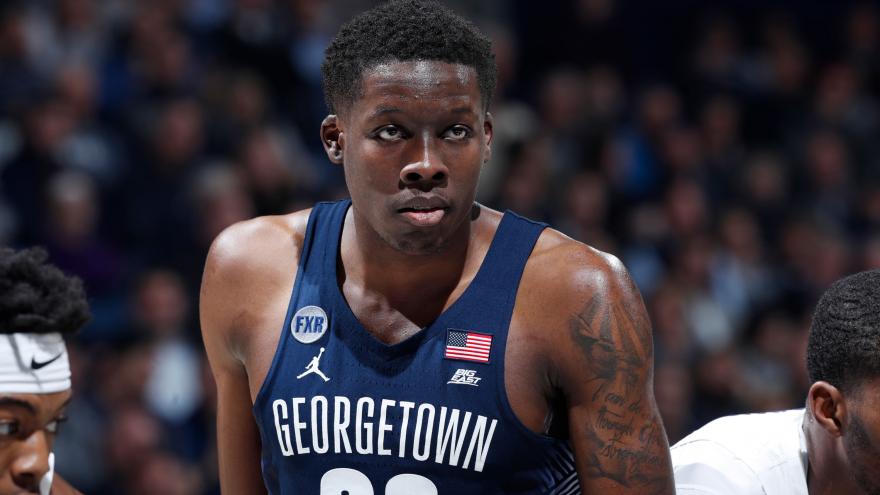 (CNN) -- Two Washington, DC, women have filed civil complaints against Georgetown University basketball players who they say stole items from their home, according to court documents.

The case became public this week after the university announced sophomore Josh LeBlanc would not play the rest of the season, then clarified Tuesday that he was pulled because he intends to transfer.

He and two other Georgetown players -- Myron Gardner and Galen Alexander -- are accused in the alleged burglary, according to civil complaints filed in November by two women. Gardner and Alexander are still on the Hoyas' roster and played in Georgetown's 81-74 victory against Oklahoma State on Wednesday night.

No criminal charges have been filed against any of the men, local police say, but investigations are continuing.

In one police report, one woman says she confronted one of the players on Facetime about items she believes he had a hand in stealing, and he verbally threatened her by saying, "If you tell anyone, we'll send people after you."

The second woman says in her complaint that Gardner sexually harassed and assaulted her in the home, court documents show.

In a police report filed November 4, the two women told investigators that a PlayStation 4, a Nikon camera, a camera lens and a pair of Bape shoes were taken on September 16.

When reached by phone Tuesday, LeBlanc told CNN, "I've got nothing to talk about." He said he did not have a lawyer.

Gardner has not responded to a voicemail seeking comment, but he told the Washington Post on Monday, "I've never done those things in my life."

Attempts to reach Alexander on Tuesday were not successful.

Kristen Metzger, chief spokeswoman for the Metropolitan Police Department said: "This is currently an active investigation. No criminal charges have been made at this time."

Kadia Koroma, spokeswoman for the US Attorney's Office in Washington, said, "It doesn't look like there are criminal charges at this time."

The university's athletic department said in a statement online that conduct violation allegations are investigated by the Office of Student Conduct. It said privacy laws prevent it from commenting on individual cases.

The department says it investigates allegations of wrongdoing before taking disciplinary action on any student.

"While Georgetown refrains from commenting on individual students in accordance with the Family Educational Rights and Privacy Act (FERPA), we take student conduct issues very seriously," the university said Tuesday.

"I expect the highest standard of conduct of my players and they are given no special treatment when it comes to their behavior and discipline."

Director of Intercollegiate Athletics Lee Reed said the university and its athletics program are "working very closely with Coach Ewing and support his efforts to ensure the most careful attention to these issues and support for all of our students."

What the civil complaint says

In her civil complaint, one of the women said she and her roommate fear for their safety.

"I believe that Joshua and his friends stole my items from my house and would like to be reimbursed for (the) items," she wrote.

"Joshua threatened bodily harm against myself and my roommate," she wrote. "He continued to threaten me verbally and via text message in the following week."

The other woman, in a complaint, accuses Gardner of sexual harassment and assault on September 15. A police officer noted in a second incident report that the woman told the investigator a man showed her his clothed erection.

Neither woman immediately responded to CNN's requests for comment.

What's next for Georgetown

The athletic department said student-athletes are subject to the same disciplinary policies and procedures as any other student.

"Both the complainant and the accused student are given the opportunity to provide (to the student conduct office) written and oral statements along with any relevant evidence before disciplinary actions are taken," the department said in its statement. "Once the student conduct process is completed, and if sanctions are imposed by the Office of Student Conduct, coaches may impose additional disciplinary actions, including removal from the team."

The Hoyas are 5-3 this season and play at Southern Methodist University on Saturday.

Another player, who the university said is not involved in the civil allegations, is also leaving the program. Sophomore point guard James Akinjo, last year's Big East freshman of the year, has indicated he will transfer, the school said.