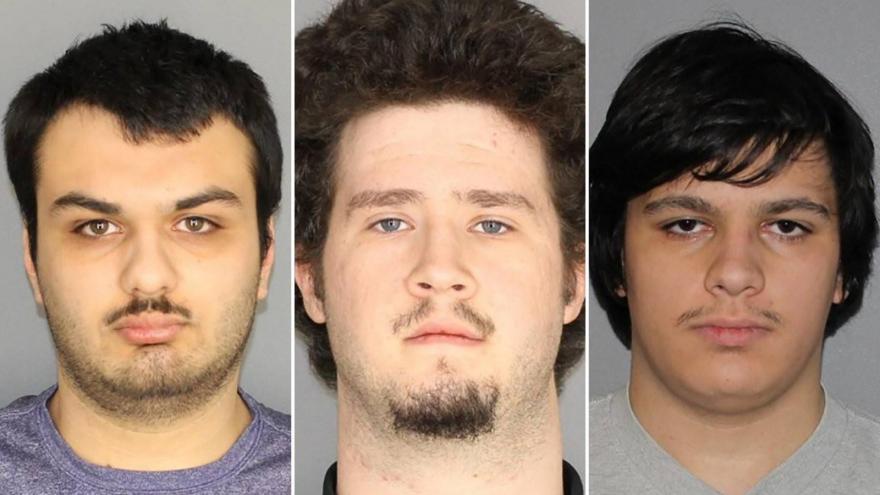 Vincent Vetromile, Brian Colaneri and Andrew Crysel are accused of making bombs for an attack against a Muslim community in upstate New York.

(CNN) -- A day after a student reported a comment made during lunchtime at a school in upstate New York, three men and a teenwere arrested and charged with plotting to attack a Muslim community about 200 miles away.

Brian Colaneri, 20; Vincent Vetromile, 19; Andrew Crysel, 18; and an unidentified 16-year-old male were arrested on Friday in Greece, New York. All are accused of making homemade bombs and plotting to attack the Muslim community of Islamberg in Delaware County, New York.

The 16-year-old male is being classified by police as an "adolescent offender" and his name and photograph have not been released.

All four are from the Rochester, New York, area and have each been charged with three felony counts of criminal possession of a weapon and one felony count of conspiracy, according to Greece Police Sgt. Jared Rene. It was not immediately clear whether the accused had retained attorneys.

Greece Chief of Police Patrick Phelan hailed the swift investigation as an example of how teaching kids to "see something, say something" can work.

Phelan said the investigation began on Friday after a student overheard the 16-year-old showing a photo of another student and making a comment to the effect of, "he looks like the next school shooter, doesn't he?"

That student reported the comment and school security immediately interviewed the students involved in the conversation. School security also notified Greece Police, who took over the quickly expanding investigation that eventually involved the help of New York State Police, federal law enforcement, and officers from other nearby towns.

After conducting further interviews and executing several search warrants, police found 23 firearms and three "improvised explosive devices" associated with the four males, as well as the alleged plot to attack Islamberg. The devices are being analyzed by the FBI at a lab in Quantico, Virginia, Phelan said.

While police would not give details about what the alleged plot against Islamberg entailed, Phelan said it appeared the plot had been in the works for about a month. Three of the four males knew each other through their participation in Boy Scouts, Phelan said.

The Muslims of America Inc., an organization affiliated with the Islamberg community, said Tuesday that news of the alleged plot spread "fear and utter dismay," similar to the unease that the community felt a few years earlier, when a man was convicted of hatching a separate but similar plot against Islamberg.

The organization acknowledged law enforcement officers who thwarted the latest alleged plot and thanked the student who reported the lunchtime comment.

"It is beyond tragic that our nation continues to fester with Islamophobia, hate and religious intolerance," the organization said in a news release. "To bring justice and properly deter similar terrorist plots against our community, we are calling for the individuals charged, as well as their accomplices, to be prosecuted to the fullest extent of the law.

Stephen Hoitt, CEO of the Boy Scouts of America's Seneca Waterways Council, said that "we were shocked and disturbed to learn about the allegations against these individuals."

"Upon learning of these reports we took immediate action to prohibit these individuals from any future participation in the Boy Scouts of America," Hoitt said.

Islamberg is a community of several hundred Muslim Americans located about a three-hour drive northwest of New York City.

The police investigation into the men and their plans is ongoing. Phelan said investigators still need to analyze numerous phones and computers seized during their searches, so more charges could be forthcoming.

A preliminary court hearing is scheduled for Wednesday at 11 a.m.