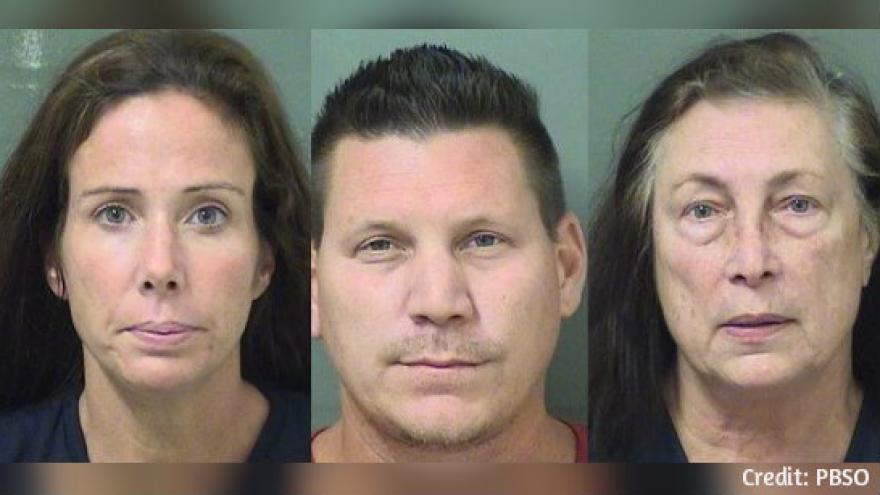 Suburban Lake Worth, FL (WPTV) -- Officials removed a 3-year-old boy from a home with three heroin users and placed them under arrest, according to a Palm Beach County Sheriff’s Office report.

Deputies searching the home on the 7300 block of Ashley Shores Dr near Lake Worth reported finding heroin residue on items next to the child’s toys and where the 3-year-old boy spends time on Jan. 30.

The child’s relationship to the three adults is not immediately clear. Schreckengost and Jeffrey Hanna live at his mother Kay Hanna’s house, county records show. They were all booked into the Palm Beach County Jail Tuesday.

“All are heroin users,” a Palm Beach County assistant state attorney told a judge during their first appearance Wednesday morning.

Small baggies with suspected heroin residue were found inside a tin container on the floor next to the child’s dump truck in front of Jeffrey Hanna and Schreckengost’s bedroom, the report states. Their bathroom had straws, credit cards, and a grinder with white powder.

An open garbage bag had small clear plastic baggies with straws and white powder residue inside, a detective wrote in the report. The bag was hanging from a door well within reach of the child. Schreckengost told the deputy she was “cleaning up” the house and was throwing away the old heroin bags.

Deputies found tub toys for the child, clear plastic baggies, and cut straws with white powder residue inside Kay Hanna’s bathroom. More toys and drug residue were found inside her bedroom. She admitted that the child spends a lot of time in there.

Neighbors in the area told WPTV they noticed strange activity at the home in the last year.

"To the extent that it was going on I didn't realize how bad it really was," Brian Segel said.

DCF told law enforcement they previously made several attempts to check on the welfare of the child inside the home but the family refused, according to the report.

Jeffrey Hanna and Kristine Schreckengost admitted they are longtime drug users and said they openly use drugs in the household, the report states. They said they’ve been trying to help each other stop using drugs without going to a program.

DCF removed the child and placed him with a family member.

Court records suggest the investigation into the home initially started with anonymous complaints to PBSO in June. People reported possible drug activity there, saying they saw people constantly coming and going from the home.

Detectives surveilled the house on June 29 and once they saw Hanna leave in his vehicle, they pulled him over for a traffic stop. His driver’s license was suspended at the time and he had a had an open warrant for failing to appear in court for a previous case, records state.

While Hanna was placed in handcuffs, deputies searched his car and reported finding suspected cocaine and heroin.

An agent asked Hanna if he has a drug problem. Hanna started to cry and admitted to using drugs at his house. He agreed to let the agent search his house, the agent reported.

When they arrived at the house, Schreckengost was checking the mail and also agreed to have them search the home. Hanna led deputies to under his bed where they found heroin capsules and drug paraphernalia.

Hanna was then booked into the Palm Beach County Jail for the failure to appear charge. He was released on his own recognizance later that day.

In December, a judge signed a warrant for Hanna’s arrest for possessing heroin for the June incident. But it was not until the end of January when PBSO went to the house with DCF that the three were placed under arrest for child neglect.

The three were released from the Palm Beach County Jail under supervision on Wednesday. They are ordered to not have alcohol or illegal drugs and are subject to random drug testing.