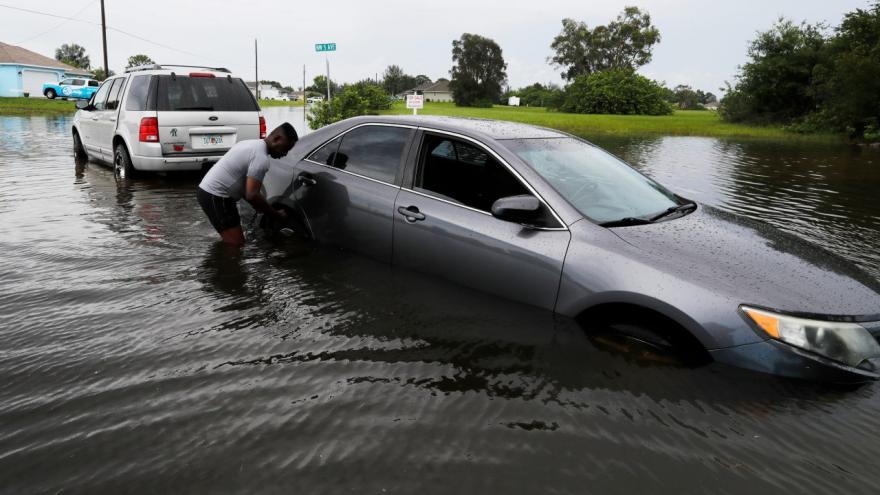 (CNN) -- Tropical Storm Elsa brought heavy rain and high winds to parts of Florida and Georgia on Wednesday, moved into the Carolinas on Thursday and is forecast to race northward up the East Coast over the next few days.

Tornadoes were reported across northern Florida and southwestern Georgia on Wednesday, including one suspected tornado at Naval Submarine Base Kings Bay in Kings Bay, Georgia, on Wednesday evening, which caused multiple injuries and damage.

"Thankfully there was no loss of life here last night. This tornado that came through could have been a lot worse," base commanding officer Capt. Chester Parks told CNN affiliate WJXT.

Parks said a tornado impacted the south side of the base and moved north through the base RV park. Twelve recreational vehicles were damaged and nine people were transported off the base for treatment, he said.

As of 8 a.m. Thursday, Elsa sat over South Carolina with maximum sustained winds of 40 mph. The storm is moving at a brisk pace of 18 mph to the northeast, according to the National Hurricane Center.

In parts of South Carolina, the NHC estimated rainfall totals of 3 to 5 inches with isolated maximum totals of 8 inches through Thursday, which could cause limited flash and urban flooding. Tornadoes are possible across the eastern Carolinas into southeast Virginia through Thursday afternoon, the NHC said.

"The storm's impacts can vary by location," North Carolina Emergency Management Chief of Staff Will Ray said in a statement. "Heavy rain, gusty winds, flooding, (tornadoes) and power outages are all possible with this storm, so please pay close attention to the forecast for your area."

Elsa is expected to maintain tropical storm strength as it moves into the Mid-Atlantic states and toward the northeast US. Tropical storm warnings are in place from Georgia up to New England, a 1,100-mile swath that is home to over 30 million people.

Other parts of the East Coast could see 2 to 4 inches of rain on Thursday through Friday as well. Due to the heavy rainfall, over 50 million people are under flash flood watches from the Carolinas to Maine, including Baltimore, Philadelphia, New York, and Boston.

Elsa's first US target was Florida -- and caused damage and one death near the Georgia-Florida border.

In Jacksonville, Florida, winds from Elsa caused a tree to fall on two cars during an afternoon commute, killing one person, according to Capt. Eric Prosswimmer with the Jacksonville Fire and Rescue Department. A possible tornado touched down in the city Wednesday evening, according to Mayor Lenny Curry.

A few dozen miles away in Cedar Key, part of a roof's surface had been lifted from a motel, photos taken by motel guest Jonathan Riches showed.

"Winds starting howling in the middle of the night, and rain starting pounding the windows," Riches told CNN, adding about the conditions: "Never seen anything like this before in my life."

"As these things go, probably as minimal impact as we would have anticipated if we went back four or five days. There was not any widespread property damage," he said during a Thursday news conference in Surfside, Florida.

DeSantis also addressed the one death in the state. "We're obviously very, very sad to see that," he said.