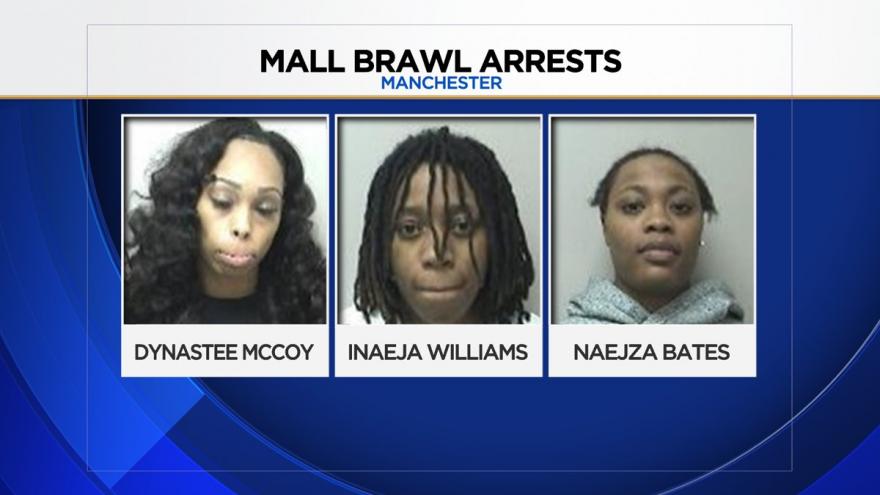 Manchester, CT (WFSB) -- Manchester Police said they made four arrests following a brawl that involved up to 300 people at Buckland Hills Mall on Wednesday.

Around 6 p.m. officers responded to a report of a large fight and disturbances inside of the mall involving mostly juveniles.

Lieutenant Ryan Shea said the initial fight started in front of Forever 21 and spread to other parts of the mall.

Police said they discovered a .22 cal Taurus 228 pistol tucked into the waistband of a 17-year-old male who refused to leave.

The teenager was arrested and charged with breach of peace, interfering with officers, inciting a riot, criminal trespass, and carrying a pistol without a permit.

Dynastee McCoy, 19, of Wethersfield was arrested and charged with breach of peace, interfering with officers, and inciting a riot.

Police said McCoy was involved in the initial fight.

Additionally, Inaeja Williams, 18, of Hartford, and Naejza Bates, 18, from New Britain, were arrested and charged with breach of peace, interfering with officers, and inciting a riot.

Manchester Police are trying to determine if the incident was pre-planned.

A similar incident happened in 2016 at the mall. Police believe that incident was planned on social media.

It is unknown at this time if the fights are related to those that caused the CT Post Mall in Milford to close early this evening.

South Windsor police said they assisted in the investigation and responded to nearby Walmart for disturbances. They also were called to Target where a group was seen heading.

Both stores were secured by police and officers continued to patrol the area.