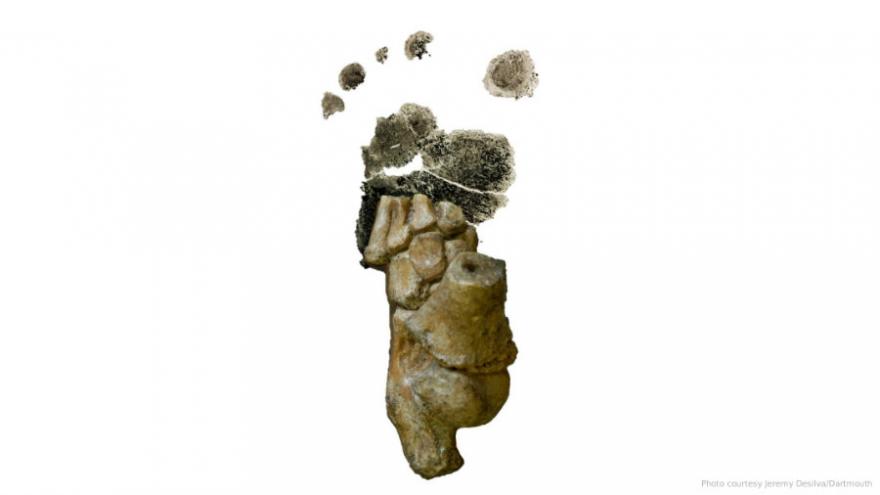 (CNN) -- More than 3 million years after she died, the fossil of a tiny female toddler is providing a unique look at how the children of our early human ancestors lived.

Her nickname is Selam, which means "peace" in the Ethiopian Amharic language. Selam was a hominin, an early human ancestor called Australopithecus afarensis. When she died, she was almost 3 years old.

Her nearly complete skeleton was discovered in the Dikika region of Ethiopia in 2002 by Zeresenay Alemseged, paleontologist and professor of organismal biology and anatomy and the University of Chicago. But freeing Selam from the ground took years. She was encased in sediment that was millions of years old, and researchers had to be extremely careful.

One of the more recent elements of her skeleton to be studied is her foot, which is detailed in a study published Wednesday in the journal Science Advances.

"For the first time, we have an amazing window into what walking was like for a 2½-year-old, more than 3 million years ago," Jeremy DeSilva, lead study author and an associate professor of anthropology at Dartmouth College, said in a statement. "This is the most complete foot of an ancient juvenile ever discovered."

It's rare to find juvenile skeletons of human hominin ancestors, especially ones that are well-preserved.

"Studying younger individuals is important because the morphology that you see in adults is the result of both their evolution through time and how they changed as they grew," Alemseged, senior author of the study, wrote in an email.

Before this discovery, the oldest and most complete fossilized foot was 1.8 million years old and belonged to a Homo habilis, nicknamed OH 8.

Australopithecus afarensis walked upright. But there are ape-like features about afarensis, as well. Selam would have been similar in size to a chimpanzee that was about the same age -- which meant she also depended on her mother. Selam most likely clung to her mother as she foraged for food or spent time in trees.

For reference, Lucy, the world's most famous fossil and another example of Australopithecus afarensis that lived 3.18 million years ago, was about 3½ feet tall and 60 pounds. Analysis of her skeleton and teeth shows that she had reached maturity, but not unlike chimpanzees, her species matured young. A 2016 study of what might have caused her death estimates that she was 15 or 16 years old.

Although Lucy and Selam were found in the same area, Selam is not "Lucy's baby." Selam lived more than 200,000 years before Lucy.

Given afarensis' size, predators such as hyenas, jackals and saber-toothed cats would have posed a threat. Trees provided safety, whether escaping a predator or nesting at night. Based on data on the nesting habits of chimps, researchers estimate that an average of 46 feet above the ground made them feel safe.

"If you were living in Africa 3 million years ago without fire, without structures, and without any means of defense, you'd better be able get up in a tree when the sun goes down," DeSilva said in a statement.

Selam and Lucy would have stood up straight, with feet, knees and hips that are similar to ours. If you saw her walking from afar, you would think Lucy was human by her silhouette. But up close, she had a small head, a brain comparable in size to a chimpanzee's, longer arms and hair covering her body.

Bridging the gap between humans and chimps, Lucy had slightly curved fingers and toes, with mobile ankles and shoulders that provided more overhead range of movement. Even with those abilities, she would have been better at walking than climbing.

The anatomy of Selam's foot was incredibly well-preserved, allowing the researchers to study how a toddler hominin would have walked. At 2½ years old, Selam would've been walking on two legs.

But when researchers analyzed the skeletal structure of Selam's foot, they noticed that the base of the big toe would have allowed her to be a great climber. So although the afarensis toddlers could walk, they probably spent more time in trees than on foot, unlike adults. This is an ape-like pattern, the researchers said.

"For me the surprise was finding features that are ape-like in an otherwise human-like foot," Alemseged said.

Their findings suggest that afarensis had human and ape-like traits based on their selective advantage, which also shows the "mosaic nature" behind the evolution of walking upright and skeletal evolution, Alemseged said.

A 2012 study of Selam's complete shoulder blades also showed them to be apelike because they were adapted for climbing trees. Shoulder blades are an incredibly rare find because they're delicate, almost paper thin, and don't usually fossilize.

A 2017 study of her nearly intact spinal column, vertebral bones, neck and rib cage also revealed that part of human skeletal structure was established millions of years before expected. Like modern humans, Selam had 12 thoracic vertebrae and 12 pair of ribs -- fewer than most apes.

Alemseged believes that all of this evidence combined shows what a critical, pivotal species afarensis was for human evolution.

"Understanding if climbing was part of a species' adaptation and to what extent are crucial," Alemseged said. "That tells us a lot about its ecology and the type of selection forces that were acting on it. The new study supports many previous studies that the foot in A. afarensis was adapted for upright walking and was largely human-like. It also reveals that a few features, especially mobility, are a bit different."