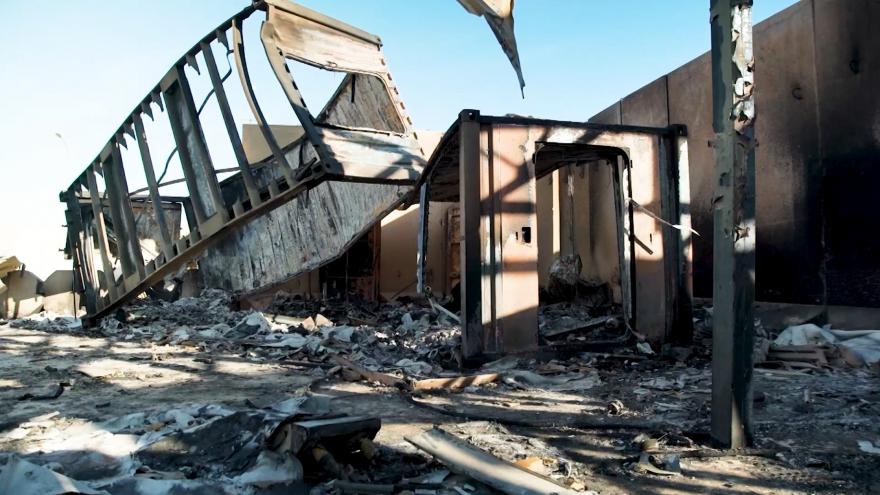 Thirty-four US service members have been diagnosed with traumatic brain injuries following the Iranian missile attack on US forces in Iraq earlier this month, Pentagon spokesman Jonathon Hoffman said. A picture of the destruction left at Al Asad base in Iraq after it was struck by Iranian missiles. Credit: CNN
By Ryan Browne, Barbara Starr and Veronica Stracqualursi, CNN

Seventeen service members who were injured have since returned to duty in Iraq, sixteen of whom were treated locally in the country.

Earlier this week President Donald Trump said he does not consider potential brain injuries to be as serious as physical combat wounds, downplaying the severity of the injuries suffered in Iraq.

During the World Economic Forum in Davos, Switzerland, Trump was asked to explain the discrepancy between his previous comments that no US service member was harmed in the January 8 Iranian missile attack on Al-Asad airbase in Iraq, and the latest reports of US troops being treated for injuries sustained in that attack.

"No, I heard that they had headaches, and a couple of other things, but I would say, and I can report, it's not very serious," Trump replied during a news conference.

The Pentagon and Trump had initially said no service members were injured or killed in the January 8 Iranian missile attack, which was retaliation for the January 2 US drone strike that killed a top Iranian general.

Last week, US Central Command said that 11 service members were treated for concussion symptoms from the attack.

The most common form of TBIs in the military are mild TBIs, according to the Defense and Veterans Brain Injury Center.

Traumatic brain injuries are not always apparent immediately after they've been suffered.