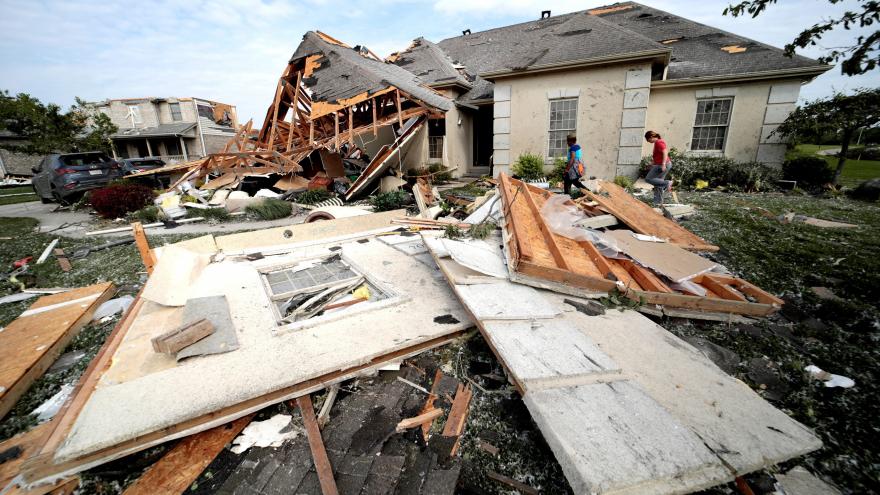 More than 39 million people are under an enhanced risk of severe weather from northeastern Texas through the Ohio Valley and into the Northeast. Source: Kyle Grillot/REUTERS
By Christina Maxouris, CNN

(CNN) -- Fierce thunderstorms and deadly floods are putting millions at risk across the Midwest and Northeast, following on the heels of twisters that slammed the same part of the country.

One person was killed in Arkansas Tuesday evening after drowning in floodwater, police told CNN.

Authorities said the vehicle appeared to have driven into a flooded roadway that had been barricaded. A deputy sheriff saw a body floating in the water and attempted a rescue, Breeden said. The man's body was located near Fort Chafee.

The flooding in Arkansas is part of the severe weather facing several states across the country.

More than 39 million people are under an enhanced risk of severe weather from northeastern Texas through the Ohio Valley and into the Northeast, CNN Meteorologist Michael Guy said, with the main threats starting Wednesday afternoon.

The National Weather Service said areas from Texas through the Mid-Atlantic Coast can expect severe storms, with "multiple rounds of storms expected in some areas."

"A concentration of strong thunderstorms with heavy rainfall" will continue in parts of Missouri, Iowa and Illinois with ongoing flash flooding, the weather service said.

Hourly rain totals of up to 2 inches are possible, with some areas seeing up to 3 inches.

Kansas City, Missouri, could see hail up to an inch in diameter, the weather service said, and wind gusts of up to 60 mph as severe storms continue into Wednesday evening.

As storms move through the region, the primary concern will be flooding, the weather service in Illinois said.

Some places will see 'historic' flooding

The Arkansas River is expected to crestWednesday afternoon at around 41 feet, Arkansas emergency management told CNN.

"This is looking to be record-breaking all along the Arkansas River, and this is something we have never seen before," spokeswoman Melody Daniel said.

All the levees set up have worked so far, Daniel said. Two of them have overtopped, but have not failed.

"This is the highest the river has ever been in recorded history," Breeden told CNN.

Up to 50 homes could be impacted by the floods, the city of North Little Rock said on Facebook. Any significant rainfall could affect drainage issues and increase the number of homes that will be impacted.

"Respect all barricades and road and trail closures," the city posted. "They are there for your protection. Do not put our emergency responders in a position that would be dangerous to you and them."

In Ozark, Arkansas, the river will likely break its record Thursday before it crests Friday, Guy said.

Flooding near the site already occurred once this year in early January.

Further north, officials are warning of fast rises on the lower Des Moines River in Iowa and on the Fox River in northeastern Missouri. Both are expected to reach major flood stage -- which could lead to flooding -- by Wednesday.

The city received 1.56 inches of rainfall which boosted the monthly total to 12.81 inches. The previous record for the month of May was set in 1995 at 12.75 inches.

"This also makes this May the 3rd wettest month for ANY month in (Kansas City's) 131-year period of record," the weather service tweeted.

The past 13 days have seen twisters touch down in multiple cities throughout the country. Since Monday, there's been 76 tornado reports.

In western Ohio, which was ravaged by three tornadoes Monday night, one person was killed in the city of Celina, and seven others were injured, Mayor Jeff Hazel said.

The storm apparently pushed a vehicle into a house there, killing 81-year-old Melvin Dale Hanna, the mayor said.

A tornado ripped through Linwood, Kansas, late Tuesday evening, but all residents appeared to be safe.

Homes outside the city's limits were "all gone," Mayor Brian Christenson told CNN.

Damage from the storms that swirled through Kansas Tuesday was centralized in three areas around Douglas County, Sgt. Kristen Channel with the Douglas County Sheriff's Department told CNN.

Homes near Lone Star Lake, Pleasant Grove and Berg Acres -- which are all about two miles south of Lawrence -- were all damaged.

There are currently no reports of fatalities, Channel said, but some people had to be taken to the hospital after suffering storm-related injuries.

Another tornado was confirmed by the National Weather Service in Berks County, Pennsylvania, "based on video received showing a tornado on the ground." It moved through the area Tuesday evening.

Morgantown was one of the hardest-hit areas in the county, but Caernarvon Township Police Department Chief John Scalia told CNN affiliate KYW there were no injuries.

"When you drive around, see the destruction, you realize how lucky we are nobody was hurt," Scalia said.

More than 1,000 flights delayed or canceled

As storms moved through eastern Kansas and western Missouri Tuesday night, the Kansas City International Airport halted all flights late Tuesday and crews worked to clear debris out of the runways.

The airport re-opened early Wednesday and said on Twitter: "We apologize for the inconvenience. A tornado destroyed homes and businesses miles away & debris rained down onto the airport. Our crews had to clean it up in order to be safe."

Nearly 900 flights headed into and out of Chicago's O'Hare International Airport were delayed early Wednesday and another 166 were canceled, according to FlightAware.com

Record-breaking tornadoes in the past month

There was an EF-1 tornado south of Tarlton and two EF-0 spinners in Miami and Montgomery counties, near Phillipsburg and southeast of Circleville.

In the past 30 days, there have been more than 500 tornado reports across the country.

There are only four other recorded instances when more than 500 US tornadoes were observed in a 30-day period: in 2003, 2004, 2008 and 2011, according to Patrick Marsh, a meteorologist with the weather service's Storm Prediction Center.