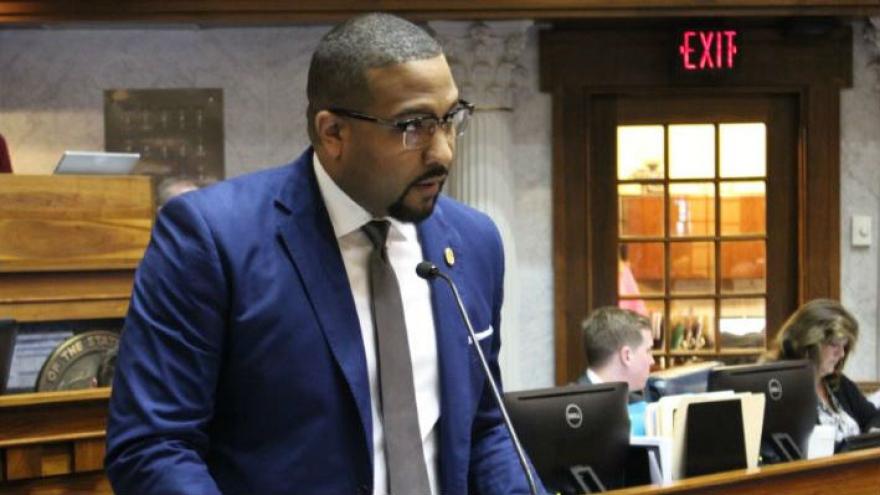 INDIANAPOLIS (AP) — A Democratic state senator formally entered the Indiana governor's race Tuesday with the state's Republican schools chief by his side.

First-term state Sen. Eddie Melton announced his campaign before several dozen supporters in his northwestern Indiana hometown of Gary. Melton is the third Democrat to enter the race for the party's nomination to challenge Republican Gov. Eric Holcomb in next year's election.

Republican state schools Superintendent Jennifer McCormick introduced Melton as a great legislator who reached out to her in bipartisanship to discuss education issues. McCormick drew a rebuke from top Republicans when she joined Melton at several public meetings over the summer as he considered entering the governor's race.

"A lot of people in the state of Indiana feel that state government is not paying attention, is not focusing on issues that concern them and matter to them the most," Melton told The Associated Press ahead of his announcement. "These are things that people across the board feel, that we as a state are not being responsive enough."

Holcomb has a big front-runner advantage while he seeks re-election, with at least $6 million in his campaign account and Republicans holding every statewide elected offices and supermajorities in both chambers of the Legislature. Holcomb has touted what he says are record hiring commitments from businesses since he took office in 2017 and investments in numerous infrastructure projects that were made while managing to protect the state's top-level credit rating and $2 billion surplus.

He has become the point person for Senate Democrats on education issues, pushing a plan during this year's legislative session that sought to guarantee a minimum 5% pay raise for teachers by reducing state funding for vouchers for students to attend private schools, eliminating proposed funding increases for charter schools and stretching out state payments toward a teacher pension fund.

The proposal was rejected by the Republican-dominated Senate, which backed a new state budget that boosts base school spending by 2.5% in each of the next two years.

McCormick's participation with Melton lays bare her split from Holcomb and GOP legislative leaders since she was elected to be state schools superintendent in 2016 with Republican Party support. She has disagreed with Republicans legislators on issues including the use of standardized testing to rate schools and teachers, and her support for increased scrutiny of charter and voucher schools that receive state money.

State GOP Chairman Kyle Hupfer, who is Holcomb's campaign manager, blasted McCormick in July as "auditioning" for the Democratic lieutenant governor nomination and questioning whether she is still a Republican.

McCormick said in a recent interview that such reaction was "comical" and "disappointing."

"We see all that happening at the federal level, where it is so polarizing that it's disgusting," she told The Associated Press. "I was hoping at the Indiana level, the state level, that we could at least be a model to show that you can come together in thought and come together and reach across the aisle in support."

Holcomb wouldn't discuss on Tuesday what he called the Democrats' "intramural competition," or the split with McCormick.

"Her decisions are her decisions alone," Holcomb said. "I'm going to continue to do my job. One that I enjoy."

Myers and Melton are black, and if either is nominated, he would be the first African American on the Democratic or Republican ticket for Indiana governor or lieutenant governor. Owens is trying to become the first openly gay gubernatorial nominee.

Indiana Democratic leaders for many years have worked to avoid primary contests for statewide races, seeking to maintain party unity and preserve campaign cash for the November elections.

Democratic state Rep. Robin Shackleford of Indianapolis, who chairs the Indiana Black Legislative Caucus, said that although that group is endorsing Melton, she doesn't think a contested primary would divide African Americans or other Democrats.

"I don't think this race will create any more controversy within the party just because we have three qualified candidates there," she said. "Whoever comes out and wins, I don't think it's going to leave a tear between the Democrats."