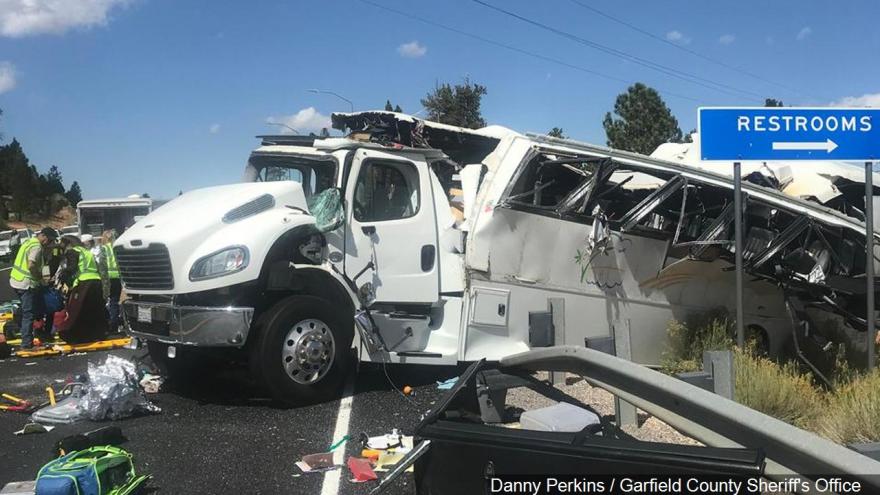 PANGUITCH, Utah (AP) — Four Chinese tourists killed in a bus crash in southern Utah near a national park were in their 60s and from Shanghai.

Three women and one man died in the crash on a highway running through the red-rock landscape near Bryce Canyon National Park on Friday. The victims have been identified as Ling Geng, 68, Xiuyun Chen, 67, Zhang Caiyu, 62, and Zhongliang Qiu, 65, according to the Utah Highway Patrol.

Authorities believe the driver swerved on the way to the park on Friday morning. But when he yanked the steering wheel to put the bus back onto the road, the momentum sent the bus into a rollover crash, authorities said.

The National Transportation Safety Board, which sent a team to investigate, was planning a media briefing Sunday evening to discuss the initial findings.

The deceased were part of a group made up of 29 tourists and one leader. They come from Shanghai and the nearby provinces of Zhejiang, Jiangsu and Heilongjiang, according to a news report on the media website huanqiu.com. The tour leader came from Hebei Province, near Beijing, according to the Zhejiang Online news site. The tour group was dispatching employees from China to help those injured.

Five passengers were in critical condition as of the latest update from hospital officials Friday night.

The driver, an American citizen, survived and was talking with investigators, Street said. He didn't appear to be intoxicated, but authorities were still investigating his condition as well as any possible mechanical problems, he said.

All 31 people on board were hurt. Twelve to 15 on board were considered to be in critical condition shortly after the crash, but several of them have since improved, Street said. Not everyone was wearing a seatbelt, as is common in tour buses, he said.

The Shanghai Municipal Bureau of Culture and Tourism urged the travel agency, Shanghai Zhuyuan International Travel Agency, to spare no effort in rescuing the injured and properly handle the follow-up matters.

The News Perspective program, part of the Shanghai Media Group, said in an article on its official social media account that seven relatives of the victims were expected to leave for the United States on Monday or Tuesday with travel agency staff and officials from the culture and tourism bureau.

The news program's social media post included photos of parts of the itinerary, indicating the accident occurred on the seventh day of a 16-day trip and also included visits to Yellowstone National Park, Salt Lake City and Las Vegas. They were to fly to the East Coast after the western U.S. stops.

The crash left the top of a white bus smashed in and one side peeling away as the vehicle came to rest mostly off the side of the road against a sign for restrooms.

The company listed on the bus was America Shengjia Inc. Utah business records indicate it is based in Monterey Park, California. A woman answering the phone there did not have immediate comment.

Millions of people visit Utah's five national parks every year. Last year, about 87,000 people from China visited the state, making them the fastest-growing group of Utah tourists, according to state data.

More than half of visitors from China travel on tour buses, said Vicki Varela, managing director of Utah Office of Tourism.

"You have a group from China who have worked hard to come to the states, got the visa and everything they needed, excited about it, and for a tragedy like this to happen it just makes it all the more tragic," Street said.