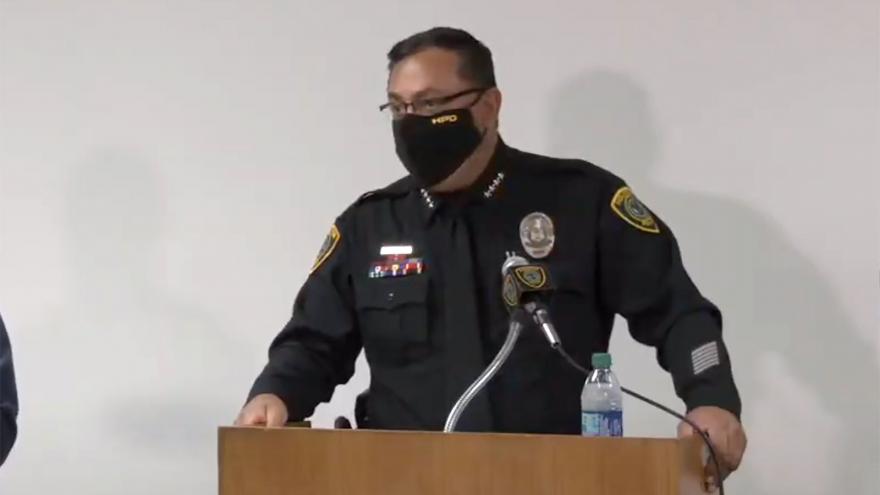 Houston Police Chief Art Acevedo speaks about the officer-involved shooting of Nicolas Chavez in April at a news conference on Sept. 9.

(CNN) -- Four Houston police officers have been fired for fatally shooting an apparently emotionally disturbed man who was on the ground, wounded and incapacitated, before a final volley of 21 shots, officials said.

Acevedo said Thursday that Chavez had been incapacitated by multiple Taser cartridges, bean bags and three gunshots before the four officers fired -- after he was down -- a total of 21 shots in the final moments of a 15-minute encounter.

Before the final burst of gunfire, Chavez is seen in video crawling and pulling at wires attached to a police Taser. "Don't do it," an officer is heard saying. The gunfire erupted as he cradled the Taser in his hand.

Acevedo said the two cartridges in the Taser had been discharged.

The chief, speaking hours after the police union condemned their termination, said the officers are appealing.

Acevedo said that even after repeated verbal warnings, the deployment of multiple soft impact rounds and the two Tasers, Chavez was still "armed with a metal object and began moving quickly toward" the officer who fired the first two shots.

But he called the barrage of gunfire at the end unreasonable.

He added, "You don't get to shoot somebody 21 times because at that time, when we discharged those 21 rounds, Mr. Chavez was at his greatest level of incapacitation."

The incident started with several 911 calls about an apparently emotionally disturbed man jumping in front of cars and entering backyards.

Acevedo said toxicology tests revealed Chavez had methamphetamine, amphetamine and ethanol in his system when he died.

"Hey, bud, we're here to help you, man," one officer is heard saying.

Acevedo said Chavez was hit with numerous Taser cartridges, and bean bags, as well three gunshots -- which the department deemed "objectively reasonable" based on the totality of the circumstances and the facts this case before the final burst of gunfire.

"In this case, I have concluded there was no imminent threat to any police officer, and they could have returned home to their families," an emotional Mayor Sylvester Turner told reporters, adding that the firings were not an indictment of the entire 5,300-officer department.

Union officials said the encounter lasted about 15 minutes, during which the officers attempted to de-escalate the incident by retreating, firing bean bags and using Tasers on the man before resorting to lethal force when he pointed a stun gun at them.

Relatives of Chavez have said he was suffering a mental health crisis at the time, CNN affiliate KRPC reported.

The Harris County district attorney is investigating the shooting.

Joe Gamaldi, union president and also national vice president of the Fraternal Order of Police, tamped down speculation that the incident was racially motivated. Chavez was Latino, he said. Three of the officers are Latino and the fourth is married to a Latina.

"It was clear ... these officers did not want to shoot Mr. Chavez and did everything in their power not to," Gamaldi told reporters.

Douglas Griffith, the union's first vice president, who said he was called to the scene after the shooting, also defended the officers. He said they were young, with little time on the job, and that their actions were considered justified by an internal police disciplinary committee investigation and some civilian members of an independent police oversight board.

The shooting was "obviously suicide by cop" and reflected the department's failure to properly train officers, he said.

The officers "begged and pleaded" with Chavez to surrender, according to Gamaldi. Chavez told the officers several times that he wanted to be shot, Gamaldi said.

"They did everything that everyone across this country is asking for law enforcement to do," Gamaldi said of the officers. "They de-escalated and retreated for 15 minutes -- 15 minutes! They used every non-lethal option available. Multiple bean bag shotgun rounds until they ran out. They used multiple Tasers all while giving verbal commands to Mr. Chavez to give up peacefully that he did not adhere to."

Gamaldi called the firings "unjust" and "deplorable," claiming the victim was attempting to die via suicide by cop. The officers used restraint and "every non-lethal option available" until, according to Gamaldi, Chavez pointed a Taser at them.

"This has sent a shockwave through our department -- that even if you de-escalate, even if you retreat, even if you follow policy, training and the law, you will still lose your job as a Houston police officer," Gamaldi said.