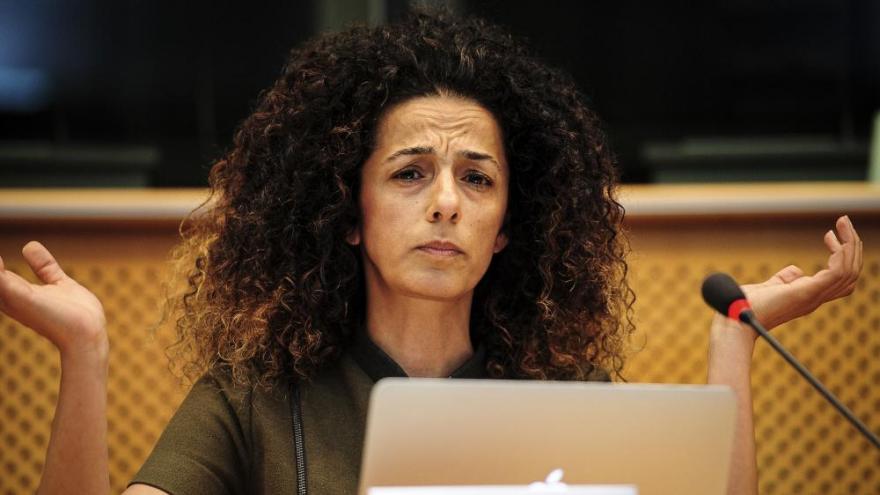 Iranian journalist and writer Masih Alinejad listens during an event at European Parliament headquarters in Brussels in 2016. Four Iranian nationals have been charged in an alleged plot to kidnap the US journalist and human rights activist from New York, court documents show.

(CNN) -- Four Iranian nationals have been charged in an alleged plot to kidnap a US journalist and human rights activist from New York, court documents show.

According to an indictment unsealed in a New York federal court Tuesday, Alireza Shavaroghi Farahani, aka Vezerat Salimi and Haj Ali, 50; Mahmoud Khazein, 42; Kiya Sadeghi, 35; and Omid Noori, 45, all of Iran, conspired to kidnap a Brooklyn journalist critical of the Iranian regime.

The four were charged with conspiracies related to kidnapping, sanctions violations, bank and wire fraud, and money laundering, according to the indictment. They are based in Iran and remain at large, authorities said.

"As alleged, four of the defendants monitored and planned to kidnap a U.S. citizen of Iranian origin who has been critical of the regime's autocracy, and to forcibly take their intended victim to Iran, where the victim's fate would have been uncertain at best," US Attorney for the Southern District of New York Audrey Strauss said in a news release Tuesday.

A fifth person, Niloufar "Nellie" Bahadorifar, was also charged with sanctions violations conspiracy, bank and wire fraud conspiracy, money laundering conspiracy, and structuring charges for allegedly providing financial services that supported the plot, according to the attorney's office. Bahadorifar, a California resident originally from Iran, was arrested on July 1 in California and arraigned on July 8, prosecutors said.

Masih Alinejad, an activist with over 5 million followers on Instagram, said she is the journalist targeted in the plot. The US Attorney's Office declined comment on the case.

Speaking to CNN on Wednesday morning, Alinejad said the FBI approached her about 8 months ago and said her house was not safe.

"And I was like, you must be kidding me because I receive daily death threats, what's new? I'm here in America, they cannot do anything," she said. The FBI then revealed photos of her "private life" allegedly taken by private investigators at her home, and she said she was shocked the Iranian government got close to her "and then I took it serious."

She was under FBI protection until now, she told CNN, adding that she was in different safe houses for her protection. Still, she said she would not stop her activism, in which she shares photos and videos of "voiceless" Iranian mothers protesting the regime, she said.

"Not at all, you know why? Because these mothers are my heroes. Millions of Iranians who share photos and videos of themselves practicing their civil disobedience, those are the Rosa Parks of Iran," she said. "They are my heroes. To be honest, I have fear inside me, but what gives me power, these people. I am going to stop my activities the day when the Iranian people stop saying no to the Islamic Republic."

"This is not the first time that the United States has undertaken such Hollywood scenarios," he said.

"The US government's new claim ... is baseless and ridiculous and is not really worth answering," he added.

The alleged details of the plot

Before the alleged kidnapping plot, the indictment said, the government of Iran tried to lure Alinejad, referred to as Victim-1 in the indictment, by having her relatives who lived in Iran invite her to travel to a third country, with the apparent purpose of having her "detained and transported to Iran for imprisonment."

Her relatives did not accept the offer, prosecutors said in their statement.

According to the indictment Farahani, an Iranian intelligence officer who resides in Iran, and his network, allegedly hired private investigators, "to surveil, photograph and video record Victim-1 and Victim-1's household members in Brooklyn."

Farahani's network procured days' worth of video and photographs and installed a live high-definition video feed of the victim's home.

According to officials, Farahani's network has targeted other victims in other countries such as Canada, the United Kingdom and the United Arab Emirates.

"This is not some far-fetched movie plot. We allege a group, backed by the Iranian government, conspired to kidnap a U.S. based journalist here on our soil and forcibly return her to Iran. Not on our watch," FBI Assistant Director William F. Sweeney Jr. said. "When we find you, you will be brought here and held accountable under U.S. law."